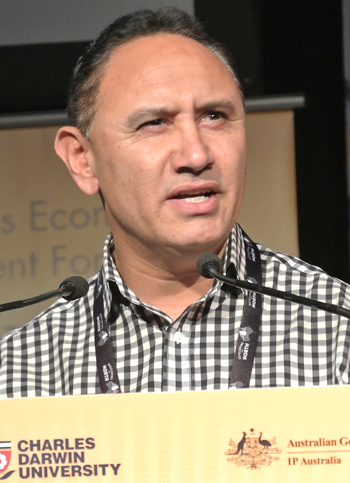 The Ayers Rock Resort, owned by the Indigenous Land Corporation, is finding it exceedingly difficult to recruit staff from Central Australia, or retain for its workforce local young people trained at the resort.

There are 280 indigenous employees who make up 34% of the total resort workforce of more than 800.

“We are striving to raise this to 50% by 2018,” says Michael Parkins (pictured), general manager of the resort-based National Indigenous Training Academy.

But only “a handful” are from Central Australia, he says, and “maybe 10 at the most” in the indigenous trainee program are from The Centre.

Mr Parkins was a keynote speaker at the Indigenous Economic Development Forum in Alice Springs this week (delegates posing for a group photo – below – yesterday).

He told the Alice Springs News Online the resort has been “heavily recruiting in the eastern states as of last financial year.

“As of this financial year we will be targeting our recruitment more to the Northern Territory and our neighbouring states because, in a way, we have neglected these states.”

He says “word of mouth” has helped to source staff from the eastern states: “That’s where recruitment has initially started. Word of mouth has given us the numbers and the quality.

“I am very mindful we need a wider cross section.”

Why is there less interest in working in the resort from people in Central Australia, including the Pitjantjatjara Lands?

“We rely heavily on job service providers back in the day, or Job Actives they are now called, to do the screening and assessing to find suitable candidates,” says Mr Parkins.

“We have tried here in Alice Springs but it just hasn’t been successful as we had hoped.

“The connection with the job service providers here in Alice Springs failed. We just didn’t have the suitable numbers or the quality required.

“In terms of our screening and assessment we need certain levels of language literacy and numeracy, and obviously a good attitude, the willingness to relocate from home, four hours down the road.

“One of our new job service providers, Maxx Employment, has opened an office here in Alice in June. We are very hopeful they will be attracting a lot more staff. They are the main providers we’re also using in other states.”

NEWS: Not much traveling is required from Mutitjulu, Imanpa and Docker River. Do you get interest from job seekers there?

PARKINS: Not as much. We mainly focus on our “schools to work experience” program there, provided by our National Indigenous Training Academy. It operates within the resort. Voyages owns the academy. We find that’s a more ideal pathway into the workplace exposure the Ayers Rock Resort can offer to children from local communities.

NEWS: How many young people in that program have actually taken jobs at the resort?

PARKINS: We’ve had at least four who have finished the traineeship program, then returned back to their communities to source a role within education. They didn’t stay with the Ayers Rock Resort. We provided the training for the 12 months, they graduated and due to family obligations had to go back to their communities. They picked up a role back home as a result of the education we provided them. So, for me as an Indigenous person, that’s an outcome for us, anyway, regardless of whether they become an employee of the resort.

NEWS: So they would become a teacher’s aide in their home community, for example.

NEWS: How many students have done Certificate Three?

PARKINS: Last financial year we had 95. The target is 100 per year. The average tenure at the resort after completion is about 14 months, which is higher than for the non-Indigenous workforce which is around 10 months.

NEWS: Where to from there?