Jacinta, Jamie into the deep end 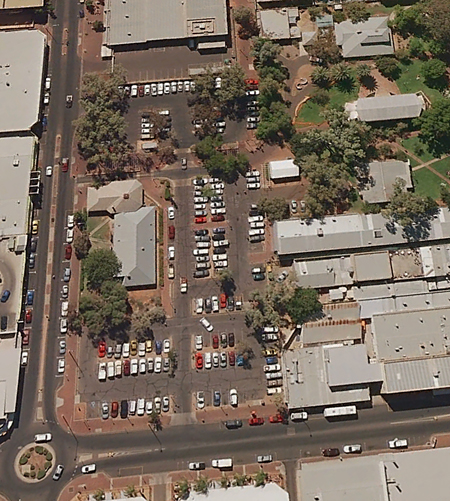 A five-storey, $20m car park, office and accommodation project in Hartley Street (pictured), extension of the landfill, keeping kids from causing mayhem over summer and turning pop-ups into real businesses will be in the diaries of the new blood in the town council, likely to be Jamie de Brenni and Jacinta Price.

Mayor Damien Ryan spoke with the Alice Springs News Online about a busy agenda for the nearly two years that remain of the council’s term.

NEWS: Mr de Brenni and Ms Price are likely to be the new councillors by week’s end. Is that a political lurch to the right for the council?

RYAN: I’d leave that up to you [to speculate], Erwin. My interest is to work with eight other individuals in local government, and have some good outcomes for our community. Always has been.

NEWS: A multi storey car park in Hartley Street is on the agenda.

RYAN: We’ve made an application for a Federal Government Stronger Futures grant. Yes, we’d like to see that happen. The application is for $9m. We see it as a $20m project, five storeys high, including three storeys of under cover car parking, plus office and commercial space, and residential units. We hope to have a reply from the Feds by the end of this year.

NEWS: Is a car park the right thing to put into such a prominent space? Given our need to regain lost ground in tourism, do you think someone in Frankfurt would embark on a 40 hour flight to see a car park in Alice Springs? Should that space not be for something much more attractive?

RYAN: Parking is very restricted in the CBD and has continued to shrink in a number of years. Council is going to have to address this issue.

NEWS: How many people working in the CBD nine to five, or similar hours, are taking up car parking there now?

RYAN: When you look at the car parks that are full during working hours versus what car parks are empty on weekends or after hours it’s pretty clear there is a very big need for car parking so that our visitors can get into the CBD also.

NEWS: Do you regard as an option that people walk to work, ride their pushbikes or take public transport, and should that be promoted?

RYAN: All reports on cycling show we have a far greater cycling community than other communities of our size. There are a lot of people who walk, as you can see in the morning. Others need a car and that’s what we need to cater for.

NEWS: Is there a clear picture how many of the parkers are shoppers, workers or tourists?

RYAN: [When you consider] the Melanka site, which has cars all over it and is not a designated parking area, when that building goes ahead these cars will need somewhere else to be parked.

NEWS: There is a need to extend the landfill. The two options are to extend it further west into the national park, or retain the much acclaimed new transfer station and dispose of the garbage elsewhere, away from the current central location. Which option will prevail?

RYAN: The commitment we’ve made to extend the life of the current landfill is very prominent. That’s why the investment in the transfer station was made. The management of our waste has improved immensely in the last three years.

NEWS: The transfer station can serve either option.

RYAN: The cost of moving to a new location is way beyond the means of this community as far as ratepayers are concerned.

NEWS: The sewage disposal facility is still plagued by foul smells. The managers of Blatherskite Park are looking at a range of developments, as I understand it, with or without the involvement of The Hatzimilhail Group. The Ulysses bikers dubbed their recent national convention held at the show grounds the Smelly AGM.

RYAN: That’s a question that council would love to see addressed. But as you know we don’t have responsibility for power, water and sewerage. Council continues to work with government in every facet that it can. It is continually an advocate for things to be done.

NEWS: What is the council’s preferred sewerage disposal option that it is putting to government?

RYAN: You can discuss the sewerage question with Power and Water.

NEWS: I am asking you whether the council has a view that it is putting to the government.

RYAN: [Sewerage] is not on [council’s] agenda at this stage because it is not [council’s] responsibility.

NEWS: Several candidates made the point that the council role goes beyond rates, roads and rubbish, that it speaks for the town on issues involving the other tiers of government.

RYAN: We do, and we are active in a broad range of community, sports and arts initiatives.

NEWS: Could that extend to lobbying about the sewerage management?

RYAN: The council’s role is to work with both levels of government above us and have partnerships with organisations like Tourism Central Australia and the Chamber of Commerce.

NEWS: When you say working with government, what do you mean?

NEWS: Did the council agree with the NT Government’s decision to extend the current term by 18 months, making the date of the next council election August 2017?

RYAN: The council accepted the view that was put to us, namely that the NT Electoral Commission could not run in 2016 a Territory election and two local government ones, plus the census. The government set August 2017 as the date because a late wet season in the Top End prevented many voters from reaching the polling stations in 2012.

NEWS: Fracking turned into an issue in this by-election. Is the council likely to change its stance about a moratorium?

RYAN: There is no fracking in our municipality and we want to stay in the discussion if it happens outside it.

NEWS: What are the council’s major issues in the remainder of this term?

RYAN: Ensure that we have some facilities to work with our youth and stop the situations that have occurred repeatedly over summer. Continue the joint programs of council and Congress. Build a non-denominational chapel at the cemetery. Look at how the government spends money on flood mitigation and crossing of the Todd from Mt Johns Valley.

NEWS: The northern Mall is still not firing.

RYAN: We will continue to work with property owners to allow pop-up shops. We’re happy about new shops going into Alice Plaza.

NEWS: Are you asking the Plaza to open out into the Mall?

RYAN: Signage says there’s a new bakery going in there, which effectively does that. The pharmacy opens into the Mall. We’ll continue working with whatever shops are in that area. I’m very keen to get pop-up shops turn into main shops as a first priority. There have been some very good success stories with pop-up shops. I hope we can make this go further next year.