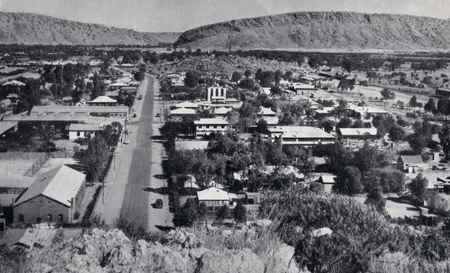 There has been some controversy about the decision not to proceed with a national standards athletics facility at Rhonda Diano Oval in the “North Side” of Alice Springs, compounded by a query in a letter as to who was Rhonda Diano?

This minor episode in local affairs raises some intriguing aspects about the Centre’s history; for example, there’s nothing new about proposals for athletics facilities for Alice Springs – there are precedents for every contemporary issue preoccupying public attention, of which most people are unaware and few are willing to acknowledge. However, it may pay to change our attitude towards local history.

There’s a varied history behind the naming of roads, parks, buildings and natural features in Alice Springs, how some names of dubious relevance have been chosen while others more noteworthy have been rejected.

In the early 1950s the Northern Territory Administration sought local submissions on the naming of streets in a new suburb, today known as the Old Eastside. There were two main schools of thought. As there were many war veterans in the Alice at the time and a significant number of blocks were reserved for them, one idea was to name the streets after significant battles and military identities.

The competing, and ultimately successful, proposal was to name the streets after significant early European explorers and settlers relevant to Central Australia.

This was strongly argued by local historians Adele Purvis and Doug Boerner, who criticised some names chosen for the town centre (such as Bath and Hartley streets, named after SA education officials, and Wills and Leichhardt terraces, named after explorers not directly connected to the Centre).

There have been some intriguing name suggestions over the years. In April 1963 Miss Olive Pink lobbied to have Gap Road renamed Van Senden Avenue, in honour of the former municipal officer under the NTA who implemented a major street tree planting program in the early 1950s, including the river gums that line Gap Road and the white cedars in Stuart Park.

Her suggestion was rejected but many years later Dudley Van Senden had a road named in his honour in the new suburb of Gillen.

Olive Pink also lobbied to have Nannygoat Hill renamed specifically Annie Meyers Hill, however it was officially renamed Meyers Hill in honour of both Annie and Charlie Meyers but today it is popularly known by the name preferred by Miss Pink.

Its counterpart, Billygoat Hill, steadfastly retains its name despite occasional strong criticism of it. These names seem absurd but historically they reflect a time before refrigeration when goats were vital for fresh meat and milk.

In 1964 Jimmy Bergengren suggested that Emily Gap Road (where he was living at the time) be renamed President Kennedy Road in honour of JFK who had been assassinated late the previous year – this idea was given serious consideration (it’s now Ragonesi Road).

In the mid 1970s Alice Springs was expanding to the north. The new CLP Member for Stuart, Roger Vale, chaired a public meeting seeking suggestions of names for the new suburb, primary school and parks that were extending beyond the Old Racecourse area.

The most popular name suggested for the suburb was Nelson Park, in honour of then NT Administrator Jock Nelson, previously the first mayor of Alice Springs and former long-serving Member for the Northern Territory; the next most popular choice was Greatorex, in honour of Tony Greatorex, the previous Member for Stuart and former President of the NT Legislative Council (and soon to be Alice Springs mayor).

The third choice was Braitling, in honour of local history stalwart Doreen Braitling who was the president of the National Trust of the NT and oversaw its upgrading as a statutory body and a full member of the National Council of Trusts. Her name was the most popular choice for the new primary school under construction.

The public meeting was held at Teppa Hill Preschool on 10/10/75. On November 11, 1975 the Whitlam Government was dismissed from office, and an outraged Jock Nelson resigned as Administrator to stand as the Labor candidate for the NT in the ensuing federal election campaign.

Nelson’s only defeat at the polls also appeared to cost him any chance of consideration of his name for the suburb that, along with the primary school, was ultimately named Braitling.

In 1983 the NT Legislative Assembly was increased from 19 to 25 seats, and one of the new seats in Alice Springs was named Braitling, of which Roger Vale became the first Member.

Various names had been suggested in 1975 for parks intended for the Braitling area but events were to take a different turn.

A popular and accomplished young sportswoman and mother, Rhonda Diano, was diagnosed with terminal cancer and died in March 1978.

There was an outpouring of grief at her untimely loss, and the new sports oval adjacent to the Braitling Primary School was eventually named after her.

The question implied in Maya Cifali’s letter “whoever Rhonda Diano was” (Centralian Advocate, September 22) could well serve as a catchphrase for local history.

Who was Rhonda Diano? What did she do, what happened to her, who remembers her, what is her significance? These are questions that can be answered at many levels but at their core lays the conundrum that is posed by history in general.

Why is history important, what is its relevance, what is or isn’t worthy of preservation and remembrance, can we reconcile differences of opinion and attitudes?

Alice Springs, and Mparntwe before it, is a meeting place and crossroads. The geography, its land and climate, dictates our history.

In the very short period of mainly European settlement in the Centre there has emerged an amazingly complex local history that is only selectively remembered, and much of it is quickly overlooked and forgotten.

We take our local history for granted without thinking much about it. The history of our history is no exception, for there has long been a “history war” over what is worthy of preservation that dates back to at least the 1950s.

The first popular parade to march in Todd Street, the Jubilee Parade of 1951 (celebrating 50 years of Federation), featured floats based on the theme of local history, commencing with traditional Aboriginal people.

There was a keen awareness of how quickly Alice Springs was changing – but that’s long forgotten even though the debate continues.

I feel history is analogous to the ecology of the natural environment around us, and might be defined as an ecology of human activity and relationships over time.

That has interesting implications as it suggests there is a science behind history, it’s not simply esoteric and incidental, rather there is an underlying mathematics to it to which few, if any of us, have any understanding.

I’ve noted for a long time there is an extraordinary degree of circularity on a range of topics in our town and the NT, often over a short duration of time, but generally we are blissfully unaware of it. We have a lot of debate and chatter but not much progress.

History is cyclical as well as a progression in time therefore the past truly is a key to the future but this notion is usually disregarded or rejected.

The danger of this approach has been commented upon by astute observers; in the First Century BC the Roman statesman and writer Marcus Tullius Cicero declared: “Those who have no knowledge of what has gone before them must forever remain children” – a sentiment famously echoed in 1905 by American philosopher George Santayana: “Those who cannot remember their past are condemned to repeat it”.

Nowhere is this more evident to me than in my own home town and territory.

Our understanding of that can help us avoid or limit the damage of mistakes we currently persist in making, and that means history is of practical and real value.

Alice Springs, due to its isolation, small population and short recorded period of existence, may be an ideal place to come to grips with the science underlying history, in much the same way the Centre has long been pivotal in developing an understanding of the science of ecology.

Understanding ecology is vital to ensuring the development of a sustainable economy, and likewise the same approach taken with history will help to achieve a sustainable society.

IMAGE: Alice Springs photographed by Bruce Downie, about 1950, and published in Australian Scene in 1952. By that time it was already outdated – the distinctive silo-style Vacuum Oil Company fuel storage tanks (centre of photo), erected during World War Two, were dismantled in early May 1951.