Men sought for stealing with violence 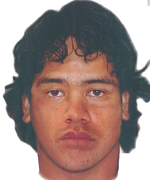 Police have released comfit images of two men they would like to speak to in relation to a stealing with violence in Gillen last week.

Detective Senior Sergeant Peter Dash said a 36-year-old man was riding home on his bicycle when he was approached by two unknown men at the intersection of  Pedler Avenue and Lewis Street at around 9pm.

“Police allege one of the offenders struck the victim to the face and stole his backpack, which contained camera equipment, before both men fled on foot,” Sgt Dash says.

“The first offender is described as being of Maori or Pacific Islander appearance, about 175cm tall, solid build and short hair. He was wearing a red rugby jumper with short sleeves, shorts and thongs.

“The second offender is described as being 175cm tall, with dark hair, skinny build and was wearing a dark t-shirt and a baseball cap.”