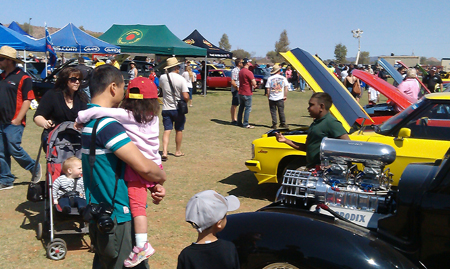 Alice Springs put beyond doubt that it is the capital of petrol heads when the Red CentreNATS got into top gear today.

There were close to 500 competitors – some 300 more than hoped for: “We thought 200 would be a great start to this event,” says media manager Mike Drewer. “The numbers we got are overwhelming.”

The 60% from the NT – including Alice Springs, of course – are supplemented from all over Australia, and even one from New Zealand, says Mr Drewer.

The event will now go for at least two more years, staged by the Summernats organisation in Canberra and the NT Government’s Major Events instrumentality.

Chief Minister Adam Giles, now presiding over a minority government, was a major promoter of the event, touted as the “ultimate festival of wheels in the heart of Australia”.

“The Red CentreNATS is proudly presented by the Northern Territory Government in association with the team from Australia’s favourite horsepower party, the Summernats,” says the pitch.

An estimated 1500 people were at Baltherskite Park this morning where the program unfolded with a show of street machines, elite cars, hobby vehicles, hot rods, classics, supercars, and a “show and shine”.

The event shifted to the drags venue in the afternoon for drag racing – entrants doing up to 170 miles an hours (note: not kilometers) over a quarter of a mile (no such a thing as kilometers in drag racing). This was followed by the official Burnout Masters Qualifier selection.

In case you don’t know what a burnout is: You do doughnuts spinning your back wheels until they burst. Extra points if they do it at the same time.

If you see this modest ute at an intersection, don’t say to the driver: “How about a drag?”

The fiery competition got a bit out of hand with this F100. 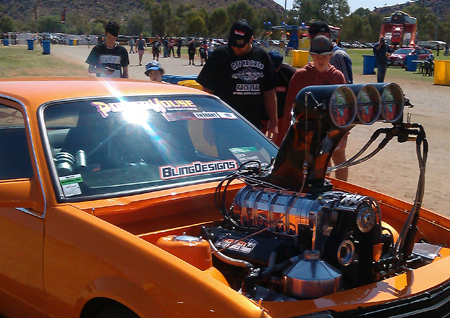 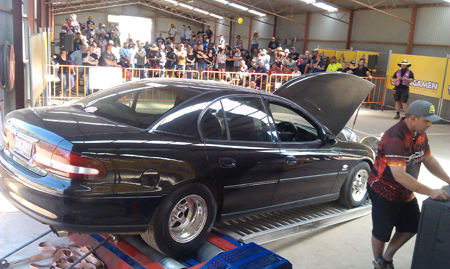 You spent hundreds of hours and OMG so many dollars on your machine: This morning you could find out what torque and KWs (horse power) it produces. 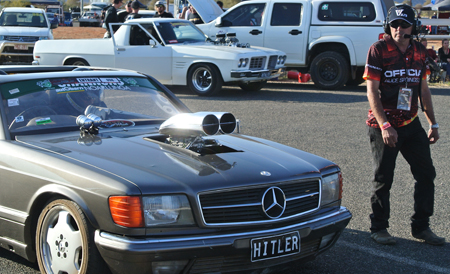 So this is where Adolf got to!

The grass at Blatherskite park will need a bit of TLC.

Green light at the drags. 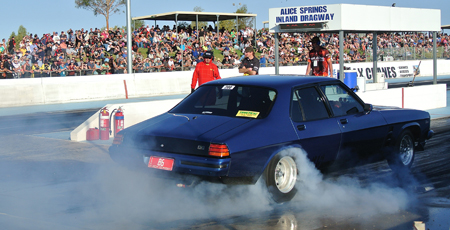 The crowd loved it.