Glowing caterpillars, lanterns and the signature sound of Drum Atweme drew a nice crowd to open the Alice Desert Festival with the parade down Todd Mall just after 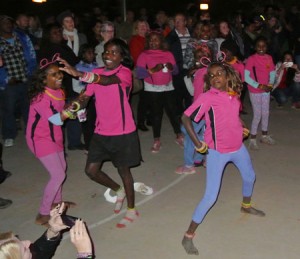 It had charm but also a sense of déjà vu. Maybe it’s time we expanded our repertoire when it comes to acknowledging the Arrernte stories of this place: caterpillars are not the only totems and they’ve dominated for more than a decade now! But still it set a good tone and the crowd followed the parade into the grounds of the Youth Centre where the festival has set up its base.

The venue’s outdoor area hosted the free concert but it lacked the comfort of the grassed oval next door and might have lost numbers due to this. A bit hard to spread the picnic rug and relax on concrete. A shame because Bunna Lawrie and Coloured Stone were great – their tunes, lyrics, rhythms and chat with the audience. Upbeat, relevant, funny and danceable.

My pick for Saturday was the local comedy showcase, although it was mostly not about local comic matters. The Territory government, for example, did not rate a mention. 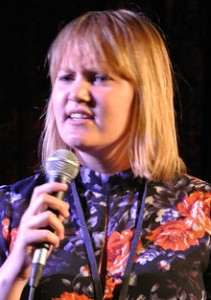 Most of the comedians were first-timers to the stage, fresh from a workshop led by Darwin’s Amy Hetherington (left). If they were nervous, they hid it well. They got up there in front of an audience of 90 or so and plunged in, delivering short, fairly tight stand-up around a central theme or situation.

Hetherington MCd for the night – funny, warm, cheeky and quick to bounce off input from the audience. She also drew laughs with commentary on the local scene: How did so many hipsters end up in the desert – did they get stranded after Tiger stopped flying from Melbourne? What was with the tropical décor for the festival’s Tiki bar when it was so cold she was wearing three pairs of tights? 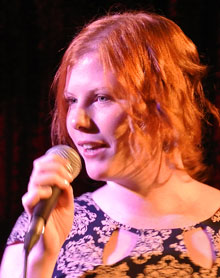 Hannah Grace (right) delivered the most depth on the local, working off the old Triple M joke about new arrivals, that they’re all Missionaries, Mercenaries or Misfits. She thought we needed more categories of ‘M’: Moving here to work for the Territory government; the Murray and Maureen factor (grey nomads who can’t find their way back); the Massive Mess (polite word) in your social life elsewhere. She went on to tell the funny, whimsical story that puts her arrival in the last category, and along the way getting in a few digs about the local mentality: the idea that we’re tough (not) because we live “in the desert”; that the only category of ‘elsewhere’ is “down 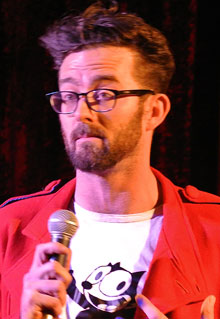 Felix Myer (left) also had a lot to say about Alice but he drowned it in a sought-after shock factor, with florid jokes about cancer and his hipster version of the classic male response to strong women. He had a good joke though about being “a racist sexist”: “I hate stupid white men.”

Is local material essential? Certainly not exclusively, but audiences love it if it rings bells, and it has the advantage of  uniqueness. As well, laughter about the local is a great antidote to the weeping and gnashing of teeth that is often the alternative. 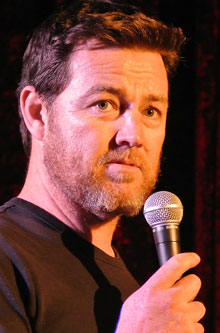 Everyone who got up drew laughs, so well done to them and hopefully they’ll keep going. But for me, apart from more local material, a starting point for going forward would be less reliance on bodily functions of the daily kind,  which dominated the set of school teacher Chris Cook (right),  and on the old f-word – the professionals use it, I know, and amazingly enough people do laugh, but how funny is it? And do we live in one of the most distinctive parts of Australia to do what everyone else does?