A geography of ideas 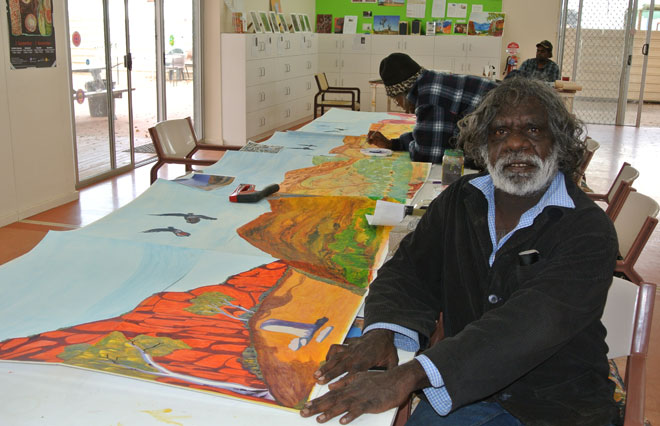 After their innovative and delightful circle skirt project, Ngurratjuta Many Hands Artists are working on a collaborative panoramic landscape, showing the MacDonnell Ranges – from west to east, Tjoritja to Yeperenye. Both the skirts and the collaborative will be on show as part of Tarnanthi, the Art Gallery of South Australia’s inaugural Festival of Contemporary Aboriginal and Torres Strait Islander Art.

Tarnanthi will celebrate Aboriginal art “on a scale that has never been seen before in South Australia”, according to the AGSA. In the festival’s  “comprehensive geography of ideas” artists from The Centre will be well represented. Tangentyere Artists have recently sent south a whole new generation of Selfies (others will go on show at their gallery here in town, opening this Friday, 4 September at 6pm). There’ll be sculptural work from Yarrenyty Arltere, based at Larapinta Valley town camp; new moving image work by Warwick Thorton; wooden sculpture and paintings on a bush footy theme by Dinni Kunoth Kemarre and Josie Kunoth Petyarre, a husband and wife ‘team’ from Utopia, to name but a few. 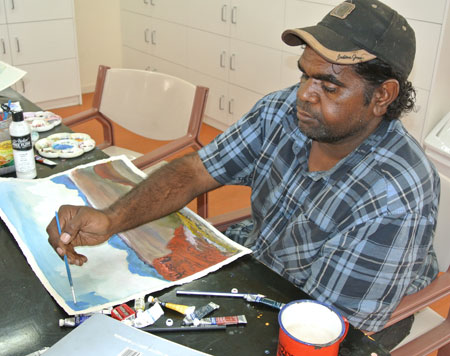 The collaborative landscape by the Ngurratjuta artists takes the risk of combining their different styles across the panorama. Mervyn Rubuntja’s is particularly distinct from the rest, with his choice of bright colour applied in large flat, clearly outlined areas. But stylistics are not what he wants to talk about in his depiction of Emily Gap – Anthwerrke in Arrernte. It’s story, of course, the caterpillar journeys and battles.

He describes the caterpillar men from Mbantua lying down, relaxing – he stretches, rubs his stomach – on the land where the golf course is now. Then they heard “someone with a different language coming” – he cups his hand to his ear. The local caterpillar men woke each other up: “There’s some strangers coming to our country.” The strangers were Anmatjere mob, from the north-west; Central Arrernte have “a different voice”.

The Anmatjere mob had spears, and the two groups had a fight. This happened on the small hill opposite the hospital. The Arrernte mob “chopped the tails” of the Anmatjere. After that the local caterpillars travelled through a cave – “You go to the casino and have a look” – and from there to Emily Gap, where the story is the subject of cave paintings, and beyond.

Mervyn names a plain to the east where the caterpillars went down into the ground and formed into moths – his hands flutter like moth wings. This is out near Ross River: “There are so many holes there, today … very big, like one person dropped a bomb, that wide, big and small, so many, still there today.”

This story was passed down the generations, from Mervyn’s father’s father, to his father, to him. His father, the late W. Rubuntja, painted a marvellous version of the Emily Gap cave painting that is housed at MAGNT in Darwin. It’s the same story, Mervyn says, as the one his father also represented in his design for the main stained glass window at Araluen, even though the motifs are very different. 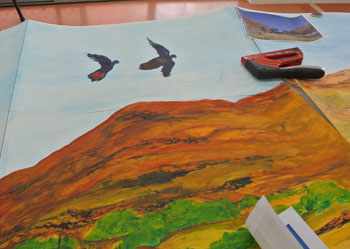 Mervyn’s view of Emily Gap shows the large rock that rises in the middle of the creek bed. It has a story too but it’s not one that can be shared: “It’s sacred, you know.”

Next to Mervyn’s section of the panorama is Rienhold Inkamala’s, whose style is loose and painterly. He also did the lively birds “flying around” (detail at left) in the sky of his and other sections. When I visit he has finished his work on the panorama and returned to painting on a smaller scale his country to the west – where “a big woman” is lying down, “sleeping”. It’s the place known in English as Mount Sonder.

Gloria Pannka and Lenie Namatjira are still working on their adjoining sections, Heavitree Gap and Mount Gillen – Ntaripe and Alhekulyele in Arrernte. Although these landscapes are heavily impinged upon by the modern town the artists show them as untouched. No roads, railway line, telecom towers, buildings.

“I can picture it, how it used to be,” says Gloria.

They both speak of enjoying working together on the panorama – “sharing what we are doing,” says Lenie, whose “cousin-brother, Kevin Namatjira” is doing the final section, showing country further to the west. 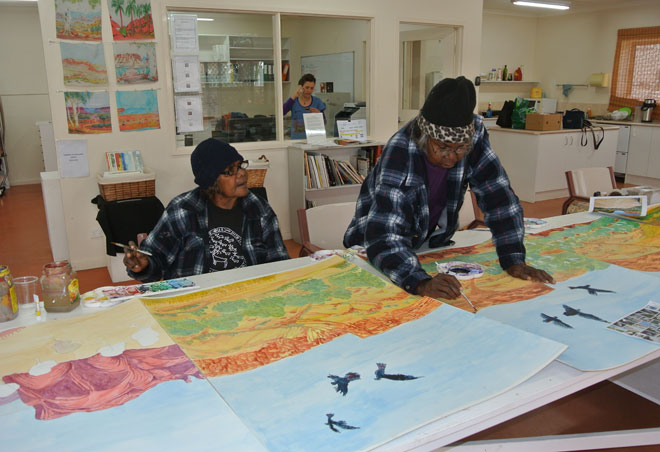 Lenie Namatjira (left) and Gloria Pannka at work on the panorama.

They also speak of their pleasure in being back in the remodelled Ngurratjuta studio, after a couple of nomadic years. One of the places where they were able to work during this time was the Batchelor campus at Desert Knowledge precinct. But it’s interesting to be reminded of the importance of being in the right country for many Aboriginal people. They were “uncomfortable” on the southern side and it was for more reason than “humbug” and “too many people”.

“We don’t feel like going through that gap, you know what I mean,” says Gloria. “We want to stay here.”

“We grew up in this area,” both women say.

Five of the Ngurratjuta artists have been invited to the opening of Tarnanthi in Adelaide on 8 October: Hubert Pareroultja (who worked on the skirts project), as well as Mervyn, Gloria, Lenie and Kevin. From Adelaide Gloria and Lenie will travel on to Canberra to take part in The Rights of Culture event organised by Creating Australia, an organisation promoting community arts and cultural development. The two artists will then spend a week in the School of Art, at the Australian National University, in a teaching and learning exchange.

In the meantime, Alice Springs gets its own celebration of contemporary Aboriginal art, with Desert Mob opening at Araluen this Thursday evening. Apart from Tangentyere’s Selfies #2, Ikuntji Artists are also having a satellite show, Ancestral Presence, at Central Craft’s June Marriott Gallery, not to mention the offerings of Raft Artspace, Talapi and Papunya Tula Artists, and the art pop-ups in the mall, showing the Desart Art Workers photography prize (in Reg Harris Lane) and work by the Tjanpi Desert Weavers (next door to ex-Don Thomas).