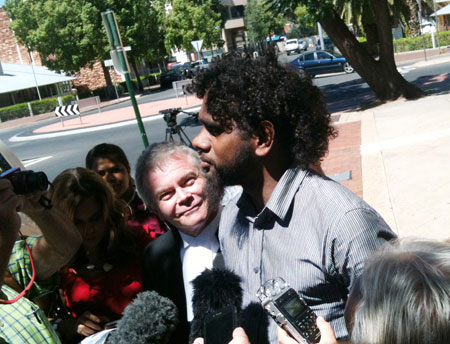 “I’m sick and tired of Mr Jurrah!” said an irate Magistrate Daynor Trigg before sending the name of the famous footballer to the bottom of the list of matters he’d deal with this morning.

Right: Liam Jurrah in better days, after his 2013 ‘not guilty’ verdict. Jon Tippet QC by his side.

Liam Jurrah was hoping to again apply for bail after it was denied him last Friday in the Supreme Court.

His lawyer, Shawanah Tasneem from Aboriginal Legal Aid, would not act for him on the bail application but was representing him on the substantive matters, two charges of aggravated assault and two of contravention of a domestic violence order, for which he is being held on remand. The hearing of these matters was set to go ahead on Monday in Hermannsburg.

Mr Jurrah wanted to represent himself for the bail application. Yesterday, Magistrate Sarah McNamara accepted that without comment.

This morning, when he was brought up from the cells, Magistrate Trigg told him with impatience that the application had no merit, as the hearing would be on Monday.

Ms Tasneem asked Magistrate Trigg to nonetheless deal with the application so that she could then address him on the files for the substantive matters.

Magistrate Trigg said he would give him “ten seconds” but it was “a waste of time!” And in any case he would have to wait, as lawyers are given preference on the list, people who are self-represented come last.

Mr Jurrah was standing and attempted to open his mouth. Magistrate Trigg again told him that it was a waste of time: “Now, sit down!”

He’s not getting bail, he told Ms Tasneem, he went to the Supreme Court and was refused, and he was not going to go behind a Supreme Court judge and give him bail.

Ms Tasneem wanted him to at least allow Mr Jurrah to make the application “as a matter of procedural fairness”.

Drawing a breath, Ms Tasneem attempted to address the substantive matters, seeking to vacate Monday’s hearing date on the basis that the matters would proceed by way of plea. Magistrate Trigg interrupted and she said with some exasperation, “If I may finish”.

That was it! Matter stood down: “I’m not going to take rudeness from you!” And out he went.

Mr Jurrah was taken back down to the cells and the court was adjourned. That was his bail application: not a word said.

Ten or so minutes later, after a quiet suggestion from Crown prosecutor Isabella Maxwell-Williams to the court orderlies, Mr Jurrah’s file, with Magistrate Trigg’s assent, was sent across to Magistrate John Birch.

Magistrate Birch told Mr Jurrah that his applications had been refused by Justice Hiley and again by Magistrate Trigg and that he had exhausted his right to apply.

His guilty pleas to the substantive matters will now be heard in Alice Springs next Tuesday, 1 September.