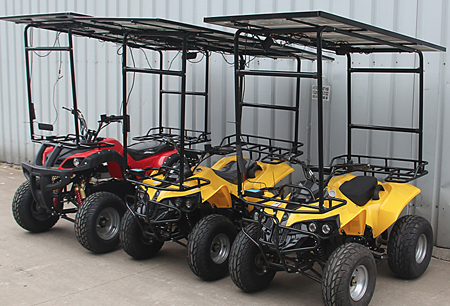 A bid to cross Australia from east to west on solar powered quad bikes had to be scrapped, at least for this year, because customs are delaying a decision about whether or not to allow the importing of the vehicles.

Hans Tholstrup, the founder 30 years ago of the World Solar challenge between Darwin, Alice Springs and Adelaide, says it will take up to 60 days to get a “yes” or a “no” about the granting of an import license for the three bikes already shipped.

The run cannot take place during the hottest time of the year.

“Write off the exercise, don’t do any testing and don’t look for answers for life after oil is the message I am getting from Canberra,” says the renewable energy campaigner and well-known adventurer.

He attempted to convert a Honda quad, could not find any suitable Australian-made electric motors, but found a ready supply in China.

The trip is planned for along the Outback Way, now being progressively sealed, from Queensland to WA via Alice Springs.

Mr Tholstrup says the solar races surprised the world, seeing cars going “from Darwin to Adelaide on just sunshine, averaging over 100 km/h, proving that human kind can face its future if allowed to excel at doing what needs to be done.

“I never dreamed that a quad bike would be a vehicle that would need an import license.

“Why have we allowed our great country to come to this?

“New Zealand is looking good is all I can say. Australia is no longer the country I came to in 1964, fleeing the nanny state of Denmark, which now has fewer regulations than Australia.”