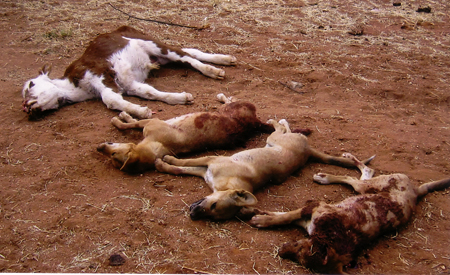 A pastoralist says he has shot or baited about 1000 feral dogs in the past five years on his family’s cattle station, Mount Riddock, north-east of Alice Springs.

Dick Cadzow says packs of dogs, some of them dingo cross-breeds, have decimated the area’s kangaroo population and are killing other native fauna and young cattle.

“Kangaroos were everywhere five years ago,” says Mr Cadzow, “but there’s none today, virtually nil. And if there was a pure-bred dingo around, the feral dogs would clean him up, too.”

Although the NT Government has been made aware of the problem, including raising the issue at last year’s AGM of the NT Cattlemen’s Association (NTCA), nothing of note has been done.

Primary Production Minister Willem Westra van Holthe has requested a report from the NTCA which formed a committee that had its second meeting last week, and is due to report at the end of this month.

A government spokeswoman says the “the Parks and Wildlife Commission NT has not received any reports on this matter”.

Mr Cadzow says the feral dogs come from north-east to north-west: “We don’t get any from the west nor the south. They are migrating south. If we get a strong south-east wind in the next few days we’ll have a line of dogs coming.”

He has been keeping records for five and a half years. Just 40 were killed on the station in the first year, but the dogs “bred up” sharply and the damage to stock and wildlife became acute.

Mr Cadzow says the dog problem is a national issue: “Queensland is putting in dog fences at a huge cost. I have a brother in Charleville, they’ve just finished a fence.  The dog fence in SA in disrepair.”

PHOTO: A killed calf and shot dogs at Mount Riddock.

Minister van Holte provided the following statement: “At the request of the NT Cattlemen’s Association a new system of permits for using 1080 to control wild dogs was introduced in 2012. This involved a number of changes to streamline the system including setting up Regional Wild Dog Management Groups. Members of these groups are trained and authorised to prepare wet meat baits, with baiting coordinated between neighbouring properties.

“At the end of last year there were 24 Regional Wild Dog Management Groups and the number of pastoral stations participating exceeded 100 – more than half of the industry.

“Wild dog control is a difficult problem and one that was largely ignored by the previous Labor Government. It wasn’t until late 2012, when the Country Liberals came to power, that action was finally taken on this matter.

“But we know there is still more to be done. That’s why we’re working closely with the NT Wild Dog Management Committee, which had its first meeting late last year. This group will work in partnership with the industry to monitor and improve wild dog control by the pastoral industry through extension and education.

“My Department has also initiated a review of the 1080 authorisation system associated with wild dog management. I believe by working together, we will come to a mutually beneficial and positive arrangement.”