Waste not: the art of reinvention 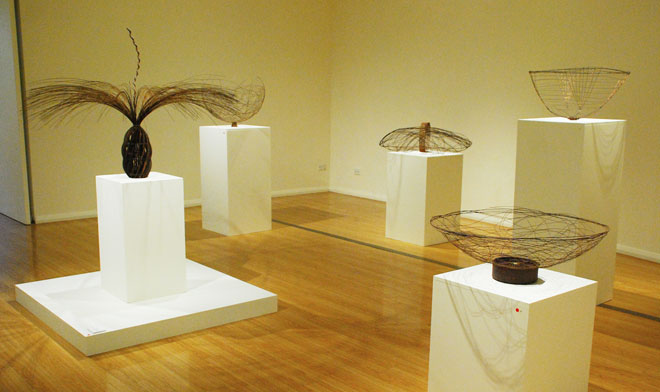 If ‘aftermath’ usually refers to what remains from a preceding disaster, in the case of Faye Alexander and her work the word as exhibition title hails the transformation of waste in a process of discovery, reinvention, reinterpretation.

A ceramist by training and long practice, in recent years Alexander has turned away from the energy consuming craft, where her delight was in making beautiful objects for everyday use, and stepped towards sculptural art and zero emissions. 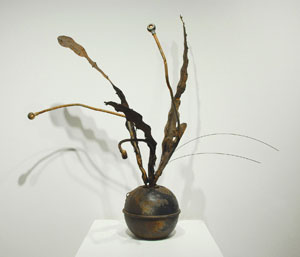 The only energy expended is her own. She is perennially on the lookout for materials as she goes about her daily life and travels, then meditates on what she has found until its expressive potential is revealed.

Thus the fibre-like quality of wire has suggested its possibilities for inter-weaving. Basket-like objects have emerged (see image at top). Not baskets for purpose, but baskets as form. And not form alone, as the shadows they cast are as much part of what these pieces offer as the objects themselves.

This impression of revelation is not to under-estimate the painstaking labour involved as Alexander has coaxed her resistant materials into place. There is no welding, and in the whole exhibition only two instances of gluing.

Other massed produced metal objects, cast off from past and sometimes mysterious uses, have suggested plant-like forms. In Hybrid (at left in image at top) some kind of toothed blades have been assembled in a form reminiscent of a desert oak seed pod. In scale it is like a vase. Spilling from it, stems of grass-like wire, and twisting up from the middle a thick stem that conjures the form of the grasstree (Xanthorrhoea). This association then transforms the vase phantom to trunk. 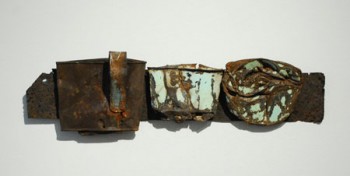 The work is best when it stays on the ambiguous side of what is expressively suggested, when there’s a delicate play between the nature of the material and the way it has been reinterpreted. Although it attracts the eye, Ikebana (above left) may be too unambiguously a floral arrangement, too directly imitative. Nonetheless, it is intriguing to discern the origin of the materials – the metal corners from tea-chests, for example, as the long leaves in this piece.

Some pieces, such as the Pannikin series (Whose pannikin?, above right), are more simply in homage to the inherent interest and beauty of found objects and the way time and the elements have worked on them. Alexander’s well-judged intervention here has been to assemble them in such a way as to draw contemplation.

Aftermath shows until August 16 at the Araluen Arts Centre. Images of installation and art, courtesy Araluen. Below: Faye Alexander at work, photograph by Tara Leckey. 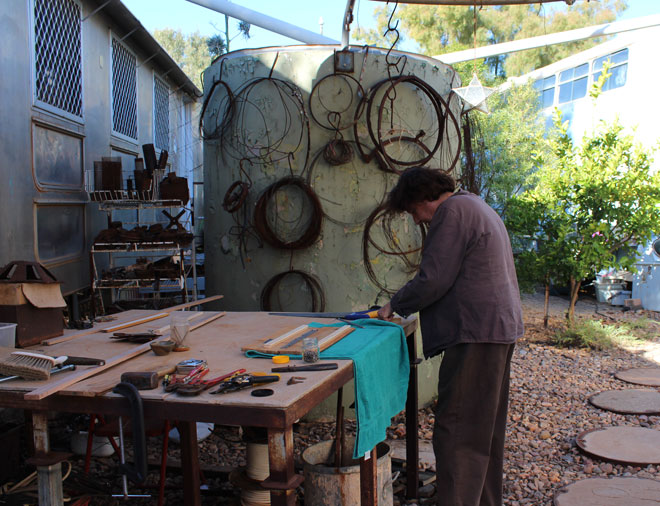