“The land’s there for everyone,” the artist Mervyn Rubuntja told the audience gathered for the opening of a new exhibition at Watch This Space. “We share the land.” 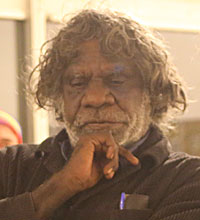 He and his fellow artists, family members in a group show at Watch This Space, share the land through their art, but Rubuntja (right) was also extending generosity to non-Aboriginal painters who are drawn, like him, to painting The Centre’s landscapes.

He paints in watercolour, in the tradition of Albert Namatjira, but with his own robust drawing style and colour sense.

He visited China last year, on an artists’ exchange through Desart: way too many people and too little space for him, and everything seen through a haze of pollution. He came back more certain than ever of how he paints, of the strong clear colour he uses: the way he sees the landscape in unpolluted light.

He holds the images in his head; memory sheds what is not relevant. For instance in the view from his home, in Larapinta Valley town camp, towards Honeymoon Gap (below) there is no intrusion of the man-made. It’s a representation rather of an ideal of what has always been and will remain.

Other artists in the show use the dot painting style. Rubuntja wanted the show to embrace the two styles, following in the footsteps of his father, the late W. Rubuntja, who used both.

A particular attraction in this show is seeing several works by each artist. Individual vision or talent can often be overlooked in the context of large group exhibitions where each artist may only be represented by one work. Thus I became aware for the first time the work of Frieda Ross (Untitled, below left), appreciating it for its fine detail and muted palette. Also showing are Noel Ross, Janie Nelson and Kay Rubuntja. 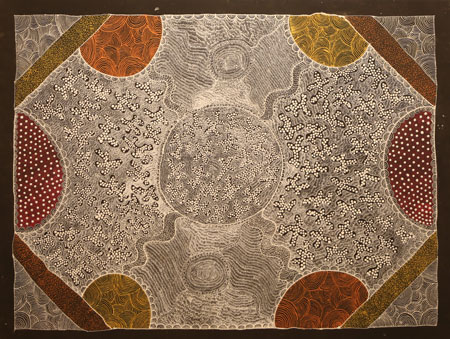 For Watch This Space, an artist-run initiative, this might be the first, or at most is one of very few shows devoted to Aboriginal artists. This reflects the local culture around exhibiting Aboriginal art, where responsibility is taken by others, whether art centres, private gallerists, or the public galleries at Araluen. On this occasion Rubuntja wanted to be in charge – “to start doing it for ourselves”. He’s giving it a try and then will see “how it’s going to work, doing our own business”.

The benefit will hopefully cut both ways: for the artists themselves, in terms of self-empowerment, confidence-building and sales; and for the local arts culture, a step across what has become an entrenched division in the way art is taken to audiences.