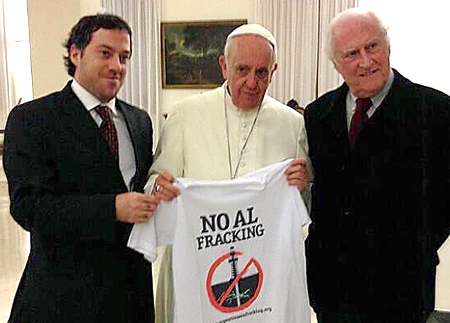 Sir – Fracking is too risky. The short term social, economic and political benefits of fracking such as investment, jobs and a stronger economy are outweighed by the negative impacts and potential long term risks to our families and communities.

Why risk our future health, environment and finances when there are renewable energy options that create jobs, cheaper power and a safer, healthier future for all Central Australians.

Our concerns about fracking are shared by many people, organisations and leaders in similar situations including Pope Francis (pictured).

Eight European countries have banned fracking (including Germany who now lead the world in solar energy usage with Australian researchers), and 50 local councils across Australia including Katherine in the Northern Territory.

Unfortunately many government, business and media reports, including the 2014 NT Fracking Report by Allan Hawke, focus on the short term self-interest benefits and minimise or ignore the negative impacts and serious risks to our community and environment.

While acknowledging that there are risks, the Hawke Report misleads us into expecting that the government can regulate away these “low” risks.

The current regulatory framework for fracking the NT is very weak, especially around protecting our water. Yet fracking approvals have been given.

Where fracking has occurred around the world, regulation has been ineffective and insufficient to protect people’s health and safety.

Company payouts for a family with nose bleeds, nausea and sicknesses and a complete town having to bring in water are evidence of the social and health impacts of fracking.

Fracking risks contaminating our primary water source. Unlike most of the world that stores rainfall, Central Australia is heavily dependent on underground water for ourselves, our animals, our food, our farms, our land and future generations.

Millions of litres of precious water and thousands of litres of chemicals are used in every frack. 20% of all chemicals stay underground. The rest goes into holding ponds.

Some have leaked. Some of the 600 chemicals known to be used are carcinogenic and “a few present concerns of extreme toxicity” (NT Government Hawke Report).

Fracking regulation may minimise, but does not remove, many of the risks to our future health and safety. Many regulations risk being weak, meaningless, unenforceable or not enforced in practice.

There is a risk that compliance and monitoring will be limited because of the expense of covering large inhospitable areas.

There is a risk of companies using “commercial in confidence” arguments to prevent full public scrutiny and assessment of all chemicals pumped underground for fracking.

There is a risk of companies, contractors or workers taking shortcuts, covering up spillages and leaks, and avoiding accountability, especially in remote areas.

There is a risk that any contamination will not be able to be sufficiently measured or attributed to those who did the fracking or have benefited from it.

There is a risk of contamination claims being tied up for years of legal wrangling about who is responsible for it and who pays.

There is a risk of future governments being left to use future taxpayer’s money to deal with the economic, social and health consequences of contamination.

There is a risk that underground contamination of water may never be able to be decontaminated.

Not only is prevention better than cure, prevention may be the only cure. We need to practice the precautionary principle.

There is a risk that remote Aboriginal communities have given consent or may be asked to give consent without being fully informed of the impact and risks of fracking on them and future generations in their local area and across our world.

The remote Aboriginal community of Santa Teresa was established because the gold mine water from Arltunga mission was making people sick.

There is a risk that many people especially health, education, welfare and business professionals who are deeply concerned about fracking, feel unable to speak because they are in government funded jobs or benefit from government contracts.

There is a risk that fracking and burning this fossil fuel gas here in Australia and overseas will increase climate change impacts on Alice Springs and our world.

Money spent on building a gas pipeline to the Eastern States could provide free solar power for 500 homes in Central Australia. Mining company skills could build a geothermal power station to provide renewable energy for homes businesses and electric cars for years to come.