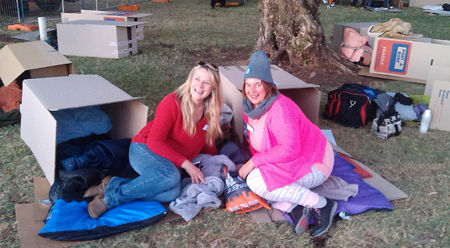 All was fine for a while. Jill’s husband was the bread winner and she was running the household, looking after their two kids.

That was until three years ago when the marriage “turned nasty”.

A bad choice of a new partner brought more of the same, no worse: his booze and drugs habits caused even greater misery.

At three o’clock one morning the police knocked on her door, taking Jill (not her real name) and her kids to safety.

A police officer did all he could, including taking care of the dog. Then: “We even had to give him up.”

The officer gave Jill a list of phone numbers and a phone, but then other police business took priority that morning, and Jill was on her own, more so than she could ever have imagined.

Welfare services brushed her off because she had no ID. She had lost her cards “somewhere in a paddock” during a violent encounter with her partner.

“The world is passing us by. I just don’t exist.”

An odyssey of homelessness ensued for the three.

They slept on the kitchen floor in her parents’ tiny flat.

That was followed by three months in a refuge. 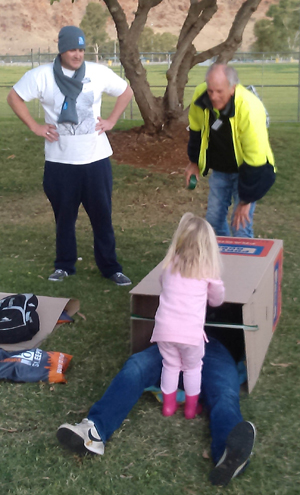 Where do you go when you don’t want to be found?

To the Northern Territory, of course.

Now the audience could laugh – some 60 people gathered at the show grounds last night on a cold night soon to get a lot colder for them.

Together with Kate, Jill was a guest speaker at the annual CEO Sleepout, with CAAMA’s Mikaela Simpson a warm and compassionate MC.

The evening and the fundraising (still continuing) was organised by the St Vincent de Paul Society as a nation-wide initiative.

And to show that these members of the local business community meant business, they slept out in near freezing temperature, bringing just pillows and a sleeping bags, and sheltered in cardboard boxes.

Counting also people in overcrowded housing, one in 17 Territorians is homeless: that’s how many of them spend every night.

Alice not only raised more money than Darwin, we did it harder: The night-time temperature up there was 22 degrees.

Charity in Alice goes hand-in-hand with a fair bit of gusto. The auction, conducted most assertively by Dominic Miller, is an example.

How much for sleeping in your own car tonight? $100.

The king of the individual fundraisers was Chifley manager Jeff Huyben who was sponsored by a string of people for rowing certain distances.

As water is hard to come by in Alice he set up his rowing machine in the motel’s driveway, which means guests also chipped in.

And so the odyssey of homelessness for Jill and her children ended in Alice Springs, with a community that cares. 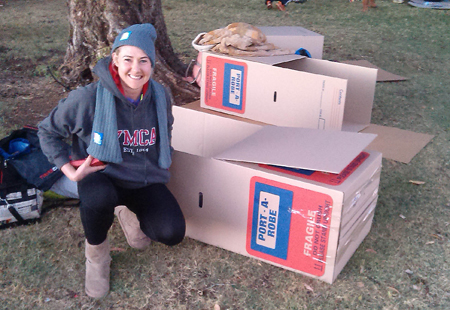 She first got a job in King’s Canyon, then moved to Alice to work in a real estate firm.

Significantly, meaningful help came not so much from government agencies but from NGOs like Vinnnies and Mission Australia – and from locals.

For example, colleagues make sure that clients’ unwanted furniture finishes up in Jill’s new home.

As someone who has suffered “bigger blows than others” she says: “When you see a homeless person, say ‘hi’.

“But it’s no good getting angry.

“The world won’t stop for you.

“Feel blessed to have good people around you.”

Full and frank admission: The writer slept not cardboard box but in a swag to be in top condition for compiling this story.

PHOTOS (from top): Jenni Lillis and Liz Davies getting settled in for a cold night • Matt Strawbridge and Brian Blakeman supervising Andrew Dayman getting comfy while his daughter Scarlett is wondering what’s going on • Jess Karlsson and her home away from home.