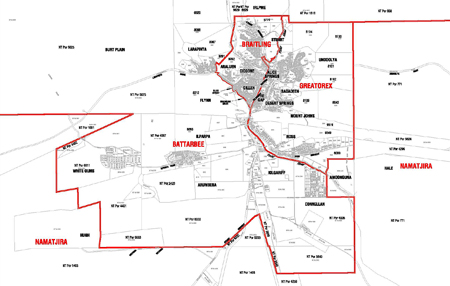 MLA for Araluen Robyn Lambley says “scrapping” a seat in Central Australia would be “failing Territorians” and be contrary to the CLP’s pledge to give a voice to the people in the bush.

The Redistribution Committee this morning announced its proposal to remove Araluen and add its area to Stuart, held by Bess Price (CLP), together with some of Braitling, held by Chief Minister Adam Giles, to form a new seat called Battarbee.

The would make Braitling and Greatorex the only urban seats in Alice Springs, with Greatorex, held by Matt Conlan (CLP), who has announced he won’t be standing again, moving its boundary west to include the CBD.

There is little proposed change to the southern-most seat, Namatjira, held by Alison Anderson, currently an Independent but noted for her frequent change in political affiliations. Her seat remains predominantly Aboriginal.

Ms Lambley, speaking after the announcement, said “there are a million ways to reconfigure boundaries”.

Araluen had been a “long standing CLP seat” for 32 years, with Jim Robertson, Eric Poole and Jodeen Carney as former Members.

She claimed the change would be the “thin end of the wedge” leading to a “vast majority of seats” in the Darwin area.

In other states “which do not have the quota system we have” the size of an electorate is taken into account, she says. 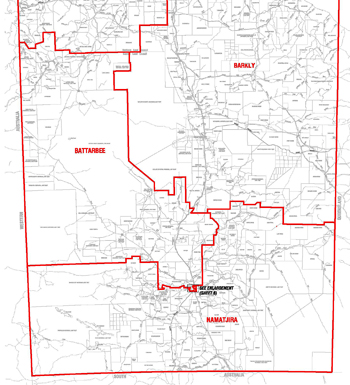 In the NT the numbers of electors and “community of interest” are major considerations.

Better representation in the bush was a major plank in the CLP’s 2012 election platform, said Ms Lambley. She would not say whether she will stay in the CLP, nor what her political ambitions are beyond serving out her term.

Phil Walcott, who has previously stood for Greatorex as an Independent, will do so again, he said this morning.

The changes are considered necessary because of the population growth in the north, Electoral Commissioner and chairman of the committee, Iain Loganathan, said.

The proposed redistribution in the north has resulted in one extra seat there.

Mr Loganathan said the projected growth in Alice Springs at 2.2% is much lower than the NT’s average of 3.3%. Palmerston is 6.6%.

Objections to the redistribution proposal can be lodged by July 16.