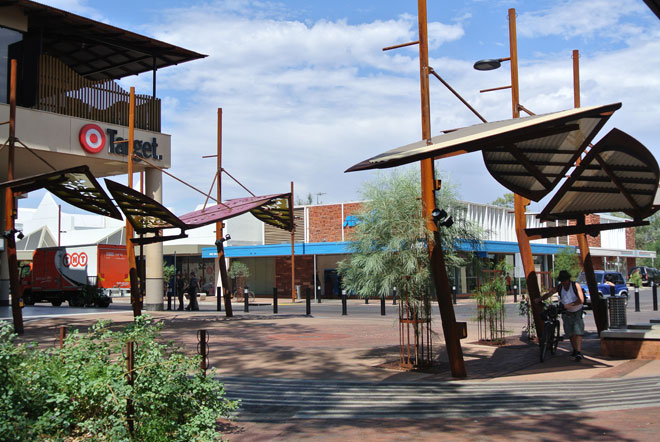 Above: The moth shade structures, a signature part of Susan Dugdale and Associates’ revitalising design for Parsons Street and Todd  Street North. Photo from our archive. Below right: Pip McManus’ public art intervention on a set of the shade structures. Photo supplied by McManus. 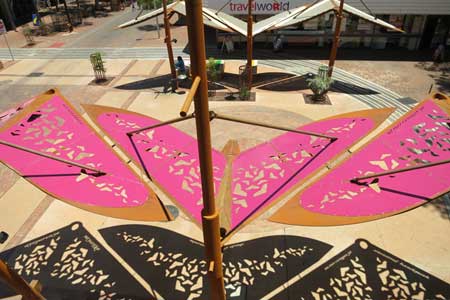 The project took the top honour, the Tracy Memorial Award, as well as the George Goyder Award for Urban Design and the COLORBOND Award for Steel Architecture.

The company previously won the Tracy Memorial Award in 2013 for the Green Well Building on Bath Street.

This year’s jury highlighted “local community benefits, environmental response and cultural aspects” of the CBD project. It had “successfully incorporated the environmental and indigenous heritage of the community, reduced the street clutter and provided a comfortable and colourful resting point for locals and visitors alike”.

The jury commended the Town Council and community for “initiating and supporting this project”, and the designers for “delivering this first stage which has the potential to increase public enjoyment, vibrancy and cultural engagement and positively shape the future of Alice.”

The Commercial Architecture award was for the new headquarters of Asbuild, on Smith Street. 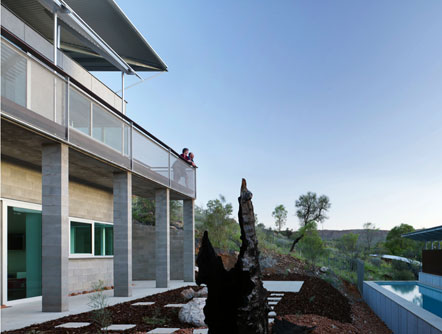 An Alice Springs residence (the Desert House, as pictured on the architects’ website), designed by a NSW company, Dunn and Hillam Architects, won the award for Residential Architecture.

The multi-purpose hall at the Alice Springs Youth and Community Centre won a commendation in the Public Architecture category for Tangentyere Design.

Meanwhile, the Town Council’s Director of Technical Services Greg Buxton voiced his pleasure in the awards for the CBD project at last night’s meeting, but it has not been a straightforward case of ‘build it and they will come’. One significant barrier to vitality remains with the inward facing Alice Plaza, not assisted by vacant tenancies.

There was no comment, in the open section of the meeting at least, about the potential impact on the mall of the announced ‘vision’ of the NT Government for a new commercial centre at the CBD’s edge, in Whittaker Street.

Councillors had before them an update on the Todd Mall Association, which has languished since the resignation of its energetic chair, Paul Darvodelsky, owner of the Alice Springs Cinemas. This may change if Deputy Mayor Kylie Bonanni takes over. She has expressed an interest in doing so, but at present is on six weeks’ personal leave from her council duties.

The association has $34,000 left in its promotions budget but the only taker is the council itself, allocating $1500 to the purchase of lights for the civic centre, $500 for the Christmas window display prize, and an estimated $8,700 for the creation of 38 banners. These will be installed on light poles up and down the mall. They will read ‘Welcome’ on one side and the Arrernte equivalent expression, ‘Werte’, on the other.

In a related matter councillors approved of the installation of three more moth shade structures in Todd Street North in front of the cinemas. The seat and bike racks there will be relocated.