… but it should not be necessary

PHOTOS: Above – A rural block as its owners love it, with orange tailed cockatoos feasting on native flora. Below – The shed that’s got them all stirred up. 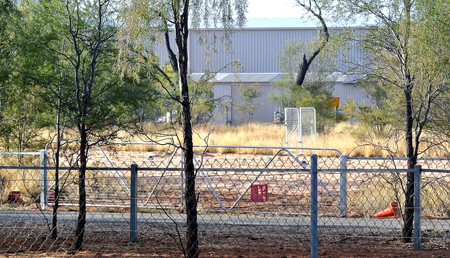 The Ruling Living zoning should be enough to protect rural residents: neighbour would not be pitted against neighbour if the zoning were meaningfully regulated and enforced.

So argued Angela Copland today when the application by her neighbours in Petrick Road, Connellan – to allow their plumbing business to be run from their rural block – was heard by the Development Consent Authority.

People formally commenting to the Development Consent Authority on the proposal were 37 to five against it.

Authority chairman Denis Burke, formerly a CLP Chief Minister in the NT, had already agreed that there were “issues with enforcement right across” the rural areas of the NT.

He asked the applicant, Lily Tan, to explain why the DCA should approve the application when it was “well outside” the requirements of the Planning Scheme and when she had “shown little regard” for the proper processes, such as the screening of the (already existing) shed, machinery and activities.

Screening along the northern boundary had been promised by 2012-13, but nothing has been done to date.

Mrs Tan said she and her husband, plumber Steven Zanca, have been working progressively over four years towards getting everything into place. Mr Zanca is often on jobs out bush, so work on the block falls to her. They have hired the services of architect Domenico Pecorari to help them meet the requirements of the Act. “Over four years we are getting there,” she said.

Mr Burke warned that if the DCA moves against the application, Mrs Tan would have to “shut it down in a heartbeat”. The decision would be enforced, he said. Doing their best “to get around to it” would not be accepted. He acknowledged the applicants’ “heavy investment” in their business but also acknowledged the effect it is having on their neighbours.

The Planning Department’s advice to the authority is to approve the application with conditions. Mr Burke’s stern words towards the end of the two-hour meeting thus came as something of a surprise.

Earlier in the meeting he had seemed to be trying to find grounds for a compromise. He asked Ross Copland what kind of Home Based Contracting (HBC) he would find acceptable.

The kind that is allowed by the Planning Scheme said Mr Copland, that is, confined to storage on 200sqm.

That is the area within the shed being proposed for the applicants’ HBC activity, Mr Burke said.

But it was never their intention to maintain a simple shed, said Mr Copland.

(The plans show an office, a recreation area, bedrooms, ablution facilities. Plumbing went in with the slab. Only the framework exists for the bedrooms at present.)

He had pointed out to the applicants that their shed (400sqm) is not properly certified. He had advice from Fire and Emergency Services that it needs to be reclassified.

The original shed was certified but there have since been modifications, said Mr Pecorari. “But that is something I imagine would be complied with.”

It won’t be simple, however. Authority member Steve Brown pointed out that an Independent Unit dwelling would have to be “isolated by a firewall”. The applicants’ plans do not seem to have allowed for that.

This came after Erwin Chlanda (editor of this site but speaking as a resident objecting to the application) raised the spectre of 1000sqm sheds going up all over the rural area, housing Independent Units. There is no limit on the floor area of a shed in the rural area, only on its height. Mr Burke agreed that the Scheme could do with more definitions (for example, on the size of sheds).

Mr Burke said he would “take advice” on Mr Chlanda’s other key point, which is that Home Occupation, which Mrs Tan and Mr Zanca are applying for, would not allow them to run their plumbing business from the block, yet that is what they are hoping to do with Home Based Contracting, which they are also applying for.

Mr Burke did venture that the activity of doing the books for a business is not actually ‘running’ the business.

If that is so, countered Mr Chlanda, then dozens of different industries that operate like plumbers do – builders, carpenters etc – could well start looking at the rural area as an attractive base for their contracting operations. The land is cheaper, the rates are cheaper – less than a quarter of those applicable in the town’s industrial areas.

Mr Burke pointed out that Home Based Contracting would not be allowed for in the Planning Scheme if some sort of activity were not anticipated.

Given that, enforcement is not simple, he said. It involves trying to get compatibility between different values and uses: pristine rural living, activities allowed under the Scheme, and historic uses some of which lie “way outside” of any scheme.

In this situation, it is not surprising perhaps that we are facing the possibility of “forgiveness” after the event rather than actual “permission”, as president of the Alice Springs Rural Area Association Rod Cramer pointed out. (Mr Cramer was urging more education of the public about what they are and are not allowed to do on their properties.)

But will allowing yet another development that falls “well outside” the requirements of the Planning Scheme (quoting Mr Burke) do anything other than compound the situation?

The DCA gets to decide and there is no appeal.


Declaration of interest: The reporter lives in Petrick Road and formally objected to the application.