In the bush, the Age of Entitlement meets the Asset Test 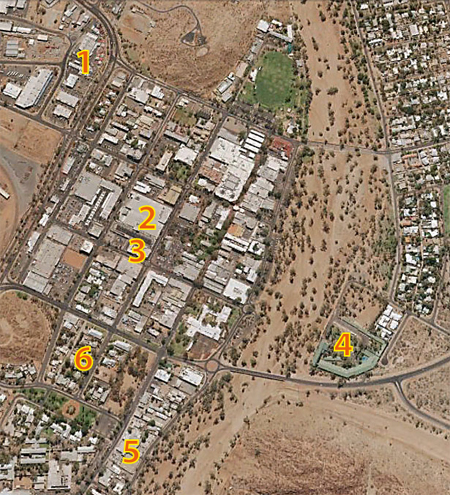 AT RIGHT: Aboriginal assets in Alice Springs, through “principal investments,” as declared by Centrecorp on its website, are the Peter Kittle Motor Company [1] which also has a major presence in South Australia; Yeperenye Shopping Centre [2]; L J Hooker [3]; Milner Road Foodtown [not shown]; Chifley Resort [4]; Memorial Club [5] property; and properties at 75 and 82 Hartley Street [6]. BELOW: Part of the Granites gold mine from which royalties flow to immensely wealthy groups associated with the Central Land Council.

Land ownership in the Territory, in round figures, looks like this: Aboriginal people make up one third of the population and own one million square kilometers.

The non-Aboriginal people make up two thirds of the population and own the other one million square kilometers.

That means per head of population, Aboriginal people own twice as much land as do non-Aboriginal.

This should ring a very large bell as public speculation and political utterances around the country about asset testing are reaching fever pitch. But the discussion in The Centre is only just getting under way.

The nation is grappling with questions like this: Why should you get to keep that million dollar home for which you’ve worked all your life and still get the pension?

Off you go, tootle down to your bank, take out a reverse mortgage, hope you die before it’s all gone. You leave nothing your kids.

Meanwhile, on the Aboriginal-owned million square kilometers, capable of being parceled out in 99-year leases, assets are sitting idle: Much of this land is viable cattle country; much has excellent ground water reserves where horticulture could blossom; there are a million camels in the deserts; the wide open spaces and zero pollution would make tourists’ heads spin with joy; and Aboriginal culture (just those bits that can be disclosed without compromising it) would make for a holiday experience completely unique in the world.

But there are no jobs out there, I hear you say. That’s correct. Why? Because all the things above would require work. Ah, that four-letter word.

That means the CLC is still the biggest shareholder but no longer has the majority.

Congress in fiscal 2014 had an operating income of $41.4m, mostly from government grants. Tangentyere will not disclose its financial details and Centrecorp is a Pty Ltd company which has minimal public disclosure obligations.

Explains Centrecorp on its website: “To comply with its enabling legislation, which precludes Central Land Council itself from undertaking commercial activities, whilst at the same time creating an entity with a robust ethic and sound corporate governance, Central Land Council joined with Central Australian Aboriginal Congress and Tangentyere Council as joint trustees of a charitable trust.”

Bess Price (at left), whose NT Electorate of Stuart is bigger than Germany and has a mostly Aboriginal population, has some robust views about commercial progress in the bush. But decisive action still is in the future.

The asset test promoters need look no further than into the Tanami desert, Minister Price’s patch, where two Aboriginal organisations are rolling in it: One, Kurra Aboriginal Corporation, is getting “royalty income from mining services” and “traditional owner distributions” and income from “investment properties”.

The Granites Mine Affected Areas Aboriginal Corporation in fiscal 2014 had total accumulated funds of $25.5m.

It is understood that both organisations rely on Centrecorp for its investment decisions.

I spoke with Ms Price who says: “I don’t have much to do with Centrecorp. I haven’t had dealings with them at all.”

NEWS: On the face of it, if Congress and Tangentyere would get together, they could roll the CLC and gain control over assets likely to be worth north of $100m. Why should any government fund organisations with access to such an asset base? Why don’t they use their own assets?

PRICE: I’d ask that question, too. Why don’t they? There is an opportunity for this money to go back to the communities from whose land the royalties come. It would help these communities hugely to create enterprises and jobs, and lift the living standards.

NEWS: How could you and the NT Government have an influence on such a process?

PRICE: We’ll have to have a conversation – the Commonwealth, us and Centrecorp, how best to use the funding that is available through Centrecorp.

NEWS: Has such a conversation taken place in the past?

PRICE: I don’t believe it has … but it could start small businesses in communities, bakeries, nurseries, some things from which communities could benefit and make a living.

NEWS: Is this something you would initiate? 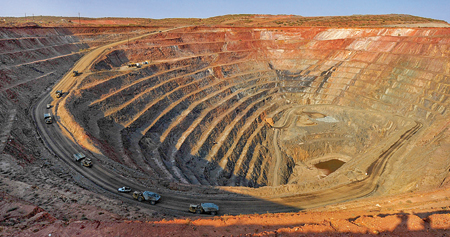 PRICE: I’d welcome it. I’d have to speak to my Chief Minister, of course.

NEWS: Asset tests are being discussed at the moment. Aboriginal people in the Territory have a lot of land. That could come into play. Add civic infrastructure on communities, public housing and the dole and the total of assets is substantial. Could they be marshaled into commercial development?

PRICE: Aboriginal people are land rich but the question is what to do with it. We yet haven’t been able to get to that stage. People are crying out for getting benefits from their land. It’s really up to the land councils. They should talk to the traditional owners about how we could develop the land. It’s not doing anything for us right now.

NEWS: Given that nothing significant has happened through the land councils, especially in The Centre, should the NT Government step in?

PRICE: This government is all about that. We want to create opportunities for the traditional owners to develop their land. But it’s up to the traditional owners to take that first step. They need to voice their opinions. There are some out there who want to go in that direction. They have ideas about enterprises and businesses, being creative on their land. They need to talk to the land councils, to make this dream they have come true.

NEWS: What especially are they aiming for?

PRICE: The Warlpiri want control over their lives and their country, a say as to what happens on it, whether it’s mining, economic development, have the power to do as they please on their country. They don’t have that power.

NEWS: What stops them?

PRICE: It’s the Landrights Act that prevents them from creating that opportunity for themselves.

Meanwhile to get a handle on the ins and outs of Centrecorp isn’t getting any easier.

Extensive coverage (google this site) in the Alice Springs News Online, in 2009 sparked a Senate inquiry further revealing some of the dealings.

Today Indigenous Affairs Minister Nigel Scullion, who is responsible for the CLC as a statutory body under his control, whilst usually being eminently accessible, is dodging questions about Centrecorp.

So are the other NT Senator, Nova Peris, the CLC, Tangentyere and Centrecorp itself. Congress says it’s still coming to grips with its role in the investment company. Its website doesn’t disclose much.

If its assets value is indeed around $100m then what it hands out to its (presumed) Aboriginal owners is paltry: The Centrecorp Foundation “is currently budgeted” to spend $1.5m a year. A well-managed portfolio worth $100m can be expected to turn off $10m a year.

Sources say Centrecorp – apart from Kittles – has substantial other interests interstate and in Alice Springs.

ERROR: In the initially published image at top right we misidentified the Chifley Resort. We thank the reader who pointed this out to us.