Uranium mining would help to save Alice: Businessmen 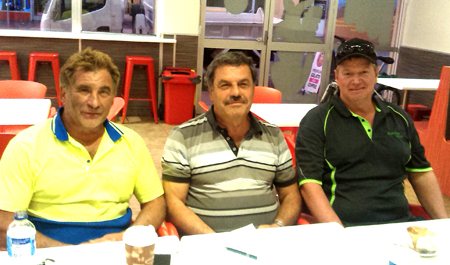 Uranium mining near Alice Springs, for which exploration was stopped by the Labor government before the 2012 election, needs to be back on the table.

This is the view of Tony Bandiera, Samih Habib-Bitar and Darren Burton (pictured from left), speaking for about 40 business operators, who are putting up a mix of ideas to drag the town out of its current slump.

They say opposition to a nuclear industry could be expected “from the usual quarters” but the group would be seeking assistance from the Charles Darwin University with opinion surveys to find out what the majority of the town thinks.

The group would then accept the verdict of the majority.

Other issues about which the group, which says it has no political affiliations, is seeking public feedback:–

• As the Ayers Rock Resort is not a town – you can’t go there and start a business without the resort’s consent, for example – the cost of providing all government services should be recouped in full from the resort’s interstate based owners, including power, water, sewerage, police, school, clinic, promotion and airport.

• Limiting the increase of Alice Springs Town Council rates for commercial land to the national Cost Price Index (CPI). Mr Burton says the Darwin CPI should not be applied because unlike Alice, that city is in boom conditions.

• There are reports that the NT Health Department is bartering for lower accommodation rents.

• Private caravan park operators are being undercut by Blatherskite Park (the show grounds) and the National Road Transport Hall of Fame – both operating from government owned land and hence enjoying unfair advantages. (The Alice Springs News Online has ask both for comment.)

• The “safe house” replacing Aranda House is not working. Delinquent kids are no longer confined – in fact if they misbehave further they are “kicked out”. Whilst there is a need for providing care for these children, and offering them recreation, they need to be able to be confined.

• Town parks should be put to better use. A park at Stirling Heights, for example, is grossly neglected.

• Mining approvals should be linked to requirements benefiting the town. Fly-in, fly-out arrangements to the mine sites should be curtailed. The Granites Mine, for example, provides little benefits for Alice – the FiFo bases are mostly interstate or in Darwin.

• Red Tape is being cut incrementally but there is still a long way to go.

• Linking the first home buyer’s grant to new dwellings does not serve well the town’s young people. It fails to keep them here. Other measures to stem the flight of the youngsters are also needed, such as better university education.

• Tourist promotion for the region is still failing to hit the mark.

The group is happy to name its members.

FOOTNOTE: During the interview the Alice Springs News Online put to the three members that cheap electricity from a nuclear plant here could be fueling Central Australia based manufacturing of solar energy hardware. That could, in time, produce power from the abundant sunshine of the region. Also, new low-loss direct current (DC) transmission equipment could put major cities within such a plant’s service area. The News gathered from the ensuing discussion that the three were supporting such a proposal. They have now explained that they favour discussion of putting mining uranium back on the agenda, but not nuclear power generation.