Thoughts on war and peace from a cyclist in Alice 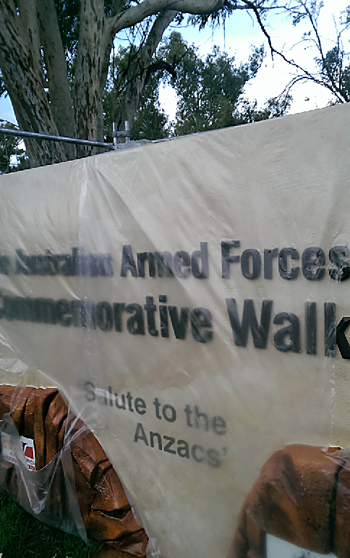 Sir – I’ve been cycling a lot lately, along the same route from Northside to Eastside or Northside to town and back again. I like the river route from Schwartz Crescent.

In recent months, I’ve taken note of the construction of the Australian Armed Forces Commemorative Walk. It’s alongside the Todd River path between the Todd Tavern, past the Totem Theatre and onward to Schwartz Crescent and is a series of plaques permanently fixed into the concrete.

They depict all the military engagements of the Australian troops starting with the Boer War of 1899 and ending with the second Gulf War in Iraq.

This is a new commemorative installation and I’m guessing it’s part of a series of special memorials and events taking place in Australia this year for the 100 year anniversary of the ANZAC’s landing in Gallipoli during World War I.

Whilst cycling along this concrete memorial, I note the wars and the countries where battles were fought and I’m pleased to see that there is a small mention given to the wars fought during the colonial period on Australian soil. I wished for a plaque all its own to remember these battles and bloodshed, especially here in Alice Springs.

It gets me thinking about a Melbourne Anzac Day in 1984. Seventeen women were arrested as part of The Anti-Anzac Day Collective. The Collective called for an end to Anzac Day and it’s “exclusionist, masculine mythology” and instead of the peaceful demonstrations of previous years of the Women Against Rape groups, they disturbed the parade with their loud chanting and singing.

My brother’s response was something like, “I’m not into glorifying war Gerry or going to war to kill my brothers” and my sister says something to the effect, “Those women are right to protest. War is about women and children too. Their husbands and fathers come back faulty.  Women are raped, civilians are slaughtered, and don’t forget that we fought a war on our own shores too!”

So I’m cycling along the Alice Springs construction site of a memorial to the wars and I’m wishing for something different, something less predictable, more controversial. I think I know what to expect. The list of wars fought. The badges to honour the Air force and the Navy. I get that this is important and that this is about the Australian military, but I’m hoping for a memorial to those others who are rarely formally acknowledged and remembered. I follow the trail from the Boer War, World War I, World War II, the Korean War, Japan, Malayan, and Indonesian, the Vietnam War, Afghanistan and Iraq wars. There’s a plaque to remember the peacekeeping missions.

I watch as the queue starts up outside the Riverside Bar – a wonky line up of eager drinkers at 11am. I consider the link between this scene and the frontier wars fought on our own soil from 1788 to 1934.

The men and women who participated in the resistance movement to highlight the atrocities of war and the need to end all wars are forgotten or not remembered either. I wonder about the great legacy of wars and the continuous traumatic impact of conflict on generations that never signed up.

The silence of returned soldiers can be considered as a means to protect others and to try to forget atrocities. But silent trauma like all trauma gets passed onto family members who can pass it on to family members. They’re not remembered here. Those who take asylum or refuge in our country from places of conflict are not remembered here. Nor the journalists who die for telling the stories of war.

I note that the mosaic memorial to those who have died by suicide and those who lost family and friends to suicide is no longer embedded in the concrete close to the newly created commemorative war path. The memorial to suicide was created by a collective of women in Alice Springs, three who lost their husbands to suicide and a fourth whose father killed himself. It became the site for the World Suicide Prevention Day event in Alice Springs each year.

Years of being driven over, weathered and walked over led to its deterioration and eventual removal. There is a link between war and suicide. Men killed themselves in the trenches, in Afghanistan, and after returning back home. In some circumstances, family members of war veterans can be at high risk of suicide also. The high incidence of suicide amongst Aboriginal men here in the NT is not separate from these other war related deaths. I take note that there is no plaque for this group.

So on this special Anzac Day 2015, I’m planning to remember all those who fought and battled and suffered in war whilst I’m listening to the bugle player on the hill. Australia needs some more honest remembering for the wounds of war to heal.  But as Michael Leunig said: “Truth is the First Casualty of War Commemoration.”