50 years devoted to each-other, and tourism 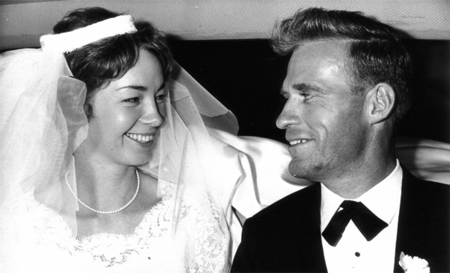 For Norma Creevey it was a no-brainer (although that phrase wasn’t coined for another 45 years) to stay in Alice Springs: The male – female demographic was utterly compelling.

That was in 1963. Two years later she married Pat Brennan: “You can see why if you look at a photo of him.”

This week they are celebrating the golden anniversary of a life devoted to each-other, and to the tourism industry.

They are still in the home (with a few more recent additions) which Pat bought for 2400 pounds in 1966 with a little help, by way of recommendation, from local horticulturalist, chook farmer and owner of the Oasis Motel in Gap Road, Bernie Kilgariff, who was starting his stellar political career as a Member of the Legislative Council at that time.

Norma and Pat met at the butchers’ picnic, held every Wednesday afternoon.

“Butchers shops would shut and we’d all go to the pub, play darts and have a beer and gamble,” says Pat.

He was a slaughterman at the Commonwealth government abattoir where the Gapview Hotel now stands. The drinks were at the Stuart Arms. Norma was working there.

“I was in Alice to meet up with a girlfriend, Bea, I’d worked with in Vancouver, in Canada,” says Norma.

“She wrote to say what a great time she was having in Alice, and I should come up for a look.

“Bea said when she phoned me there’s 25 guys up here to every girl, and there is a party every night.

“I said, OK, I’ll come up for a look, just for a couple of weeks. I ended up getting a job in the Stuart Arms.

“The blokes used to fight over the girls, they were so hard to come by. I’d just turned 21.

“I came for a couple of weeks and stayed a lifetime. How often do you hear that?

“The population was about 3000. None of my friends in Sydney had even heard of Alice Springs.”

Norma later got a job at Underdown’s Hotel, known as Uncle’s, notorious (in part) for having the only lift in town. It had a habit of getting stuck. Pat added to his reputation of a local lad by entering the lift while “there was no lift” and falling five meters down the shaft.

He was rescued by hotel receptionist Betty Olsen, lowering a broom handle down to him.

“The cops came ’round wanting to now what I was doing there. It was a Sunday” –  a legally dry day then, recalls Pat.

Ly Underdown’s establishment was multi-faceted: It was frequented by cattle station people who, amongst other business in town, were tested for venereal diseases at the Animal Industries Branch. It recorded the results on a blackboard visible to Uncle’s patrons, providing plenty of material for gossiping over a beer or two.

The pub burned to the ground in 1984, the day before Mr Underdown’s death.

How did Pat get into tourism?

“To get off the booze. Cattlemen would come in, have a beer, have a beer! So I got myself a taxi licence.”

Why did Alice need a taxi? Surely, you could have walked from one end to the other.

“No, the business was unreal. All the cottages near the Gap, all the coloured people living there. Especially on picture nights.”

These were at the Pioneer Open Air Theatre, where the YMCA backpackers’ hostel is now, in Parsons Street.

“We bought the cafe attached to the cinema. Sometimes the Ghan would come in and we’d have 80 for breakfast,” says Pat.

“I had a baby, John was three months old,” says Norma. “Sandy Cole used to come in and he’d be sitting out the back, giving John his first bottle for the morning, while I was feeding the people off the Ghan, and Pat was still working at the abattoir.”

Later Norma worked for Bill West-Lau at Ansett Pioneer. He was the longest serving manager of any branch in Australia.

Says Pat: “I used to do tours for him to Palm Valley, for the VIPs on Bill’s flights.”

Meanwhile the taxi game cranked up, with Jack Watkins’s Legion taxi base behind fuel pumps in Todd Street (yes, street, not Mall), where Marron’s Newsagency later opened, to be demolished in a disgraceful violation of the town’s heritage. In turn it was followed by the Aurora Hotel.

The fares were rich American tourists: “We’d take them to Standley Chasm, Glen Helen, Ross River. It was good money. Then there were the Aborigine settlements, take them home.” 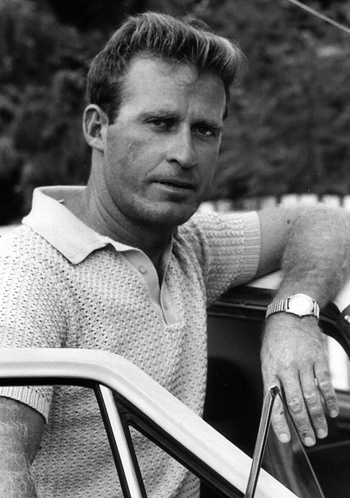 “He’d disappear for three days sometimes, to Yuendumu or Papunya, I wouldn’t even know where he was,” says Norma. “You used to sleep in the creek, didn’t you.”

Pat: “Napperby Creek was a good place to sleep. On a warm night you’d sleep in the creek.”

Norma: “I didn’t use to worry much in those days, I knew he’d turn up eventually, I suppose.”

This was before mobile phones. Even two-way radios ceased to work “once you got out of town. It was good to the airport and sometimes Bond Springs.”

It was a heyday for tourism. Keith Castle “really got things going,” the Brennans remember.

He was at Ross River first, then worked in the bank. He started up the consortium Central Australian Tours Association (CATA), with Green Brothers (Ross River), Jack Cotterill (King’s Canyon), Ansett Pioneer (Glen Helen and Palm Valley chalets and the Mount Gillen hotel in Alice Springs, cobbled together from Sidney Williams Huts) and Jack Taylor (Elkira in Alice Springs).

Pastoralist Bryan Bowman, after working with Kidman, started off on Tempe Downs station on the banks of the Finke, with a partner.

“Bryan had to walk cattle to the railhead at Oodnadatta.

“His partner, who was a city feller, done him,” says Pat.

After taking up Glen Helen station “Bryan set up quite a few people in tourism. Same with the abattoir out in Smith Street. Bryan was in there, too”.

Norma: “In the days of Ansett Pioneer a Fokker Friendship used to fly up here, three times a week, Foxtrott November India was the callsign. I introduced the first DX traffic management system to Ansett Pioneer here. It was a six hour flight from Adelaide, via Leigh Creek and Oodnadatta.”

The honeymoon trip for Norma and Pat was on the Old Ghan, not airconditioned. “It was terrible. Well, you couldn’t call it a honeymoon. I mean Pat didn’t make any booking.”

Pat: “We were supposed to pick up the train at Port Augusta but they said we don’t load cars here, you got to go to Marree, and we got there, stinking hot it was, we booked into the Marree Hotel, in the only room with airconditioning.”

At Marree the rail cars were “trans shipped” from standard to narrow gauge for the further trip to Alice.

When they boarded “Norma was down one end of the train and I’m up the other.”

Was it sleeper car or sitting up?

Norma: “He made him put his feet out the window all the way back to Alice Springs. Some honeymoon, geez.”

So how come this fairly disorganised place could have a huge boom in tourism?

Pat: “It was booming, I tell you. Ansetts and TAA put so much money into it. There was a fair bit of competition between the two in those days.

“Keith Castle was sort of organising it. What TAA came up with Ansett had to match it.”

Norma: “People used to come to Alice Springs for three or four days. And they’d spend another night at Ross River. There were all those chalets out there, throughout the Western Macs.”

Pat: “Western Macs was a five day tour. Palm Valley, overnight there, then you went ’round to Glen Helen, a couple of nights there, Redbank and Orminston gorges, then you came down to Serpentine and stay there another night. Ansetts had a lodge in there.

“The Namatjiras [the artist and his family] were a big drawcard.

“Ayers Rock used to work in with us in those days. That doesn’t happen no more.”

Norma: “Now – you know what’s happening. It’s Ayers Rock and Yulara that are sold, by the agents and by the inbounds and overseas wholesalers.

“The number of times I’ve taken people to the airport. They’ve come in from Ayers Rock the night before. And you are taking them to the Alice Springs airport mid-morning the next day. 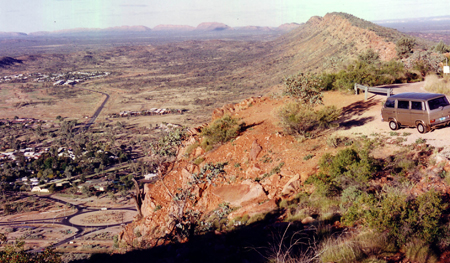 “There’s no time allocated for Alice Springs at all. It’s all Ayers Rock Resort. Two or three nights out there – can you believe that, at that cost?

“That’s when tourism to Alice Springs took the real downturn, when they extended the strip at Yulara, and the flights were coming in direct, from all points around Australia.”

Pat: “Alice Springs should have had the international airport instead of Cairns, the way tourism was going in those days.

“The cattle industry was so good, so many characters in it, people enjoyed it, looking at the things we had.

“Probably the mall destroyed a lot of tourism. All the coaches used to go down the main street. You could see A Town Like Alice. The Stuart Arms has disappeared, the stockagents all disappeared, the mall killed all that.

“The inner West Macs loop should have been sealed 30 years ago, and the Tanami and Plenty roads as well. Instead we spent money on going to war in Vietnam and Iraq, chasing wars and we haven’t won any of them.”

When work from CATA for Pat’s hire cars dried up, Norma went “door knocking” to the former clients in Sydney to keep the business going.

Jack Watkins, semi-literate, with a background in horse breaking for the army, yet with a meticulously tidy office, now had 10 hire cars. “He had the Galaxy in the finish,” says Pat. “He ran a good ship, I tell you.”

It was hands-on tourism in which many had a role.

Pat reminisces: “When you turn right off the highway to go to Standley Chasm, near Jay Creek, in the first creekbed, Aborigines would be there with camels. Let the tourists have a camel ride there and sell them artefacts.

“When they came back from the chasm Herb Adams had the Aborigines cooking steaks.

“I knew two Aborigine women really well and they used to get powder tins full of witchetty grubs we’d feed to the tourists. Those days are gone.

“These old Aborigines, cooking steak on top of a 44 gallon drum, that’s not on any more.”

Tourists could visit Aboriginal communities: “Amoonguna was a tourist spot, so was Jay Creek, we used to take tours to Santa Teresa, go into school and the teachers would have the kids singing for you.

“Same with Hermannsburg. They had the old tannery there. Gerhard Inkamala used to run it and told tourists all about it.

“The Namatjiras would do the dance just there by the church, do a corroborree for us.

“Those days are gone.”