Home Issue 6 Let Me See: about so much more than sight
Issue 6Issue 7Volume 22

Let Me See: about so much more than sight 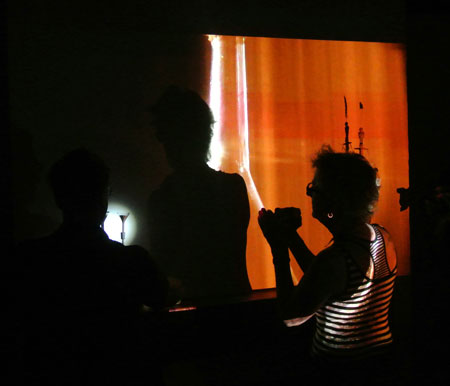 
To gather at the door with strangers (more or less); to be led inside, directed where to sit, where to stand, when to close your eyes, when to open; to accept looking and moving in and through dim light, even darkness, to try receiving a space or a work with senses other than the visual; to lie down finally, again next to strangers, as close as you might with a close friend; to not know what to expect: these were some of the pleasures of the art event, Let Me See: Arts & Technology. About so much more than seeing.

The setting was The Residency, one of Alice Springs’ oldest buildings, housing the town’s earliest administrators and famously accommodating the Royal Couple on their visit to The Centre in 1963. Since its relaunch under the auspices of the Araluen Centre for the Arts in a partnership with Heritage Alice Springs the building has become the home of a lively arts program. 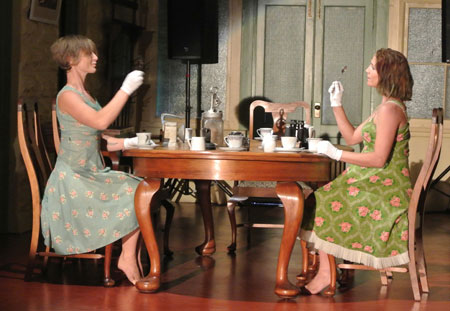 Let Me See was produced by Red Hot Arts Central Australia as the 2015 focus of their arts incubator program, which creates opportunities for new work. On a recent Saturday night (March 28) there were three scheduled sessions for the curated experience of four pieces.

The first, a dance performance, was staged in the so-called breezeway, a wide corridor separating the Residency’s workrooms, such as the kitchen, from the leisure areas – the bedrooms and sitting rooms. Titled The Tidy Rules of Comfortable Suburbia, it worked with some well rehearsed imagery of European settlement – the ‘civilised’ containment of life no matter how far from ‘home’. Its symbols were the tea set, the dining table, and some of the supporting technology, like an iron, and – in anticipation of sometimes venturing out of doors – binoculars. These were pressed into service by two of the town’s most accomplished dancers, always a pleasure to watch, Miriam Nicholls (above right) and Hayley Michener (above left), of the Dusty Feet Dance Collective. Through dance their characters moved from the rigidity of polite tea drinking, through hesitancy in the experience of the out-of-doors, to an embrace of and deep satisfaction in its freedoms. 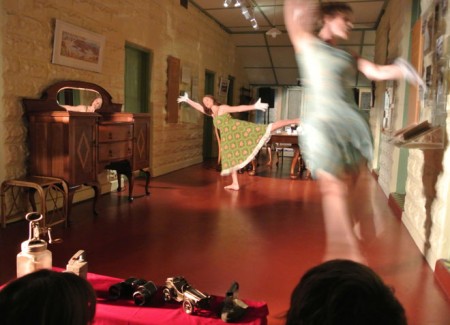 At the end of their performance an archival recording was played of an actual speech made by Queen Elizabeth II during that 1963 visit. It is actually quite an interesting speech, about different ways in which the Northern Territory is perceived, from outsider views of it as “the dead heart” of Australia with no redeeming features and as the exotic “last frontier”, to the very different experience of people who live here with an “intimate understanding” and who would prefer it any day to the “tidy rules of comfortable suburbia”. The speech retrospectively tied the performance more directly to historical time and place and might have interacted more richly with the material if played at an earlier stage.

From here the audience was shepherded into the Residency’s kitchen. From the start we had been in the hands of Milyika Scales (below), who undertook her hosting role very well, drawing people into a sufficient sense of complicity and security to go with the different kind of audience experience being proposed. In costume and at times 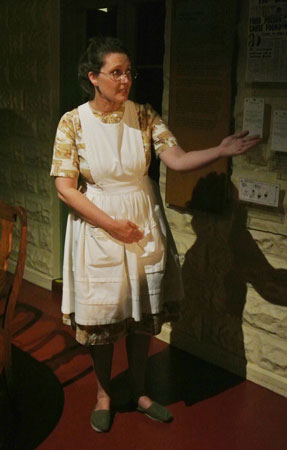 through performance she also moved into character as Agnes Dubois, an Arrernte woman of mixed descent who worked as housemaid at The Residency from late 1928 to 1936. At times, however, it was hard to know who was speaking. For example, I think it was the hostess Scales, empathising with but not in character as Dubois, who urged us to think about the building and by extension the settlement of Alice Springs from the Arrernte point of view. This and a number of other statements of the event’s intent were unnecessary, I thought, as the work could and should speak for itself.


In the  kitchen the audience was introduced to a different order experience of a work being spoken for. We could see on entering the room that it was set up for a screening, but were told to sit down in the semi-dark and close our eyes. We would first receive the filmed work, Meet You at the Edge, through “audio describing”, a practice which allows people with impaired vision to ‘see’ a film. After listening, then watching (which is more than seeing) I think the challenge of audio description is considerable and, for a work like this, would be best put in the hands of a poet. In using full sentences, timing dictated that the description stayed with action and conveying the physical environment, while in watching this film without dialogue or events, but fine performances (directed by Kat Worth) and beautiful cinematography (by Matt Woodham), the experience was far more immersive, emotional and impressionistic. 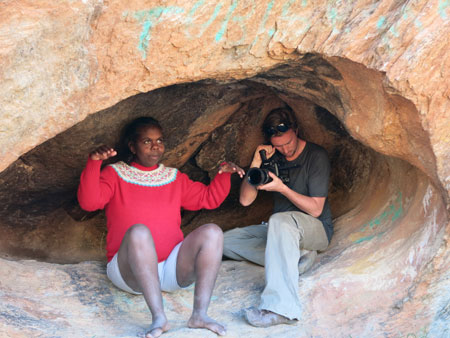 This work was a production of Incite Arts & stArts with D Performance Ensemble. Its three performers and co-creators – Tiffany Malthouse (at left with Matt Woodham, photo courtesy Incite Arts), Brandon Williams, and Martin Armstead – all have disabilities. Two of them are Aboriginal and one Caucasian. As they moved into and out of frame and through various locations in and around Alice, ‘difference’ was registering at more than one level, but at the same time it was being overwhelmed by their expression of simple human longings – for the experience of feeling at home in a place and feeling connection with one another.


Another kind of connection was invited by Pip McManus with Shadow Boxing, which took us back to the simplest elements of the moving image as art form, using light projection to throw shadows, transform scale and create illusions. The skilled ceramic artist continues to use tiny clay figures to stage pared-down dramas – archetypal moments of the human experience. Sometimes she stops at a single distilled image, but here, building on her explorations in video art, she showed her interest in the transformational effects of movement 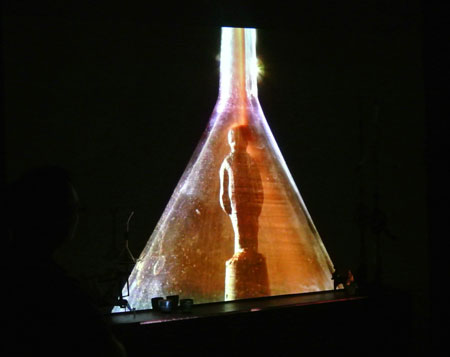 and duration. There was the joy of dance, for example, as expressed by a tiny whirling figure mounted atop an antique hand-drill and contrasted with the absorbed distraction of another tiny figure bent over his iPhone. There were the ‘sands of time’ pouring over another tiny figure. In projection the sand took on the theatrical character of red velvet curtains – “all the world’s a stage”. The darkened small square room with fireplace was a perfect setting for this parlour-style entertainment, with McManus in character as a Russian circus boss, Pipsetskya Petrovna Maximova (pictured at top). Her figures arranged on the mantel-piece, their shadows projected and upscaled onto the wall behind, ‘Maximova’, in thickly-accented commands, marshalled audience members as assistants (as magicians always do).

From here it was as though we all climbed onto a stage and moved through its sets – the Residency bedrooms – and around their tableaux vivants – a woman asleep over her handwork, another after reading on a couch during, as we imagined, one hot afternoon. Scales urged us to absorb the rooms with senses other than sight 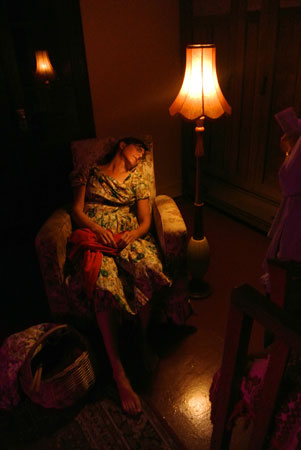 and soon everyone was breathing deeply their rather musty odours, stroking the walls and furnishing, and bouncing on the rather hard mattresses. We emerged on the front verandah and in the dim light were invited to dispose ourselves on couches and swags and told to close our eyes, for receiving a work titled Home, a collaboration by Tamara Burlando, Anna Satharasinghe and Kirsty Robertson (pictured performing at right). This was again an instance where an explanation was offered of the work that was to follow. I felt this over-determined its reception, framing it with this question – “what do we derive from our shelters and what do we sacrifice from having them?”

I don’t really know now where my imagination might have gone without this guidance for the sounds I was hearing and the scents I was breathing. But I don’t think it would have been beyond that indoor/outdoor opposition and thus the opportunity was missed to go back to the question that Scales had posed earlier in the evening, and that the Residency as a stage begs, about Arrernte perceptions of European settlement – the invasion of their home.

I hope there will be opportunities for each of the works in this thoroughly stimulating program to be further developed and taken to other audiences locally and beyond. The experience richly demonstrated the worth of the arts incubator.

Greater Queensland as a hotspot has been revoked this morning for the purposes of travel to the Northern Territory, including the City of Brisbane,...
Read more
Issue 7

By JULIUS DENNIS A paper published by the Institute for Energy Economics and Financial Analysis (IEEFA) has slammed the NT and Federal Governments for pinning...
Read more
Issue 6

Veteran tour operator and Eastside resident Charlie Carter says there has been "42 mm of steady rain over night" – brilliant news. However, as nothing...
Read more