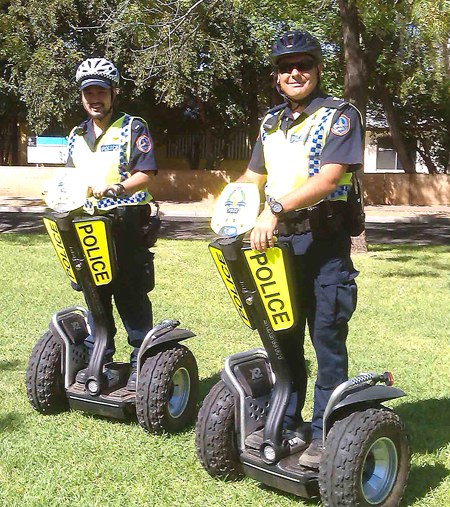 A 21-year-old man visiting Alice Springs for the speedway competition was robbed and bashed from behind, allegedly by three males of Aboriginal appearance, according to police.

They are seeking information from the public.

He was walking from the casino just after midnight this morning when the trio confronted him. The man handed over his wallet and mobile phone.

A hospital spokesperson says he was taken to hospital unconscious, treated in the emergency department and discharged himself this morning.

He says there had been a strong police presence at the matches, in the CBD and at bottle shops.

However, last night there had been four unlawful entries, including one at the town pool.

On a lighter note, Segways (at right) have become the latest mode of transport for the local police, adding to cars, bicycles, motorbikes and horses.

Constables Peter Luong (at left in the photo) and Craig Waters did their beat on Saturday on the two-wheeled contraptions which Const Waters described as “awsome”.