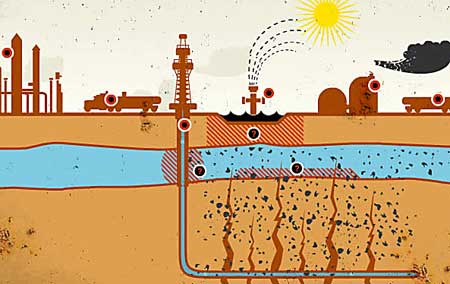 Treasurer Dave Tollner released the long-awaited Hawke report into fracking today which says “environmental risks can be managed effectively subject to the creation of a robust regulatory regime” and there is no need for a moratorium.

And Mr Tollner says there will be “exclusion zones over major towns preventing fracturing near these population centres.

“We’ll be seeking feedback on where these boundaries should be drawn.”

He says he will be asking the report’s author, Dr Allan Hawke, to stay on to lead a review of the regulatory regime, “engaging with the community and key stakeholders to develop a best practice framework.

“In the meantime, we are confident that with only 24 wells due to be drilled in the Territory this year, onshore exploration activity can be safely managed through existing legislation in conjunction with a new set of guiding principles,” says Mr Tollner.

Says the report: “The substantive weight of agreed expert opinion leads the Inquiry to find that there is no justification whatsoever for the imposition of a moratorium of hydraulic fracturing in the Northern Territory.”

“These guiding principles clearly set out how the industry should conduct itself for all onshore oil and gas exploration in the Territory.”

• The NT Government form a Cabinet Sub-Committee, chaired by the Deputy Chief Minister and comprising the Ministers whose portfolios cover Lands, Planning and the Environment; Land Resource Management; Mines and Energy; and Primary Industry and Fisheries to oversee the work required for the Northern Territory to set the standard for a best practice regulatory regime.

• The Northern Territory Environmental Assessment Act be restructured in the light of this Report and the proposed bilateral agreements with the Commonwealth on environmental assessments and approvals.

• The NT Government propose through the Council of Australian Governments (COAG) Standing Council on Energy and Resources that the Australian Council of Learned Academies (ACOLA) host a workshop of international academies to consider their collective findings, learn from each other and identify the findings shared by all of the academies.”

The final recommendation (the workshop) “is being accepted in principle given the comprehensive review just completed which took into consideration findings from interstate and international work on hydraulic fracturing.”

Drew Wagner, Executive Director the NT Minerals Council, says: “The report clearly states that there are no scientific barriers to initiating the development of this important energy supply [and the council urges] the Territory Government to take immediate steps to facilitate this.

“Of course, any further development must be supported by appropriate and transparent approvals process to ensure all developments are properly assessed,” says Mr Wagner.

“The proposal to establish exclusion zones around major Territory towns could allay residents’ concerns and we look forward to seeing all proposals for these boundaries.

“We believe further economic development in the Territory’s rural and regional areas needs to be under-pinned by securing our vast unconventional gas reserves as an energy source, and hydraulic fracturing has the ability to assist in this.”

Jimmy Cocking, CEO of the Arid Lands Environment Centre (ALEC), said: “The report confirms what we have been saying all along. The regulatory framework in the NT is not strong enough to ensure that our precious aquifers are protected from fracking.

“We maintain our calls for a moratorium on shale gas exploration until it can be proven safe. The NT Government needs to become a regulator and compliance enforcer rather than simply a promoter and fixer for the industry [especially now that] the depressed oil price is leading to low exploration activity for the foreseeable future.

“Renewable energy and sustainable innovation is key to our regional economic success.”