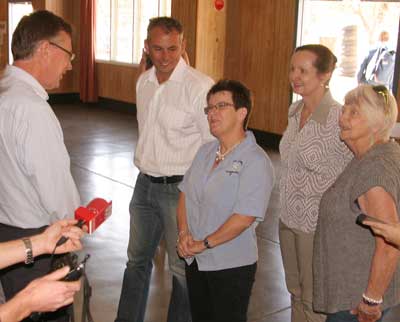 Member for Araluen Robyn Lambley yesterday fired a broadside at Adam Giles, the Parliamentary leader of her party, with a ferocity that is rare in Territory politics.

She was speaking during a motion of no confidence in the Government brought on by the Opposition.

Ms Lambley, who was sacked as a Minister and now sits on the back bench, said she would abstain from voting on the motion.

But she took the opportunity of presenting her views about the wash-up from the events earlier this month when – as she put it – “nine out of 14 CLP parliamentary wing members voted to have [Mr Giles] removed from the position of Chief Minister”.

Ms Lambley said: “I refer to Alice Springs as the centre of the universe, and it is. I love everything about Alice Springs, the people, landscape, opportunities, diversity and lifestyle.”

She said the public “either want the leadership instability within government resolved, or they want to go to the polls. Territorians do not want to continue to know our government as a source of jokes and ridicule across the country.

“I will always be philosophically aligned with the Country Liberal Party and conservative politics.

“His colleagues generally felt he had lost touch with average Territorians, he was arrogant and his general dishonesty was eroding any respect we had for him.

“International convention is such that once a government leader has lost the majority support of his or her colleagues, they resign.

“We were advised it is unprecedented in the history of Australian political history that a leader not resign under these circumstances.

“Adam Giles did not resign. Instead, he threatened he would prefer to bring down our government and take us to an early election, rather than resign and make way for Willem Westra van Holthe to become the new Chief Minister.

“His supporters also threatened to bring on an early election. Adam Giles told the Alice Springs CLP Branch meeting on Wednesday, 4 February, that Kezia Purick, Bess Price and David Tollner would all prefer to have an early election than accept Willem Westra van Holthe as the new Chief Minister.

“In hindsight maybe that is what we should have done. Perhaps we should have agreed with [them]. I suspect in hindsight they were right. We would not be in this standoff we now find ourselves – a majority of wing members not supporting their Leader.

“I have no faith in a government lead by Adam Giles. I have stated publicly I believe Adam Giles has no integrity. I stand by that statement, and that alone is enough to mean he should not hold a position of community leadership.

“I believe a political party should be bigger than one person and as such I have not sought to depart from the Country Liberal Party.

“Certain members of this government, and even the Federal parliament, do not seem to understand the community expects more from its leaders than getting drunk at topless bars or telling bare-faced lies.

“In addition to having no faith in the Chief Minister, I have no faith in the Treasurer and nor do I believe he is an appropriate person to be a leader in our community.”

Ms Lambley said “a starting point for Adam Giles is to apologise for the terrible accusations and allegations he made in the Alice Springs Country Liberal Party branch meeting on 4 February 2015.

“He defamed and damaged the reputations of myself and many other colleagues. He breached the confidentiality of the parliamentary wing.

“I believe Adam Giles needs to step down from his position and give us all an opportunity to rebuild before we lose everything. Look at what happened in Queensland just a few weeks ago.”

During the same debate Independent Gerry Wood, who also abstained from voting on the motion, said: “We are the laughing stock of the nation. We are the most disunited bunch of amateurs that have ever ruled the Territory.

“We have set back statehood maybe forever. Everything we do seems to be a mixture of who will win the next election, at what cost.

“Should our party reign supreme? Look at me, look at me. Have we forgotten who elected us? It was not the party, it was the people.”

PHOTO: Ms Lambley (second from right) in 2012 with former Chief Minister Terry Mills (left) who was deposed by Mr Giles (second from left) while Mr Mills was in Japan on government business.

PLEASE NOTE: We are quoting from an uncorrected proof of the daily Hansard.