Police say they discovered an alleged “active illicit drug laboratory” when they raided a residential property in Gillen yesterday.

Members of the Drug and Organised Crime Division, Illicit Drug Laboratory Team, had traveled to Alice Springs to take part in the raid at which “a male and a female were arrested at the residence and are currently assisting police with inquires.

“All illicit drug laboratories have the potential to explode or cause severe chemical hazards to the police and public. This scene is effectively a chemical hazard and is being treated as such by Emergency Services,” the police statement said yesterday.

“The premises have been secured so that police and emergency services can remove any hazards from the area. The threat currently is restricted to the premises and no evacuations are necessary.

“The method being used by the alleged offenders is known as the ‘shake and bake’ method and if not appropriately dealt with, explosions have occurred in the past.”

This is the third active drug lab discovered in Alice Springs in recent months.

“Backyard chemists who use these methods often don’t fully appreciate the threat they pose to themselves, the public or Emergency Services.

“Their goal is purely to produce these products for their own use or for profit, they have no concerns whatsoever about the danger to their neighbours, their own family or friends.” 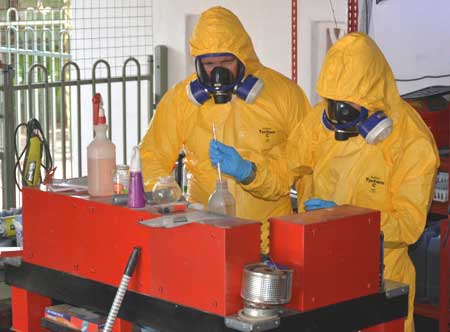 “Police located and seized over 260ml of liquid which is believed to contain methamphetamine and items used to manufacture dangerous drugs.

“The pair were arrested and charged with: Manufacture and possess a schedule 1 drug – commercial quantity; supply dangerous drug; administer dangerous drug to self. They will appear in Alice Springs Magistrates Court this afternoon.”