Grief for a free spirit taken by a wild river

The river brings life to the desert and it can take it away. 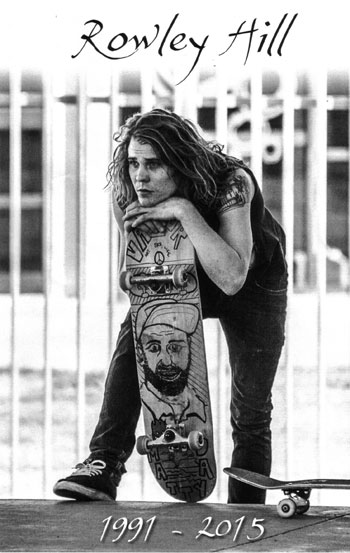 Rowley Hill was born in Alice Springs – a Yipirinya boy – and died in the wild waters of the rising Todd, not far south of Wigley’s Gorge, on January 8. He was 23 years old.

A painting of the warm brown river pushing down its rocky course adorned his coffin as he was laid to rest in desert ground on Friday – family and friends in their hundreds, from all parts of the community and beyond, gathering to farewell this “magnetic spirit” who had “burnt brightly and died quickly”.

That last evening he was in great spirits. He called his friend Pirate, instigator of the Black Wreath collective of local musicians, singer with Uncreation; Rowley was the drummer. The Black Wreath logo, symbol of their creativity and drive, also adorned the coffin.

“He was excited that the river was flowing and ready for the next adventure,” recalled Pirate at the graveside.

“He wanted to see his sweetheart Jaz first so he told me to pick him up from the tattoo shop. He came out soaking wet, skating in the rain, popped a huge ollie over the island in the road and jumped into the car. He was beaming.”

It was too hard for Pirate to say much more about what happened. We know that both men got into the water above the gorge, intending to ride the river down to the Telegraph Station. They soon got into difficulty and only Pirate made it out.

He will always wish that fateful day ended differently: “I don’t know why we made the same choice and got a different result.”

Looking back, all of Rowley’s family and friends must wish he’d been more cautious that day, but that was not who he was.

His mother Jane Ulrik, speaking of the hardest thing any parent ever has to, nonetheless accepts that.

“His life was full, nothing mundane for Rowley, action-packed and high excitement,” she said. “That was how he left us and I’m actually really grateful for that. My little Yipirinya boy grew into a man with integrity, style and most of all he lived his life, his way.”

Black Wreath musicians, Rowley in the white shirt in the centre, Pirate second on his right.

“I’d love to tell Rowley to be careful,” said his friend Rainer Chlanda. “Many tried to tell Rowley. You couldn’t, he wouldn’t listen … He seemed to have the hunger for all things extreme from the absolute get go. It was innate. 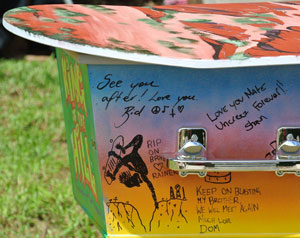 “In hindsight I have no desire to do or see anyone else do anything reckless or daring involving water … You mature over these things, you learn, of course, but I know if I was there at the time I would have jumped on that tube without hesitation … I’ve seen him do so many more crazy things and come out unscathed. He was so able and brave and seeming invincible that nothing in his own control could hurt him. It had to be an epic force of nature that eventually he had to surrender to.”

“He taught us to appreciate every moment, to live passionately and cherish our loved ones,” said Pirate.

Rainer saw that too: “He was charismatic, he was funny, he was daring, he was wild, but those who were lucky enough to get to know him closer and well knew he had a whole lot of love, a whole lot of giving, compassion, and he was so goddamn authentic, I couldn’t stress it enough. This was crucial to who Rowley was, he was the realest dude I know.” 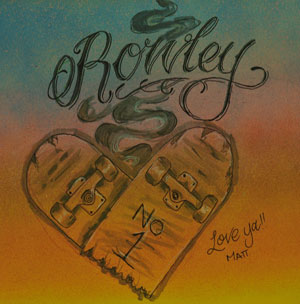 His mother Jane spoke of “the many hours of waiting, worrying and at times heartbreak” during his “fast and at times furious” life but she takes great comfort in his recent maturing: “He was happy and looking forward to the future … He loved me and appreciated my commitment to him. He knew he was loved, of that I’m sure.”

His brother Samual Hill acknowledged Rowley’s “larrikin” character yet also stressed the “much deeper side to him – he was loving and caring, he was always there for a chat (usually over a few beers, which I would have to buy of course). He had it all, charm, good looks, wit, and he was genuine.”

His partner Jasmine Gordon said she had never met someone “who was so free-spirited and loved by so many, and absolutely beautiful, and I doubt I ever will again”.

His cousin Jasmin Ulrik commented on “the outpouring of love and hurt from so many people” that showed  “how much Rowley impacted so many lives”. She thanked her cousin for his energy, fearlessness “and always, eventually, making us laugh”.

His friend Jamie Toyne remembered him as “the cool kid” but also the one who would always welcome into their friendship group the kids on the periphery “who hadn’t really found their place at high school – there are some people who are here today and many more who would say Rowley was the one who gave them a sense of identity in those early teenage years.”

His friend Hugh Winterflood (aka Skank) evoked his qualities with a poem, ‘The Immortal’: 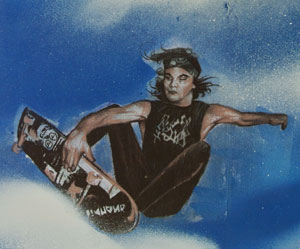 A fire burned behind his eyes
A fire which would warm the heart
Of anyone who was by his side.
That fire burned inside his mind
It burned inside as quickly
As he moved along his earthly life.
It was his energy and drive,
His empathy and pride.

Bravery and loyalty
Will be taught to our young
Through the crazy stories of Uncle Rolls
And all that he done
And all of it fun.

Those stories abounded at the graveside and later at the wake and laughter lightened for a moment even the heaviest of hearts.

Rowley has gone now, though something surely remains: “I don’t know if he’d be amped to hear me saying this,” said Rainer, “and by no means am I trying to suppose he’s an intangible spirit flying around for all of eternity because imagine how frustrated he would be if he couldn’t hit his drums, couldn’t step on his board, or antagonise his friends, so I’m not supposing that, but his spirit or his soul or whatever you want to call it, his energy, he had so much of it, that just can’t dissipate into nothing, it’s been absorbed somewhere – back into the land.”

And “the tears have flowed”, chanted Skank, “as much as that devastatingly beautiful river”. 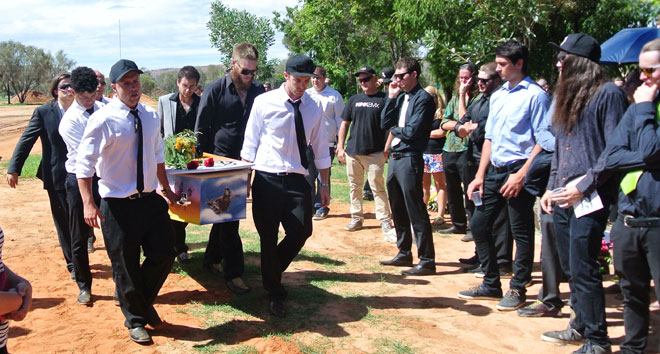 Compiled by Kieran Finnane from tributes at the memorial service. Rowley was a close friend from early childhood of Erwin’s and my son, Rainer. We spent many charmed hours in his company as a boy. Later we would share not a few worries with his parents, but joys too, as our boys with their taste for excitement and the extreme grew up. We grieve the loss of his young life and for the pain and sorrow of his family and friends.