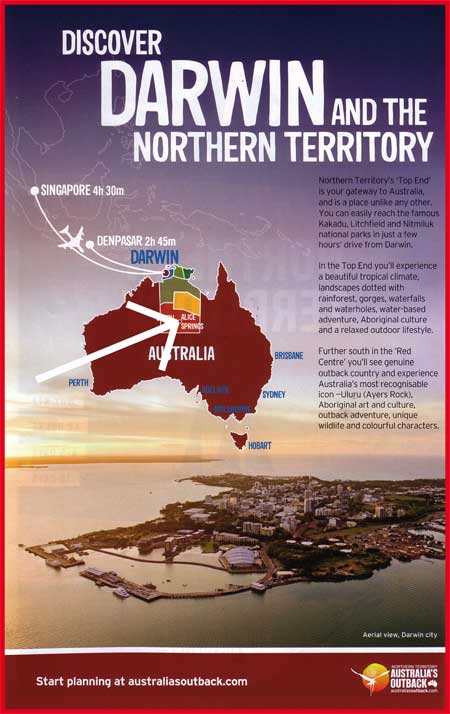 You’d think that when Chief Minister Adam Giles and Tourism Minister Matt Conlan are spending taxpayers’ money promoting the Territory tourism, then their home town, where a majority voted for them, languishing in the economic doldrums, would get a fair suck of the sausage.

Amidst 80 photos in a glossy 48 page insert in an airline magazine circulated in Asia, Alice Springs features once: As a dot (see at right – we put the arrow in).

The mostly Asian people depicted frolicking in spots of natural beauty or munching five star meals are doing so nowhere near Alice Springs.

Amongst some 13,000 words of text, The Alice gets two mentions: As a reference point to the location of Santa Teresa (“an hour from Alice Springs”); and as a venue for the Imparja cricket cup.

And then there is a reference to the “dusty Henley-on-Todd regatta” but it doesn’t say it’s staged in Alice Springs.

Mr Giles, trademark toothy grin firmly in place, is telling the airborne reader “what Festivals NT is all about”.

He doesn’t waste a single breath on the Alice Springs Festival, nor on  Desert Mob whose artists have catapulted The Centre into the international spotlight; not the Beanie Festival; not the annual gathering of truckies at the National Transport Hall of Fame (they’re expecting 10,000 people next year); nor Wide Open Spaces or the string of rock, folk and traditional music events throughout the year nor the sensational Finke Desert Race.

Jennifer Simon, spokesperson for Tourism NT (TNT) which has been getting between $40m and $50m a year, provided the following information: “The insert was circulated in 7000 copies of the inflight magazine on all Jetstar Asia flights for the month of November.

“Tourism NT was the title sponsor and committed approximately $24,000. We received eight pages of advertising as part of the package and received 2000 run-ons for our own distribution purposes.

“We had influence over the editorial content and our objective was to highlight experiences that we know appeal to the South East Asian market and specifically promote the regional areas of Katherine, Kakadu and Litchfield, with Darwin being the gateway port being serviced by Jetstar.”

This seems to make it clear that TNT is taking the view that what Alice Springs has to offer – including as the gateway to the MacDonnell Ranges, east and west – does not “appeal to the South East Asian market” or else that TNT doesn’t know whether it does or not.

This is an interesting proposition given that the TNT office has just been moved back to Alice Springs. 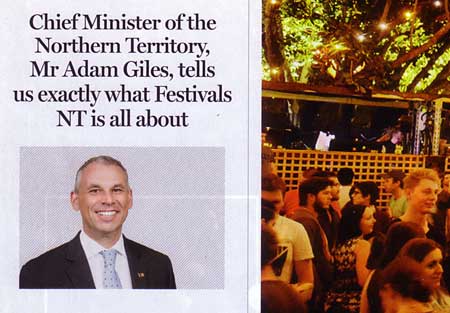 “We received no response in regards to this marketing effort and advertising cost was likely a factor.

“Our members receive numerous co-operative advertising opportunities throughout the year and they assess which ones are best suited to promote their businesses.”

Clearly, these government instrumentalities also pumped public money into the insert, but Ms Simon doesn’t say how much. Based on TNT’s contribution the total cost was $144,000.

Given that TNT “had influence over the editorial content,” and that the Alice Springs tourism industry is hardly flush with money right now, there would have been a great opportunity for TCA to ensure its members were getting exposure in the brochure via the government participants.

Judging by the brochure’s content, TCA clearly did not.

It would have been a remarkable first in many years for TCA to be performing its watchdog role over TNT.

Ms Simon did not reply to our question about other airline magazines the brochure is being circulated in.