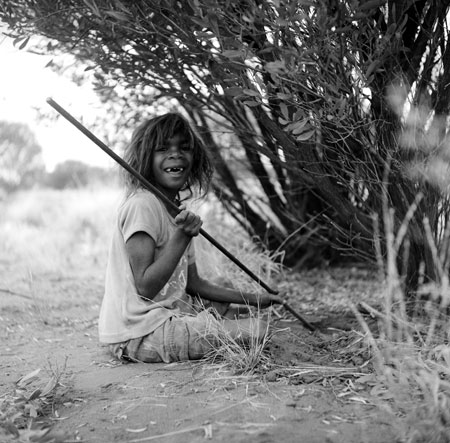 What happens when you arrive fresh from a big international city of 40 million inhabitants to live in a small remote Aboriginal community, with just 350 – what kind of impressions do you get? And after four years, what do you leave behind, what do you take away?

Tamara Burlando’s exhibition, Papunya Smiles, at The Residency in Parsons Street, describes something of that experience. Its black and white photographs, as well as some that are not on the walls, are also published in a small, beautifully presented book of the same title.

Burlando arrived in Papunya from her native Buenos Aires, capital of Argentina, the second largest metropolitan area of South America after Greater Sao Paulo. She came to join her Australian husband and they both took up positions as youth workers in the community, staying for four years. During this time their son was born and grew into a toddler.

As her title suggests, Burlando has a very positive take on the community and it is interesting to reflect on why. 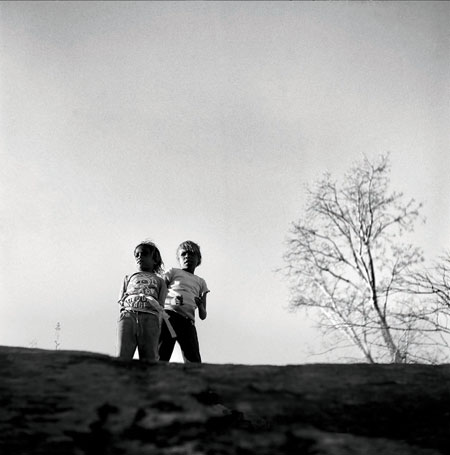 Given her position it is not surprising that her subjects are almost exclusively children and adolescent girls. Not everyone is smiling. Some of the strongest images are incisive portrayals of youthful seriousness. Others capture the infectious charm and energy of children living without inhibition in a stimulating natural environment – playing in freshly inundated pools, digging for witchetty grubs, ranging over the rock formations of their magnificent homeland.

Among them, in the book, and notably on its cover, are images of young girls at play, dressed only in nickers. The girls appear entirely relaxed and thoroughly engaged in what they are doing. For the girl on the cover this includes happily meeting the gaze of the viewer (the camera).

In this time of heightened consciousness, even excessive anxiety over the portrayal of children, this photograph in particular is immediately striking. Questioned about it at her artists’ talk on Tuesday, Burlando said that in the context of Papunya nothing could be more natural. Children frequently move around the community dressed only in underwear or else with no clothes at all. It has only been here in town that she has become aware of possible concerns, leading her to not make an enlarged print of the book cover image.

One admirer of the work welcomed her photographs’ expression of childhood innocence, given greater rein and freedom of expression in past decades. Burlando might have been perceptive, though, when she commented, “The innocent is myself”, by which I took her to be acknowledging a certain naivety, as much as it is refreshing to encounter.

After four years in Papunya she is not naive about outsider perceptions of the community, preoccupied as they are by disadvantage and deficit. She questions the assumptions “that we know everything” and in any case has consciously chosen to ignore them and focus on the best of Papunya’s world.

This was influenced partly by the origins of the project – her desire to leave with the community a token of gratitude for her experiences, including for the care taken of her as a young mother and the welcome given to her child. So naturally her thanks would be expressed in positive terms, but she also commented with conviction on the “privilege” of the Papunya children, growing up in 2014 in that environment of freedom and beauty. 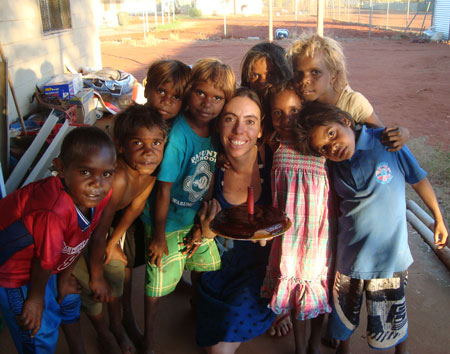 Her black and white photography – ­using an old film camera, with a large 120mm square negative – has a certain retro, even nostalgic feel to it. There are some subtle signs of the contemporary in the images but they could mostly be read as dating from another era, consistent with her appreciation of the children’s privilege – their kind of experience being inaccessible to most contemporary children.

Right: Tamara Burlando and Papunya children, with a birthday cake.

Burlando is doubly an outsider, non-Aboriginal and non-Australian, and this seems to have lent her a certain privilege as well, an approach to her encounters free from the national race relations angst – simpler, more open.


Papunya Smiles, first launched in Buenos Aires in September as part of the Festival de La Luz, shows at The Residency until 27 February, 2015. The book (with text in English and Spanish) is also available for sale there.

Below: Burlando’s show installed at The Residency, photo courtesy Tara Leckey who runs the Heritage Alice Springs Inc arts program at the historic venue. It has had some 6000 visitors through the doors since its launch under HAS management in April. 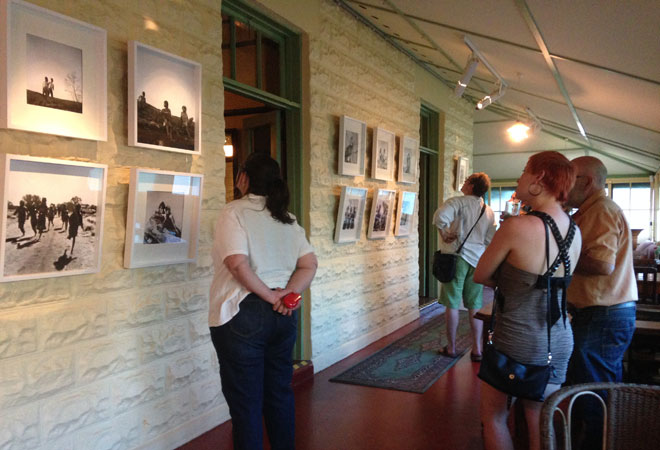 The Bureau of Meteorology has declared that La Niña has developed in the Pacific Ocean, upgrading La Niña alert status to an active event. This...
Read more