Pipeline: Is Adam Giles loyal to NSW or the NT?

The pipeline cat is out of the bag: What Chief Minister Adam Giles is offering to all-comers are the Territory’s massive onshore gas reserves accessible, at least partly, only by fracking.

But the local environment lobby is saying Mr Giles is selling out his own constituency to provide gas to the NSW where fracking is a political liability because of wide-spread community concern.

“NSW communities have stood up strongly,” says Jimmy Cocking (above left), of the Arid Lands Environment Centre. He says Mr Giles is gearing up to do deals while an inquiry into fracking in the NT is still under way.

“Unconventional gas resources” is code for needing to use the controversial fracking process to recover the resource.

Says Mr Giles: “The pipeline, known as the North East Gas Interconnector, offers the private sector a unique opportunity to lead the development of a nationally significant infrastructure project.

“States along the eastern seaboard urgently need to find new sources of energy and the interconnector is an attractive solution.” 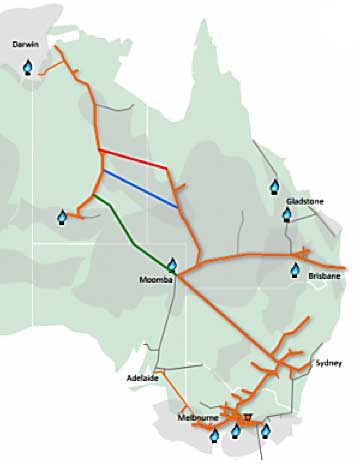 Submissions close on December 15. The options are a pipeline from Tennant Creek to Mt Isa or from Alice Springs to Moomba in SA.

With no takers for the project in hand yet, Mr Giles has already signed an MOU with the New South Wales Premier Mike Baird granted the scheme Major Project Status.

Mr Cocking says 90% of the NT land mass depends on groundwater for it survival. He says gas escaping to the surface and coming out of water taps is not scare-mongering, but these are well documented events the world over where fracking is used.