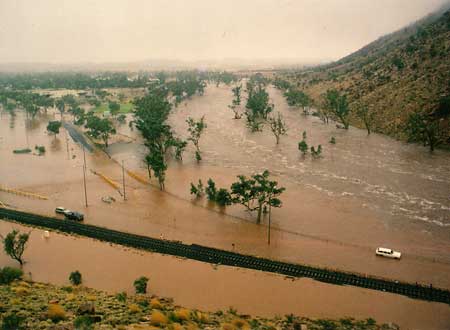 The town council last night expressed unanimous opposition to the sale of the Territory Insurance Office (TIO), proposed by Chief Minister Adam Giles, and rejected several of his proposals for local government reform.

Councillors had serious concerns about threats to democratic processes, and about what ballooning costs for flood cover, which seen inevitable if the insurer is sold, would have on the local economy – and the council budget.

(PICTURE at right: The Gap, looking north-east towards the town, in the 1988 floods. By Hans Boessem, Todd Camera Store.)

The council was sitting in committee, making recommendations for the formal council meeting in a fortnight.

Alice Springs is built on a flood plain but homes and businesses insured by TIO are currently secure under the automatic flood cover of the Territory Government owned company.

He said the mayor of Katherine, which had suffered serious floods in 1998, opposes the sale.

In a statement released after the meeting Cr Paech said:  “The CBD, large parts of the Golf Course, Old Eastside, the Gap, Sadadeen and the rural area on the eastern side are vulnerable according to flood maps produced by the NT Government.

“The Town Council offices and our library are smack in the flood zone.”

Cr Paech asked CEO Rex Mooney whether there had been any communication to the council from Mr Giles. Mr Mooney said: “None whatsoever.”

When Director Finance Paul Della was asked if increased costs of insurance would affect rates, he said the added expenses had the potential of being passed on.

Mayor Damien Ryan said the the council had opposed the plans of the previous government for selling TIO.

Deputy Mayor Kylie Bonnani said the council should ask Mr Giles in a letter to specify what projects a sale of TIO would bankroll, and to give guarantees they would go ahead.

Cr Steve Brown said TIO “used to keep prices down” and he would be “very concerned” if the insurer were sold.

Cr Eli Melky criticised the lack of consultation, and said the role of TIO in sport and community sponsorship may end.

The council rejected five out of 11 recommendations for changes in local government put forward to the council by Mr Giles, referring to a report “authored” by the NT Electoral Commission. The council accepted one recommendation with grave reservation.

These issues will also come before the next council meeting for decision.

It was unclear to last night’s meeting whether the government had already decided to press ahead with the changes: Cr Melky said: “Has this already happened? Is it a forgone conclusion?”

On November 6 Mr Giles said in a media release: “Chief Minister Adam Giles has confirmed that the next local government elections will be deferred to August 2017 to avoid a clash with Territory and Federal Government polls due in 2016.”

Last night the council seemed inclined to have the four-yearly election moved from March to August.

This would avoid holding the poll during the wet season – a big issue in the Top End – and newly elected members would have more time to deal with the annual budget, handed down in June.

It would give new members a longer “learning period,” suggested Cr Paech.

But the mood of the meeting was clearly against deferring the next council election by 18 months.

Other suggestions found unacceptable by the council included:–

• extending to 18 months the time casual vacancies (councillors resigning or passing away) can be filled by nomination;

• appointing rather than electing the Mayor or President;

• giving the Electoral Commissioner the power to set polling hours for by-elections; and

The council agreed with:–

• council being able to conduct by-elections (the last one, filling the vacancy of Cr Geoff Booth after an escort service scandal, cost the council $90,000);

• allowing by-elections by postal vote only; and

• extending postal voting and early voting services to all voters.

Cr Melky said to defer the 2016 election by 18 months (rather than six from March to August) is “wrong” and “cancelling” an election is “tampering with democracy.”

He said the present council would get a “free ride for 18 months” and the principle of councillors being held accountable to the public after a set term would be “violated”.

CEO Mooney, making it clear he was expressing his own opinion, said it is “not democratic” replacing a councillor by nomination. He said councillors are referred to in the Local Government Act as “elected members” and not “appointed members”.

In local government “you put your hand up and stand for elections”. To become a councillor by a “tap on the shoulder” is in conflict with democracy.

Cr Jade Kudrenko said she would not be “comfortable” with an extended term of the current council.

‘People passionate about their parks’

Cr Paech said the consultation via the council’s website so far has been inadequate – with a few more than 100 people responding.

The public seemed solidly opposed to the sale of parks, and Cr Melky pointed out that none are on the market. But it was clear there is not enough shade, and play equipment is aging and perhaps dangerous.

There have been solid expressions of interest from residents in helping with the maintenance of parks, and the Eastside community garden (PICTURED above left, during its planning in 2010) was mentioned as a good example.

Mayor Ryan said: “We need to have a model of parks management. People are passionate about their parks and they want to be involved.”

Cr Brown said parks, or parts of them, should be sold only if the money was spent on parks improvements, and provided the community agrees: he is not in favour of “imposing a position”.

Strong and gusty winds are developing in the southern NT as a trough moves across inland Australia. Severe thunderstorms are happening now in the...
Read more
Issue 38

By KIERAN FINNANE In a weekend crowded with major arts events – with both Desert Mob and Parrtjima opening last Friday –  the new Minister...
Read more