The zombies descended. But they weren’t alone. Superheroes, princesses, vampires, robots and spiders travelled from across Alice Springs to Stephens Road, Hillside Gardens and Eagle Court to trick or treat. By 5.30pm on Friday perhaps the biggest Halloween swarm in recent memory was underway.

Alli Anderson and her friend Natasha Ellis, both 11 years old, prepared for their first experience of “trick or treating” door to door. Costumes and makeup were at the ready; lines were well-rehearsed. Targets were chosen.

“Where will you go?” “Where the Americans live!”

Fears of creepy clowns, jokers and scarecrows took a back seat to a love of chocolate. “The American estate has really big bags! And better candy, even Reese’s peanut butter cups!”

Imani Collins-Thompson came with family members from her Eastside home to knock on the doors along Stephens Road. She wouldn’t go away empty-handed. A crowd of children and parents joined her. 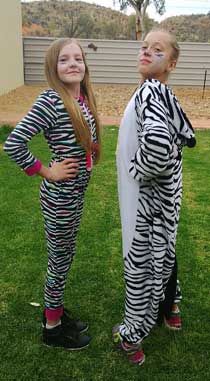 Skye Thompson, Imani’s mother, said that they had been trick or treating since Imani was six. “It’s something for the kids to do.”

She agreed this year’s celebrations seemed larger than previous years, maybe because Halloween coincided with a Friday. The costumes are “more creative; bigger kids and parents are dressing up. I haven’t heard about this happening in Darwin or Adelaide.” 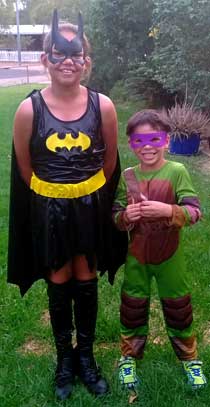 Alli guessed that about half of her school class would be participating in Halloween. “Just because it’s American, some don’t go.” But those who did appeared to be having a good time.

Neighbours sat outside, along the streets and driveways, commenting on their favourite costumes and handing out candy. Older children kept a watch on their younger brothers and sisters. Ghosts and ghouls practiced their manners.

Like a social flash mob, by dark, most children were heading home to count and trade the evening’s takings. Whatever the origin and history of Halloween, Skye says that the key to its popularity is simple: “Kids like lollies.”
PHOTOS (from top): Hillside Gardens getting scared • Zebras Natasha Ellis and Alli Anderson • Imani Collins-Thompson and Joshua Bell.