Cr Eli Melky in the council chamber. Photo from our archives.

The Town Council’s Finance Committee appeared to meet entirely in open session last night. Not only were the full monthly accounts included in the papers, as they have been for some months now; there were also open officer reports and nil confidential reports. There was still, however, the opportunity for general confidential business to be raised, as is to be expected, and it may have been.

The landmark open committee meeting may well have gone unnoticed except for the congratulatory remarks of Councillor Eli Melky. He directed them to the CEO and Director of Finance as well as to his fellow elected members. But nobody took the opportunity to congratulate him where the credit was perhaps most due.

It was Cr Melky who drove this issue from the start, recognising the farcical nature of the one-minute-wonder ‘open’ sessions of the Finance Committee, which in fact disclosed nothing at all. He has been nothing if not persistent and has finally won the day.

Yet his congratulatory remarks were received in silence, with a couple of sideways glances and grimaces. Such is Cr Melky’s isolation in the chamber. Why, you might wonder?

One reason would be his exhausting verbosity. Last night he would almost certainly have talked more than all the rest of the elected members and officers put together. The art of summary and concision is lost on Cr Melky, who appears to mistake holding forth at length for debate. Perhaps his intention is to stimulate debate but he mostly has the opposite effect, draining the issue of all interest so that his colleagues (and others present in the chamber) become desperate to move on.

Last night he dealt with two subjects in particular at wearisome length and to no avail. One was a possible move by council to exclude certain animals, such as roosters, from the suburbs. Council’s solicitor Chris Turner had provided advice that council does have this power under current by-laws but only after consulting with the community (ie, allowing 28 days to pass following publication of a notice of its intentions to act).

The issue has currency because a local resident has refused to surrender roosters to council acting on complaints received. This particular matter will be dealt with at the end of month meeting and Cr Melky was at pains to keep his remarks general.

Mayor Damien Ryan, looking exhausted from Masters Games duties before the meeting even started, was keen to dispense with the issue, as difficulties in this area don’t often come up.

However, Cr Jade Kundrenko, chairing, said council needed to respond to the discussion in the community. She more than once asked Cr Melky to word a recommendation for elected members to consider. Each time Cr Melky returned to sifting through his already stated thoughts on the matter, without providing a recommendation.

Cr Kudrenko finally took a straw poll of whether elected members wanted to simply note the solicitor’s report. All hands went up with the exception of Cr Melky’s.

Almost 18 minutes had passed and he had got nowhere. 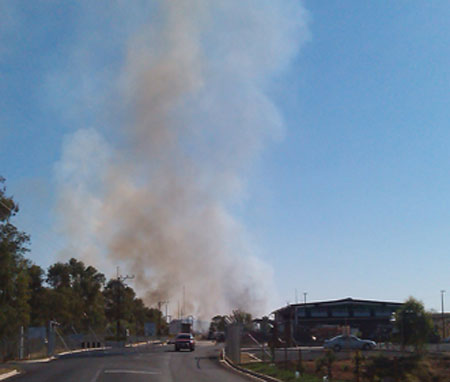 The second lengthy matter was to do with the handling of fees and charges and behaviours at the Regional Waste Management Facility (RWMF, formerly the landfill, colloquially the dump). Cr Melky’s concerns were primarily around the disgruntlement of some commercial users with changed credit arrangements and of some residential users with having to sort recyclables from their general rubbish. The Director of Finance Paul Della seemed to be on top of the former – aware of the issues and making arrangements to deal with them.

Left: The RWMF, closed recently because a fire on its western boundary. The recycling centre is on the right.

Cr Melky, however, felt that council had some public relations catch-up to do and spoke (at length) of hosting a PR event on site for the commercial users. One would have to wonder about the attraction of this. Wouldn’t the commercial users just be happy to have their practical problems resolved?

Cr Melky also wanted to let residential users know that while recycling is a good thing, they can just dump all their recyclables into general rubbish if they so wish (being in a desperate hurry, apparently, to get elsewhere). He saw all this as working “with the needs of the customer”, not recognising the way in which such a mixed message would undermine council’s efforts to reduce waste going into the landfill.

Once again, after a 20-minute discussion, there was no real outcome. It turns out that council is organising an on-site event, including boot sale, for National Recycling Week in November – probably not quite what Cr Melky had in mind for those who don’t want to bother with recycling.

One by-product of the discussion is that Deputy Mayor Kylie Bonanni asked for landfill fees and charges comparisons with similar-sized communities. Director Greg Buxton will produce some figures he researched a few years back. He also made the point that “last year’s financials” show that the RWMF cost structure is about right in terms of cost recovery – council is not making a profit from the operation, so if fees were reduced, it would have to be subsidised from elsewhere in the budget. (This exchange took two minutes.)

Another by-product was that Cr Melky drew attention to a ‘good news story’ from the RWMF, which is that council will not charge for receiving old television sets on the first Saturday of the month.

Last night’s entire open meeting lasted for one hour and ten minutes. These two matters alone took up  more than half that time. Cr Melky is undoubtedly interested in making a difference in the community and, it would seem, in continuing in political life. He needs to hone his skills in working with others – pick his issues, identify them with clarity, concision and a clear strategy for action, and rein in his tendency to talk till you drop.

• Council will be applying for a grant from the Australian Government’s 20 Million Trees program. In response to a question from Cr Kudrenko Mr Buxton said the application will be for the maximum amount possible, with council looking to provide greater shade around its parks and ovals and further, to partner with Landcare on a restoration program of the Charles and Todd Rivers corridors’ indigenous habitat.

• The results of council’s open space survey are being compiled and hopefully a summary will be available next month. Council received well over 100 submissions to the survey. Cr Chansey Paech was concerned by that number, wanting to be assured of as thorough a consultation as possible on this, “council’s greatest asset”. His colleagues, however, were happy to wait and consider the officers’ report before taking the matter further.

• Council will begin charging rates on blocks at Kilgariff as soon as titles are issued and the properties are valued. Cr Paech raised the issue, suggesting that those who have already purchased should be charged a “base rate” similar to that applied to the town camps and Territory Housing properties.

• Council will avoid in future holding its meetings during Masters Games week. All members supported Mayor Ryan’s call to this effect.