Town planning: A commission for the people?

ABOVE: Computer enhanced photo from Anzac Hill, showing how the view would be affected by eight storey buildings (from left): On the long vacant ex-service station block in Wills Terrace, opposite the Catholic Church – very much in your face); Meeting Place and Melanka site (not hugely prominent); K-Mart car park – would obscure Billygoat Hill. 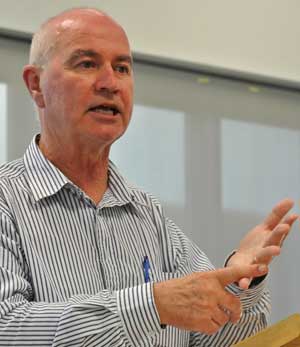 Eight storey buildings are now officially on the agenda for Alice Springs, and the government’s newest land management instrumentality is on the same page as one of the town’s most outspoken high-rise opponents, heritage architect Domenico Pecorari.

No, there isn’t a contradiction: The Planning Commission is not advocating tall buildings. It is displaying computer generated images showing how they would look in the townscape.

And the commission seems to at one with Mr Pecorari’s decades-long drive for giving the public a say in the planning of the town. This is how commission chairman Gary Nairn (at left) described its objectives last night: Strong voice for Territorians … real engagement … investigate complex projects from the outset –  rather than later through statutory development assessment … be independent … provide certainty … engage the community.

Mr Pecorari was one of a handful of locals (we counted 12) at the commission’s first visit to Alice Springs in its 20 months of existence.

The remainder of the crowd, about the same number, was made up of commission members, public servants and media.

“We are not an approval authority,” said Mr Nairn. The commission will advise the Minister, who will retain power over all land matters. The Development Consent Authority will continue to exist.

For Alice so far there is only a “Review of Planning Scheme Provisions” focussing mostly on the CBD. (In 2010 Alice Springs was given a “Framework Planning Scheme”.) 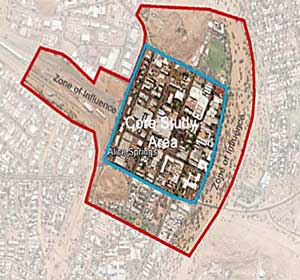 Mr Nairn’s presentation said: “The primary purpose of Zone CB (pictured) is to provide for a diversity of activities including administrative, judicial, professional, office, entertainment, cultural, residential and retail and other business activities with a commitment to the separation of incompatible activities.

“Building form and design is expected to be sensitive to the needs of pedestrian movement and facilitate the creation of safe and active street frontages and public places and a vibrant commercial precinct.”

Mr Nairn explained these various plans had different degrees of detail, and corresponding costs to produce them. The best way to proceed, he said, is to have triggers along the way, such as population growth, to decide when the next, more detailed, plan is required, and then produce it.

Speaking to the Alice Springs News Online he said the setting up of a Planning Commission was “a policy the CLP put together in Opposition and they took it to the election”.

We asked him whether the government jumped the gun starting the construction of the suburb of Kilgariff before the commission had been consulted about it.

NAIRN: The work on Kilgariff goes back quite a way.

NEWS: The actual spending of money on the construction could have been deferred pending an opinion from the commission.

NAIRN: They could have but they saw a need in another sense to go ahead with it. And I respect that. We can only do the best planning work and ultimately government make decisions for all sorts of reasons. I don’t have a problem with the Kilgariff subdivision as such. It provides a different product into the market. They are decisions of government.

NEWS: Would there have been a commercial advantage to use the infrastructure already in place on Ron Sterry’s land, the now stalled Coolibah Estate, in Ragonesi Road?

NEWS: Would, in your view, a conversation with the owner have been a good idea?

NAIRN: I would have to know a lot more about the details to make an informed comment.

NEWS: Will you recommend shifting the sewage plant and the dump away from the centre of the town. Absurdly, that’s where they are.

NAIRN: That’s the sort of thing you look closely at in doing an overall land use plan. It may be one of the projects we may have to look at sooner or later.

NEWS: There is an urgency because the council is proposing extending the dump into the adjoining Desert Park land.

NAIRN: It’s a particular aspect that may have to be looked at. If we were to look at the strategic aspect of the region we would certainly take that into account. We might get asked to give some advice. The Minister can ask us for advice on anything.

NEWS: What would be the process?

NAIRN: In the first instance the council may go to the government about getting access to other land. As part of that the Minister could say to the Planning Commission, can you take a strategic look at this part of the greater Alice area, how this is going to fit? We don’t want to be putting a dump into an area which really ought to be used for something else. He may ask us in that situation.

NEWS: Would you necessarily be involved? 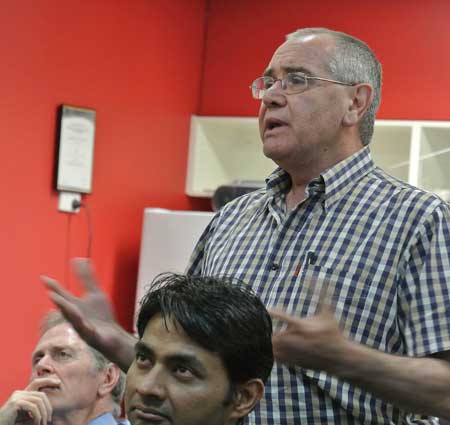 NEWS: What if the public were to approach you?

NAIRN: I would have to refer them to the minister. If the public said to the Planning Commission, you should be doing some more strategic planning in this area, I’ll take that on board. We are not an approval authority. We do strategic planning and then put that forward to the government or the Minister.

NEWS: The sewerage plant next to the dump, some two square kilometres, is owned by the government’s Power Water Corporation. The land is not encumbered by native title. It is a pretty valley. The Desert Park extends over the range.

NAIRN: If somebody wanted to do something with that, it would probably fall into the significant development criteria. That’s where that could be referred to the Planning Commission.

Only two of the nine commission members live outside Darwin: Stuart Duncan, the CEO of the Victoria Daly Shire Council, who lives in Katherine, and Ken Johnson, who lives in Alice Springs.

Dr Johnson is a retired public servant who was the Parks and Wildlife Regional Director from 1991, responsible for the southern half of the Northern Territory, and the CEO of Desert Knowledge Australia from 2002-2006.

The commission has two main roles: to develop strategic plans and planning policy, and to provide advice on significant developments, upon request from the Minister.

Several speakers at the meeting, including Mr Pecorari, urged the formulation of a masterplan for Alice Springs.

Mr Nairn said this “is potentially something the commission will need to give consideration”. 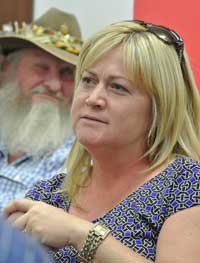 Leanne Southam (at right, in the background is Uncle Peter without whom no public meeting takes place in The Alice), Stephen Baloban and Mr Pecorari (above right) argued for a town plan.

“A masterplan similar to Darwin’s? It can be incorporated in the Planning Scheme,” said Mr Nairn.

That would include a properly working public transport system so people living far from the CBD, such as the “far flung” Kilgariff, don’t need to cars.

Said Mr Nairn: “From what I understand people are voting with their feet and buying blocks of land out there.

“I’m not sure we’re talking in opposite terms. It’s probably more terminology. The vision you have just described is exactly the sorts of things we’ll be working on” and major transport studies are a key part of planning for growth.

He said: “We are revisiting things like building heights so that you can do an economical development” for people wanting to live close to the CBD “and that will help to revitalise the city in other ways.”

Lee Morgan raised flood issues and Mr Nairn said the 3D video could be used for simulating the effects of floods. It had been done with the Brisbane River.

Chairman of the Rural Residents’ Association Rod Cramer spoke about the misuse of rural residential land for commercial purposes, such as one block whose owner was “running a road train business” from it. 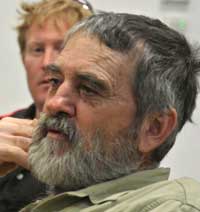 Mr Cramer (at right) said people are looking for “confidence and certainty” about their lifestyles when they were buying land.

Mr Nairn replied that dealing with illegal land use is the responsibility of the Development Consent Authority “but you’ve got to have an army of inspectors” and consider the cost of potentially prosecuting.

An encouraging inclusion in the commission’s tasks is the inclusion in its agenda of a “Draft Built Form Guidelines” about “the town centre, streets, buildings, shopfronts, landscape, fences, signs, materials, parking, safety, privacy, noise and environmentally sustainable design”.

It also wants to “connect the natural Todd River environment to Parsons Street and Todd Mall”.