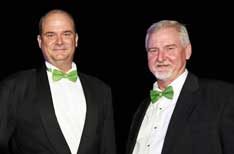 ABOVE: The Supreme Court to be built on the former site of the Commonwealth bank in Parsons Street. AT RIGHT: Dean and Kerry Osborne.

Eight storeys high, 600 car parks partly underground, and built by a Darwin firm that has its roots in Alice Springs: That’s the new Melanka site story, according to reliable sources.

They were speaking to the Alice Springs News Online on the condition of not being named.

Regarded as the barometer of the town’s future, the former hostel site in the middle of the town, standing empty for years, finally seems to be getting the go-ahead.

Chief Minister Adam Giles mentioned it recently, and the Alice Springs Town Council is understood to have received a behind-closed-doors briefing by Mayor Damien Ryan.

The firm said to be close to clinching the deal is Osborne Family Holdings (OFH).

According to its website it is “a family owned, Northern Territory based company that was established in Alice Springs in 1988.

“It has a proven track record in residential property development and investment.

“The business has continued to expand and owns businesses in both Alice Springs and Darwin.

“The group currently employs over 50 people in the NT,” the site says.

“The group has developed over $100m in residential property in the Northern Territory including Hastings Over Mindil, Parkview Estate, The Links Estate and Rho Court, and completed over $50 million worth of contract work over the past 20 years.

“Hastings Over Mindil, now regarded as the benchmark for quality, resort-style, residential living in Darwin.”

The Melanka project seems set to go ahead in tandem with the Sitzler Building in Parsons Street, the former Commonwealth Bank site. (A new drawing has now been released.)

Also, Paul Graham, of Asbuild, says following successful talks with the Town Council, work on the firm’s project of more than 60 dwellings on the old bowling club site in South Terrace will start before Christmas.

PHOTOS from top: The recent “grand opening” of The Avenue in Darwin, built by Osborne Family Holdings; and – below – a 3D render of the bowling club project.