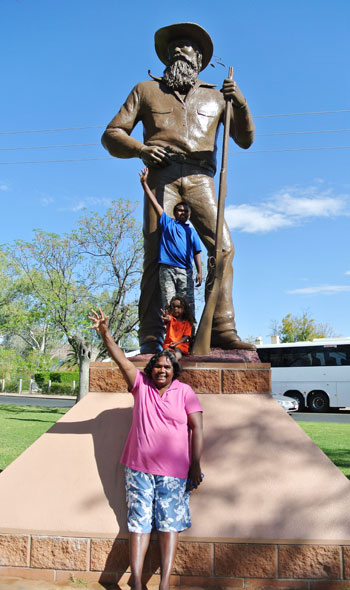 “I like it. I see he’s got a long rifle. He looks like Quigley Down Under,” says Natalie Madrill. She’s taking photos of her children, Ethan and Keithan Reiff, who have climbed onto the base of  in the park on Stuart Terrace.

Quigley, played by Tom Selleck, is the sharpshooting hero of a 1990 movie set in the Outback. His weapon of choice is a rifle with an exceptionally long barrel.

Does she know who the statue actually represents?

The Alice Springs News Online asked the Town Council about its plans for signage for the statue representing the explorer John McDouall Stuart.

They are coming along, says Director of Technical Services Greg Buxton. A council officer is in negotiation with the Freemasons over a plaque acknowledging them.

What? After council had to come up with $70,000 plus to install the statue?

The plaque will recognise the Freemasons’ “donation” of the statue itself, says Mr Buxton. There will be no plaque naming all the local Freemasons, as originally proposed.

Other plaques will tell viewers who the statue represents, what Stuart did, and a final plaque will acknowledge council and the community, with wording in progress.

And, why is there protective fencing between the statue and the road?

That’s there until works are undertaken to install a low fence and hedge, similar to that fronting the Royal Flying Doctor Service premises at the other side of the park. The fence will prevent people stepping onto the road as they step back to take photos.

The works are awaiting heritage approvals. There are also plans to define the space around the statue, similar to the curtilage around the stone cairn honouring the explorer, further to the east in the same park.

Meanwhile, the possibility of “collaboration” on a statue of an Aboriginal icon has been discussed in a meeting of the  partnership committee of the Town Council with native title corporation Lhere Artepe.

The minute referring to the statue continues: “A suggestion that Stuart Park be made a type of Reconciliation Park with various statues from the history of Alice Springs has been mentioned to the CEO. This could be a joint venture between ASTC and LAAC.”

Readers may remember a suggestion along these lines being made by native title holder Betty Pearce at the temporary unveiling of the Stuart statue. See ‘Stuart statue comes and goes’ in our foundation archive (scroll down to find the report).

KIERAN FINNANE’S ‘Icons, living and dead’, gives a detailed account of the process around the ‘gifting’ of the  Stuart statue in contrast to the processes undertaken in the revitalisation of Todd Mall. Published in Griffith Review 44, the full text is now available online.