Anzac Hill, a favourite destination for tourists for its views, but also an important  place for traditional owners, who know it as Untyeyetwelye, and returned soldiers.

Investigating support for a symbolic gesture to further acknowledge Anzac Hill as an important place for Arrernte traditional owners: an easy one for the Town Council? Not so.

At last night’s council meeting Councillor Jade Kudrenko moved to “engage stakeholders” in a proposal to fly the Aboriginal flag from the hill, alongside the Australian and Northern Territory flags. This would be a way of expressing council’s aim to “promote interaction between cultures and help maintain a cohesive community”, she argued.

She pointed out that the hill is known to traditional owners as Untyeyetwelye, that it is a registered sacred site and has been so since 1982, with custodians at the time making it “clear they were not seeking to limit access to the site”. 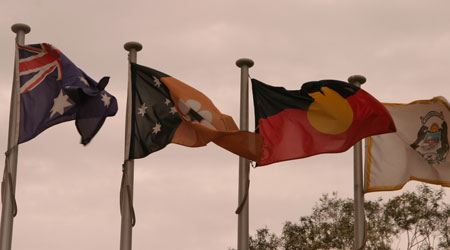 Cr Steve Brown took the lead in speaking against the motion, arguing that Australians, including Indigenous Australians, had fought under one flag. Flying the Aboriginal flag would suggest that Indigenous Australians were separate from other Australians in this regard. Such a gesture might look “inclusive” but in fact it would be “exclusive”, he argued. He has no objection to the Aboriginal flag flying from other places around town (it does fly outside the Civic Centre, see photo above) but he personally feels that the Australian flag “represents all of us”.

Under the rules of debate for this formal council meeting a speaker for a motion has to be followed by a speaker against. Mayor Damien Ryan had seconded the motion and now commented on the appropriateness of its timing as Australia considers recognition of Indigenous Australians in the Constitution. He felt strongly that the proposal should at least be explored.

Cr Brendan Heenan, while saying he did not want to oppose the motion, nonetheless agreed with Cr Brown’s view.

Cr Eli Melky wanted to speak against but, to his frustration, could not as there was not another speaker for.

Cr Kundrenko appreciated the views expressed and said she did not want to detract from the significance of the hill as a memorial to the Anzacs. But she reminded her colleagues that at this stage she was only seeking to explore the proposal through discussion with the local RSL, the Department of Veterans’ Affairs, native title holder corporation Lhere Artepe, and the Aboriginal Areas Protection Authority.

A vote was called and it looked at first as though this motion might go down. Crs Chansey Paech and Liz Martin were absent. Deputy Mayor Kylie Bonanni was reminded that she could not abstain, that she had to vote one way or the other. She said she was undecided but once assured that at this stage her vote would only mean that the possibility be discussed, she voted for. Cr Heenan also finally voted for, while in the negative were Crs Brown, Dave Douglas, and Melky.

Cr Melky protested at the way the debate had been handled, with him prevented from expressing his view. The Alice Springs News Online this morning asked him why he did not move to suspend standing orders, which if supported would have allowed free-flowing debate. He said that he did not think he would have found a seconder for such a motion.

“I’m in a hostile council,” he said, suggesting that it would have been “polite” for Cr Kudrenko to move the suspension or to have brought her motion to a committee. The Mayor might also have suggested the suspension in the interst of democracy, said Cr Melky.

Meanwhile, he has forwarded correspondence to Cr Kundrenko that he has received from ex-service men and women who oppose the Aboriginal flag being flown on Anzac Hill as “divisive”.

That question of Cr Brown’s ‘conflict of interest’

As he had promised at the committee meeting a fortnight ago, Cr Melky last night again raised the issue of Cr Brown having had a conflict of interest when he spoke from the chair of council’s Seniors Coordinating Committee about the White Gums retirement village in which his family is involved.

Cr Melky not only demanded an explanation of why he had not declared a conflict of interest but wanted an apology for offensive comments Cr Brown had made about him on this site.

Cr Brown dismissed both, suggesting that it was only a bid by Cr Melky to get his phot in the paper. Cr Melky wanted that ruled offensive but Mayor Ryan in the chair and CEO Rex Mooney did not respond, despite Cr Brown being aksed to repeat the comment.

Cr Brown said the minutes of the Seniors meeting were inaccurate, a point confirmed by CEO Rex Mooney. A funding application for the proposal was apparently not mentioned by Cr Brown. The minutes will be corrected.

Cr Brown also said that his reference to the White Gums project had nothing to do with any decision-making, it was simply a matter of mentioning already publicly available information of community interest.

Cr Bonanni, who was present at the Seniors meeting, sais she did not perceive a conflict of interest and shouldn’t the CEO confirmation that the minutes were inaccurate be the end of it.

Cr Kudrenko appreciated Cr Melky for his contribution to council transparency in raising the issue but suggested that, now it had been aired with Cr Brown providing an explanation, it could be left to the CEO to deal with and council could get on with the night’s agenda.


Cr Melky had received no satisfaction at all regarding his offense at “personal attacks” but he let the matter go, reminding Cr Brown to take more of the Local Government Act.

Tree farm ratified by council in 2013

A tree farm at Albrecht Oval, for growing street trees to greater maturity before planting, was given the go-ahead by council last year, Director of Technical Services Greg Buxton reminded councillors last night.

The report to council a fortnight ago was a progress report, not a justification for setting it up, he said.

Cr Eli Melky said he had been in conversation with local horticulturalists, who were questioning the cost-benefit to council of the tree farm rather than using them as suppliers.

He still wanted to see a cost-benefit analysis of the project. Mayor Ryan asked him to share his research with other councillors fo further discussion at committee level.