Bradshaw school girl back from Japan with gold 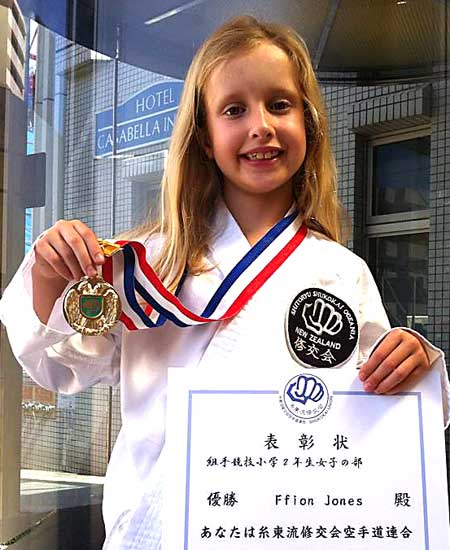 Eight-year old Ffion Jones returned with a gold medal to Bradshaw Primary School this morning from the 65th Shukohai Karate Anniversary Championships held in Kobe, Japan, where she topped the Under 9s Kumite division.

The result is an extraordinary achievement given that Ffion has only been learning karate for two and a half years. Facing international competitors, Ffion kept her focus, and fought her way to gold.

Teams from all over the world assembled in Japan for a week of intensive training including training with Yamada Haruyoshi Sensei who leads the Shukokai organisation.

Yamada Sensei holds many prestigious positions such as 9th Dan President Shito-Ryo Shukokai Union, and is a member of the Japanese Olympic Committee. Ffion was able to have one on one coaching with Yamada Sensei prior to the competition.

Ffion began her training in New Zealand at Shukokai Karate, based in Onehunga, Auckland.  She moved with parents Steve and Anita to the Northern Territory earlier this year, and without Shukokai training available locally began learning Shotokan Karate at the Alice Springs Youth Centre.

Ffion attends two training sessions a week in Alice Springs, each 90 minutes long. She also has extra tuition, and puts in hours of practice in her own time at home.