Another day for living 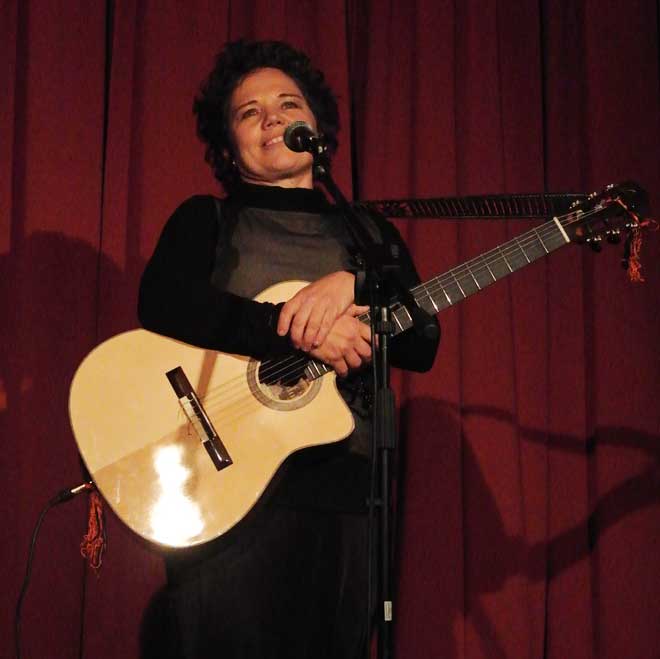 A smiling acquaintance passing in the street, mother of boy child, a presence in community meetings, occasionally on stage with others and her guitar – this was all I knew of Ruth Apelt until I made the connection one day between her and her partner, and the sad fact that he was dead, too young.

He was Peter Taylor, former CEO if the Centre for Appropriate Technology and before that a senior bureaucrat with the now defunct ATSIC. He died quite suddenly in May 2013, aged just 54.

Last month Apelt told something of his, her, their story in a moving one-woman show. It was a farewell, at least for a while, to Alice Springs but also a kind of introduction. Few knew of her substantial performance career before she came here – won a national song-writing award, recorded an album in Nashville, supported international acts like Ani DiFranco, Janis Ian, Luka Bloom – in evidence from the opening bars of her first song. On the small intimate stage at the Totem Theatre she was at ease with her guitar, an old friend, with the polished instrument too of her clear high voice and its powers of expression and feeling. 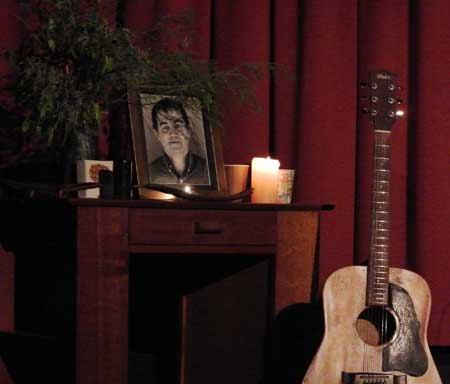 More than this, her songs, his poems – artfully orchestrated to tell their story over two Acts – were delivered with frankness and courage. Not much more than a year after Taylor’s death, Apelt was taking a risk that she acknowledged. She had not been able to get through a rehearsal without crying, but she did on the night. Tears or a broken voice would easily have been forgiven but in transcending them, she took her experience beyond the heart-breakingly personal to something very generous for the audience – an affecting reflection on life’s varying fortunes, on something of the dilemma for many living in this place, and an affirmation of the will to live.

If all this had been in general terms, it would have lacked the power Apelt summoned. After opening with her invitation from “a desert road” and evoking Taylor’s presence and absence – “these dreams won’t last for long” – she took us back to her days as a rebellious student in Brisbane and early musical success as the composer of “a minor hit” which she sang. She was looking to shape her life as a young woman beyond the received wisdoms of a conservative society and upbringing. She spoke and sang frankly of seeking sexual adventures and fulfilment, and of the hypocrisy women encounter in this area: “The culture comes down, a man’s a man / But a woman … who scores / alone / who explores / is … a whore / a crime / alive.”

She found affirmation in feminist culture and its revival of women’s traditional knowledge: “Juniper berries and tansy tea, Mother of the moon and sky / What is the world going to make of me / will I get to live ‘ere I die?”

For her, part of getting to live was going to be having a child but it took her a long time to realise that this was what she wanted. There was a risk of time running out – if it waits for no man, it certainly doesn’t for a woman, she quipped from the stage.

Her songs here evoked solitude – “The Lady she sits all alone in her kitchen, aware of the time ticking by / There’s a frown on her face – though everything’s in place”. And moments of realisation – “something here reminds me of me.” Then the gift of encounter – “sure been taking your time”. And the move to commitment – “I’m gonna hold on tight to love – this time”.

But love as we might, we don’t get to hold on. It’s a universal experience, coming later if fortune is kind. In coming early as it did for Apelt and Taylor and their son, it had a character peculiar to our place and times. 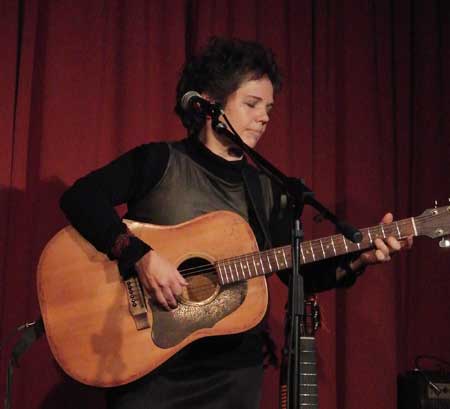 Apelt spoke of Taylor as an existentialist and humanist, whose search for meaning lead him to despair, although he was depressed as well. In his own words: “Empty or emptier / that’s the shape / you can live with.”

“We are lost children of the Christian tradition,” Apelt commented before asking, “What are we doing in this place?”

Taylor loved “the power of imagination” and hoped “that would bring us forward”. But that “doesn’t give you a lot to hang on to”, she said.

Specific to Taylor’s existential pain was the shattering of the self-determination era in Aboriginal politics. He had been with ATSIC for its 15-year history (1990-2005), a “golden boy bureaucrat” during a time of great hope and optimism, when everyone felt “they were doing the right thing”. He felt its unravelling and destruction greatly although Apelt said he had begun to accept it, to trust in the necessary evolution of things. As he wrote:

“I have seen how the sky operates, drifting precisely
I can concentrate on a forest, in a humiliated landscape
laughter breaks out and a lake bursts open
with energy it never knew it had.”

Apelt has also learnt this lesson: “Some things I don’t know anymore / the answer may be clear to me some day … Gold streaming through my bedroom door / Another day is calling for living.”

For now Apelt is leaving. This show – which will surely be performed again, here and elsewhere – was a rich goodbye gift.