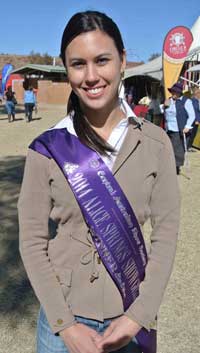 No smoking rules at the Show led to the cancellation of the annual fixture’s most spectacular events, the rodeo, the campdraft and the bronco branding (see below Alice Springs News Online video shot at the Show in 2011).

Organiser Rebecca Cadzow, from Mount Riddock station, says negotiations with the show society broke down when it threatened to shut down the events if anyone connected with them was caught smoking – anywhere on the showgrounds.

“We were expected to police it,” says Ms Cadzow. “It was too much of a risk.”

On top of this, the show society wanted to charge the organisers $4500 for using the lights in the rodeo arena.

Ms Cadzow says it was disappointing: “We don’t want the Show to die. We were going to bring the bush to town but we just could not take the risk.”

She says the campdraft committee was formed only recently. Last year the campdraft at the show was the only “affiliated” one at an agricultural show in the NT, and the only one to be held on grass.

The bronco branding – rarely to be seen anywhere in Australia these days – had been staged for nine years except last year when the camp draft had a very big number of competitors.

In bronco branding, a mounted ringer uses a lassoo to rope a beast out of a mob of cattle, drags it to a frame, three ringers tie its legs immobilising it, and apply the brand – in this case not a hot iron, but a dob of paint.

Ms Cadzow says apart from having to transport competition stock for some 200 kilometres, the animals would have had to be removed from the show grounds at an unrealistic time after the event finished.

The rodeo stock – bulls and horses – would have had to be brought in from South Australia at a cost of $8000.

“We are a young committee,” says Ms Cadzow. “We could not take the risk” of any of the events being stopped for reasons outside their control.

The impasse occurred early this year and the show society had every opportunity of finding alternate attractions, Ms Cadzow says. The classic cattle industry events will now be held at the Harts Range races next month. Show society acting president Rosie Gibbins did not wish to comment on the issues.

Meanwhile the show society has donned its thinking cap to stop the decline of “entries” – the items hundreds of people make, draw, paint, knit or grow and enter into a string of “sections” whose winners get blue ribbons.

Ms Gibbins says the number of entries, just under 3000, were down by about 800 this year. Photography, for example, was down to 200 from normally 400 exhibits.

Refocussing on agricultural and horticultural produce may be one way of reversing the trend: “After all, it’s an agricultural show,” says Ms Gibbins.

Asking the NT Government to divert some arts funding to the Show may also boost the effort.

Children’s entries were much more numerous than adults’ – especially in the craft sections.

The crowd seemed to have been down marginally, to still a huge 18,000 people over the two days, but final numbers are still being calculated, says  Ms Gibbins.

While there appeared to be some gaps in the commercial pavilions, the number of stall holders was about the same as last year, but some had downsized their display space and some had moved outside where there were more than ever.

Some government departments, too, had joined together instead of having separate displays. This did not include the Chief Minister’s stall.

Ms Gibbins says the tickets pre-purchased at the three IGA stores were popular – $3 off the $18 gate price for adults, $1 off the $8 for kids.

She says there’s a lot on in Alice at this time of the year, with the Camel Cup this weekend, and people just don’t seem to have the money to patronise everything.

The sideshow alley was the usual hit. The Showmen’s Guild members had come from Mt Isa for more than a week in town, spending money on servicing their vehicles, buying tyres and food, and paying a camping fee to Baltherskite Park.

They’re off up the road now, to the Tennant, Katherine and Darwin Shows.

PHOTOS (from top): • Miss Showgirl Sarena Hyland. • Some sections were well supported. • Some were not. • Bronco branding fell victim to the smoking ban – the event at the Show in 2011 features in the video below by Alice Springs News Online.