More than a driveway, it’s a story 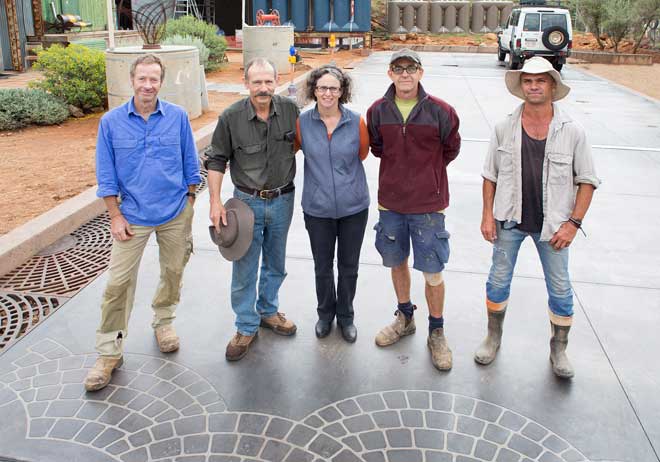 In a town bent on ever hardening its face with lowest common denominator concreting – filling garden beds, roundabouts, median strips – at 8 Hele Crescent owners Mike Gillam and Maria Giacon show what is possible with thought and imagination.

On the day I visit it has rained – “a gift,” says Gillam, as it demonstrates the way everything done on the site has been in response to what happens when the skies open.

8 Hele is at the base of a hill of significance to traditional owners. In a downpour water runs off the hill in sheets and, in the past, straight through the block to the scarcely adequate stormwater drainage in the street. The building has been inundated, the cracker dust driveway turned to a quagmire and, perhaps most importantly, precious water has been lost to the vegetation on the site.

As the driveway provides access to three existing businesses (with more to come) it had to be hardened, at least in part, and the drainage issues needed to be resolved. 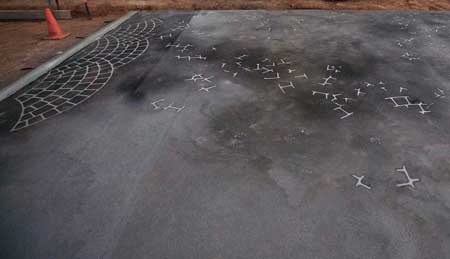 Budget dictated concreting for the driveway but not any old concreting would do. That’s Gillam – his love of the expressive potential of materials and structures is the basis of all the building work he undertakes. But it was also important for a site where the business activity is in the creative industries. To date 8 Hele is home to art suppliers and framers, Chapman and Bailey, the design and bespoke shoemaking studio, Elbow Workshop, and Dallas Gold’s gallery, RAFT Artspace.

What Gillam came up with was an ingenious mix of recycled construction and landscaping materials and a carefully designed plan for the concreting.

“I want it to be here and looking good in 100 years’ time,” he says. “Concrete has quite an environmental impact so it shouldn’t be something that can be torn up without a second thought.”

Black oxide in the mix gets away from standard grey, disguises tyre marks and, scattered with varying intensity across the surface, gives it a lovely charcoaled cloudiness. White concrete strips lighten the overall impression and at the same time anchor the signature marks. For these Gillam used off-the-shelf stencil templates – suggestive of a European fan but also of senna bushes and spinifex – and cut them to his fancy.

The simple fan shape is preserved at the entrance, morphing into a generic caterpillar in the next section before scattering (above left) and re-assembling as flying forms, suggestive of moths and raptors. All of this is in reference, of course, to the surrounding natural environment and in particular to the Arrernte stories associated with the hill and other areas of Mparntwe.

The fan shape is repeated in the recycled tree guards – formerly protecting trees in Todd Mall, bought from a scrap metal dealer. They have been laid alongside the drive to cover gravel-filled pits, allowing runoff to soak into the ground. The 15 carparks at the edge of the site are also gravelled for the same purpose.

At the rear a retaining wall curves around to preserve three native orange trees, hardy survivors of decades of industrial activity on the site. More concrete, another creative opportunity. Gillam stuck foliage to the inside of the shutters before the pour, so when the shutters were pulled away they left lovely botanical imprints. Between these are some seemingly random rectangular grooves, imprints of off-cuts from Chapman and Bailey frames. These are the small details that catch your wandering eye, adding interest to every surface and making subtle connections, visually and narratively across the site. 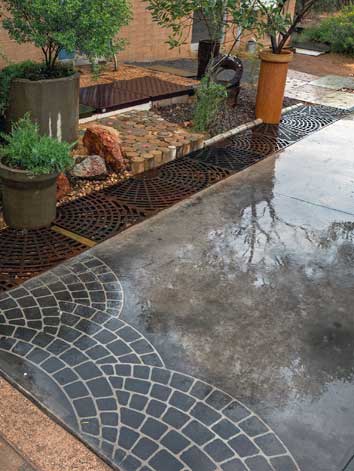 Behind the retaining wall a retention pond has been dug out. Some planting at its edges is already being complemented by nature, with little herbs and bushes springing up.

When the retention pond is full a channel takes water along the fenceline, soaking into the ground as it goes, further encouraging the growth of existing mulga trees and other natives.

The whole of the driveway has been set lower than the ground in front of the building, in part so that run-off sheds into the root zones of the plantings there, but also with a view to creating a respectful transition, from carpark to the businesses proper.

Gillam estimates that the site can now take more than 100mm of rain before water would flow onto the street. Two ranks of water tanks, like rows of pillars, dominate the view at the rear, boldly declaring the site’s stormwater-harvesting intention. Alongside the building three concrete cylindrical tanks take up the theme. They will take water from the pavilion roof that has yet to be added, while doubling up as plinths for sculptural pieces and also as “clustering points” when there’s an event on the site, such as an exhibition opening at RAFT. The water all the tanks collect will be used to irrigate the gardens during dry times.

Gillam is not afraid of variety, in fact the opposite is true. In front of the Elbow Workshop (above right) there are half a dozen different porous surfaces to create an entrance porch, keeping dust down and again allowing water to penetrate the ground and nourish the vegetation.

All this owes a large part to inspired invention and careful planning but wouldn’t be possible without willing and skilled trades people. Gillam sings their praises which modestly they accept, acknowledging also the satisfaction of contributing towards a site that looks like no other in Alice Springs yet speaks of this place with the distinction and artistry it deserves.