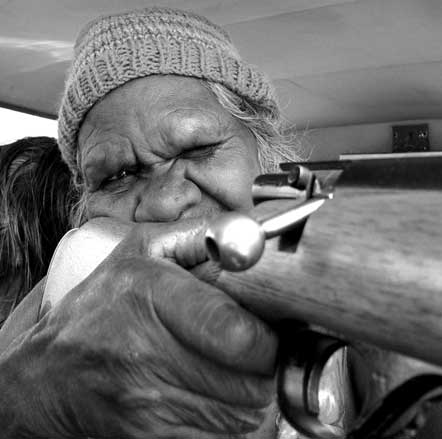 This righteous desert babe left us a few days ago. Her life was not a procession of unparalleled, certifiable, gold medal, high-achieving wins, but an impressive battle scar and zesty tribute to the vitality of soul-force. She was seventy-five, and taken out suddenly by a massive stroke. While she was in hospital five years ago trying to work out how to use her body without the left side co-operating after the first stroke, we hung out talking extensively and I wrote something of a story of her life – the bits that seemed relevant to me at that time. Here is a much abridged version, published with the permission of Amanyi’s daughter, Linda Stanley. She also gave permission for photos of Amanyi to be published.


The most important thing that Amanyiwants you to know about her life, is that she has worked hard from one end of it to the other. From being down on her knees scrubbing wooden station floors with a rag and a bucket of soapy water; to standing in Belvoir Street Theatre, Sydney, sophisticatedly clothed, sharing stories of Maralinga fall-out to gaping Sydney audiences in Ngapartji Ngapartji; her activity has tracked the aching change and obligatory metamorphosis that her people have undergone in one lifetime. Her primary function throughout all has been as a provider for her family, which she has always and will always do with uncompromising and self-sacrificing determination.


I’m still discovering names for this woman. Nyuwara is the latest, her first name – but it’s a sorry name for Tjunkaya’s daughter so we won’t use that one. Mrs O’Brien at the station house gave her the name Dora and used to cry out, “Dora! Dishes time!” Now the nurses cry out, “Dora! Medicine time!”

She received her first surname from her first husband, the stockman Don Okai, which was later misinterpreted by welfare people as Haggie. Centrelink still politely address her as Mrs Haggie now. I’ve received phone calls from people looking for a Mrs Walkabout, which was her father’s English name. Sometimes she calls herself a Swan. many of us call her Amanyi, a name she reclaimed from childhood when somebody else’s Dora passed away a few years ago.

Amanyi is a Pitjantjatjara woman. Her ngura, birthplace, is Urampinyi – which became Tempe Downs Station in 1883. Her parents were employed at the station when she was born around 1936.

Urampinyi is an important site for Minyma Kutjara – a women’s ilpinytji (love magic) Tjukurpa which describes the journey of the two women Nyarapai and Anyingkira and the man Arapi from western South Australia to the caterpillar place, Alice Springs. Many details of this Tjukurpa are known and shared only with women. Amanyi, by virtue of being born there, carries with her a responsibility to that Tjukurpa, which includes tangible duties at such times when women come together to perform ceremony. 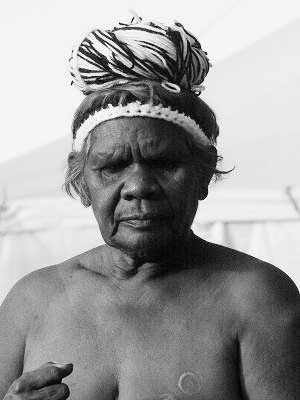 Amanyi is a solid contributor to the practise of women’s law and ceremony. While watching the enduring steps danced, she sits among a chorus of experienced women singing and yelling out approval as the faces and the bodies of the dancers change and the spirit women appear before them. A vibrant metaphorical cast hums across the revered space.

She was a profoundly beautiful young woman, declared by all and referred to by the bones that frame her face still. Since the first stroke, the body she once inhabited with unreformed grace and confidence has become the object of sympathy and amusement. One arm flops about like a sleeping baby who will not wake while one leg sedately refuses instruction from above. Curious bumps and scars and excess belly are housed in remarkably luscious skin kept supple with rubbing medicines from many places and margarine when there is nothing else. Amanyi is a margarine faithful.

Amanyi attended school at Utju, where a ‘mix-up’ of Pitjantjatjara and Arrernte children studied in a rudimentary building between the dramatically steep cliffs that gave the mission its Pitjantjatjara name. She still speaks Arrernte and basic English alongside the tongue she was born into, Pitjantjatjara. Amanyi’s first resonant impression of Ernabella Mission was seeing school children, high-school age, walking around completely naked (as was the mission rule in those days). “Nyanyi uti!” Pubic hair exposed!

She met her tall, dark and handsome Yankunytjatjara husband one hot Christmas time at Henbury Station. She borrowed a white wedding dress from another station girl and was married in the Christian way by Pastor Albrecht. They lived together at Henbury, then moved around between Palmer Valley Station, Erldunda, Mt Ebenezer and Tempe, he working as a stockman and she as domestic help.

She gave birth to four sons, travelling by station utility to Alice Springs hospital. She also had a daughter, Elizabeth, born in the bush with just one kangkuru (older sister) as midwife, laid in the warm sand to be cleaned, umbilical cord burned off with hot sand, put into smoke to ensure strong growth and a healthy body and mind. All of her babies were put into puyu. It is a common in Pitjantjatjara areas today to hear people insulting others by saying “Nyuntu puyu wiya!” You were not smoked! Which implies deficiency and speaks of the breaking down of this tradition.

Amanyi has an unchallengeable knowledge of the natural world and the food and medicine sources abundantly offered by it. She fondly reels off names of plants they gathered for mai as children: kulypurpa, tawal-tawalpa, unturngu, ili, awalyuru, tjanmata, itunypa, witita, kaliny-kalinypa, she says she’s almost eating each one as she speaks the name.

In adult life, Amanyi developed ngangkari powers and most often used them in the healing of children. She was not a practitioner who removed tangible objects from patients’ bodies, as some very powerful ngangkari are capable of, but would use her hands and breath to heal and drive out illness. She has recently lost these powers through consuming the delicious meat of tjirilya (echidna). This she did knowingly, as it is Anangu law.

Amanyi’s first husband was murdered in the late 1960s. An extremely difficult period, she and the four small children lived between Mission Block in Alice Springs and Finke Mission to the southeast. After several years, she was taken to Ernabella and became involved with a man of strong character named Stanley. 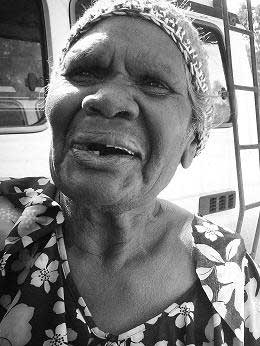 Stanley was already married with six children to Nungalka. The two women fought in a traditional manner whereby Nungalka ritually beat Amanyi and stole her children. Amanyi retreated to Finke but was retrieved by Stanley. After this lawful process had been completed, the two women formed one family, physically and emotionally, with their husband. They shared responsibility over children. Amanyi had one more child with Stanley: Linda.

In the homeland movement of the 1970s, the large extended family moved out to Tjalyiritja (Youngs Well) where they camped initially with no buildings, later with one small house and eventually another. From the homeland they would go out into surrounding country hunting all manner of game. Stanley would drive and Amanyi would almost always ride shotgun, rifle in hand. She became an expert huntress even taking ‘running shots’ at malu (kangaroo). If she missed, Stanley would charge after the beast in the Toyota. They ran a small bakery turning white flour into endless loaves of yeasty bread and dug red river gum roots from the creek bed, producing carved artefacts for the tourist trade.

At Tjalyiritja, with the support of the arts centre, Amanyi and Nungalka established themselves to produce batik – which Ernabella Arts Inc. had become famous for in the 1970s. They undertook all parts of the complex wax-resist dye process themselves, outside in the dust and the sun, initially with no buildings. Each day they would add a new colour to the fabrics and hang them out to dry before adding the next layer of quintessentially Ernabella designs in wax.

Over the course of her life, Amanyi has lost: her mother, her little sister, her father, her first daughter, her first husband, her fourth son, her first son, her little brother, her older brother, her second husband, her older sister, her second son, her third son and countless other not so immediate family members. Her capacity to survive loss is incomprehensible to me. She speaks of these tragedies with the weary acceptance of finished sorry business. News of recent death is dressed in very ritualised and deeply felt grief – tjituru-tjituru.

Together with Nungalka and other senior women such as Pantjiti Tjiyangu, Amanyi was instrumental in establishing Apunkanu, a sacred area to be used for large ceremonial gatherings of women from across the region. The women were determined in their hunt for an appropriate location, and eventually were granted land by Simon Tjiyangu and Donald Fraser.

The story of the work Amanyi and other senior women have done together with APY Land Management, tracking and baiting foxes, tagging and observing and recording waru (rock wallaby) behaviour is now framed by a new song in ancestral fashion. The inma, invented, sung and danced with such reverence, joy and affectionate pity describes waru mothers looking up at the sky, watching their babies being taken away to a breeding program in Adelaide by aeroplane, and crying. The women emotively compare the experience of the waru mothers to the mothers of the stolen generations. 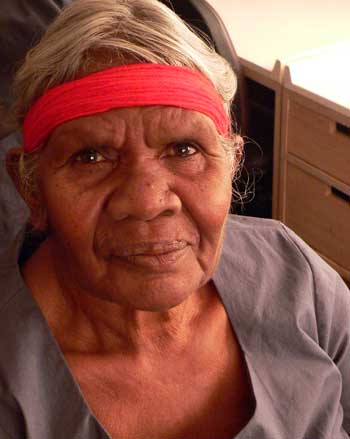 Apparently after the young waru were taken away, the mothers abandoned the rock hill on which they had been living en masse and shifted to another, a completely comprehensible action to Anangu, who will always shift camp after death or loss.

When Amanyi watches television, she accompanies it with a constant energetic narrative, which documents, questions and pre-empts the triumphs, heartbreaks and actions of all characters, in all programs, no matter how banal. Amanyi once discussed with me her suspicion about a documentary she had seen on the theory of evolution. She confided to me that if any of this was true, she considered it likely that whitefellas were actually descended, not from monkeys, but from donkeys.