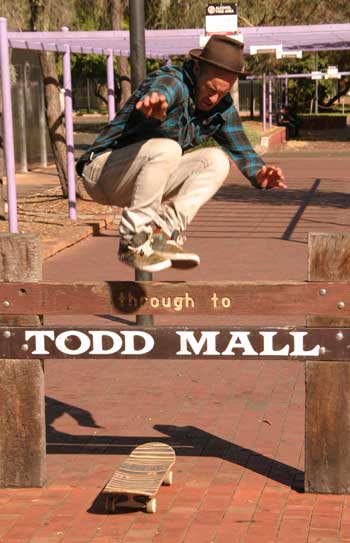 The opportunity of being in on the ground floor on policy formulation is a strong reason for him joining the Palmer United Party (PUP), says youth activist and businessman Matty Day.

“We need good, strong policies for young people and people on low incomes who are getting a raw deal at the moment,” says Mr Day who came to Alice Springs eight years ago as a youth worker.

An articulate contributor to the town’s public life – including by pushing for innovative responses to the economic downturn – Mr Day, 38, ran for council in the last by-election. He is married and the father of four children.

He is an accomplished skateboarder and a national representative of the sport.

He has organised many skateboarding events in the town and recently opened a shop in the CBD selling skating gear and clothing.

Mr Day says he’s never before been a member of a political party: “I am not defecting. I want to help PUP leader Alison Anderson getting the party going in the NT.”

Mr Day says he has no plans to run for a seat.

He says youth services in the town need to be co-ordinated, there needs to be a youth outreach service working at night and “a safe and engaging place where young people feel they have ownership, can access services they may need, or just hang out and socialise.”

Mr Day is pictured doing a skateboarding trick in the CBD in the days before it was banned. Photo from our archive.