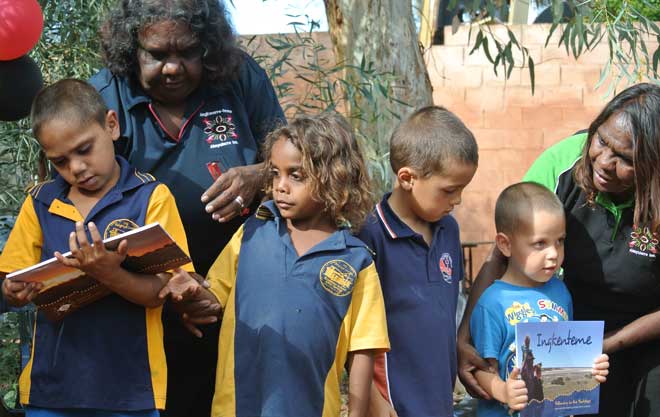 Above: Passing on culture: Amelia Turner (left) and Pamela Lynch with Arrernte children, celebrating the launch of the book and film, Ingkenteme.

Aboriginal culture “is the heart and soul of the Northern Territory,” Chief Minister Adam Giles told his audience. He identified culture as one of “the four things” his government is focussed on and he tied that focus to investment: “We see a lot of investment across the country … in Aboriginal affairs. It might be building roads or building houses, running health programs, [but] I don’t think we put enough into investment in culture”.

He also tied his statement to his own personal history. Even though he doesn’t often talk about it – “I just get on and do my job” – on Wednesday he did, telling the crowd that his father was a Kamilaroi man from north-western NSW but “I didn’t have any culture passed down to me, no Aboriginal culture, I grew up without that. I think a lot of Australians, a lot of Aboriginal Australians miss out on that.”

This was all warmly received by the strong group of Arrernte traditional owners, their families, friends and well-wishers who had gathered to launch a book and a short film about the work they have been doing. They go by the name of Akeyulerre, in reference to the Arrernte name of Billy Goat Hill, “recognised as an important healing place for our people”, as co-chair of the organization, Pamela Lynch, explained.

The centre grew out of meetings of elders in the late 1990s, concerned about “Arrernte people mainly coming together for funerals” and worried that “some of our young people had lost their ways”, Amelia Turner said.

In a green-painted wooden house at the foot of the hill they created a gathering place and healing centre “following Arrernte ways”. This is a town base for their activities and a home away from home for many. Amelia’s mother, prominent elder Margaret Kemarre Turner (MK), says she goes there every day “to be with families”.

But an important part of the work is for the elders to take children and young people out onto country – their traditional lands – so that Arrernte cultural knowledge can be passed on. While the NT Government provides core funding, that keeps the doors open and employs a manager, this activity is supported by Anglicare NT through the Commonwealth-funded Communities for Children program.

At first Akeyulerre called these trips Bush Schools, but now they carry the name Ingkenteme, meaning “following in the footsteps”. The learning has to be done on country, explained Dan Murphy, recently employed on the program, because for Arrernte people “everything comes from the land – culture, land, law, healing, kinship, relationships and responsibilities, strength of families, it all comes from the land”.

Indeed it is country as well as the elders that determines what is taught during the trips. As MK writes in the book, titled simply Ingkenteme: “It teaches you when you see it. You learn about the stars. You learn about the wind, the direction of the wind blowing, north wind and south wind. You learn where the rain comes from, and where the wind comes from. Because a lot of kids don’t learn about this in school. These sorts of wind are different winds we relate to, and we’ve got to look out for them.”

The trips take place during school holidays and on weekends, and are not thought of as replacing mainstream education. On the contrary they “complement and strengthen kids’ engagement with mainstream education”, said Dan, “because the kids are immersed in learning and that’s good for them, surrounded by elders and family. They get that message that learning is important, and as their cultural identity is strengthened they get more self respect and confidence and this translates into positive things in all aspects of their lives, especially at school.”

In Ingkenteme Teresa Penangke Alice, credited with starting the Bush Schools program, writes about it how it began: “I was teaching kids at Santa Teresa school … about culture – about the seasons, the animals, bush medicines – where to get it, how to get it, how to cook it, what to use it for, how to apply it. The children were outside in the bush – feeling and touching and seeing things. That’s how they were learning. It was the real thing … It really meant something to them, and it meant something to me as well.

“But back in the classroom, it was like those four walls didn’t give any stimulation. Other children who hadn’t been with us in the bush, didn’t have the same understanding …

“I was thinking if I want to teach my kids to read and write Arrernte I need to take them out bush where we will be doing Arrernte all the time, instead of coming back and writing things down. To keep the words, the Arrernte language, in their brains, they need to be out there in the bush experiencing things …”

Teresa also writes with feeling about her personal experience of losing touch with her Arrernte culture as a teenager when she was away at boarding school. She’d come home for holidays preoccupied by “all that English stuff”: “The old people were taking me out and I was just ignoring them … feeling ashamed of all their stories and the dancing.” It was her mother, “a really strong woman”, who brought her back into line, insisting she take part in ceremonies: “I said, ‘Mum, I’ve been away too long’. And she said, ‘That’s the problem, just dance.’ So I did, I just danced.” Teresa went on to do her teacher training – and now is undertaking a Masters degree in cultural education – but when she was about 21 she also started to get interested in her culture again.

Above, from left: Janelle Palmer, Shirleen Hayes with baby Teal, and Janisa Ryder with  the Interrentye Body Products range.

The experiential learning that she promotes is the foundation of another Akeyulerre programs, a social enterprise producing and selling bush medicines, called Interrentye Body Products. At the launch young Janisa Ryder had the product range nicely arranged in a corner of the garden, with other young women helping with sales and keeping her company.

Janisa started working in the enterprise the year before last, getting involved in all aspects – collecting the plants, making them into rubbing ointments and selling them to customers, at the Todd Mall markets, at conferences, at the Alice Springs Show.

Where did she learn about the plants and their properties?

“All my childhood,” she said, recalling that her grandmother would treat her every time she got sick, rubbing her, bathing her with different medicines.

For at least six years Akeyulerre, incorporated in 2000, was unfunded. Today their core funding enables them to attract other support, four dollars to one, including from private donors.  But in the current climate – of economic rationalism at the federal level, and of law and order responses at the Territory level – one might have expected a hint of nervousness about the future at last Wednesday’s launch, the first time Akeyulerre has hosted such a public occasion. Instead, having laid solid foundations and built on them steadily, an atmosphere of calm strength and deep satisfaction prevailed, with an overwhelming sense of conviction that this is a right and necessary way to proceed – not an atmosphere that you come across every day in the context of Aboriginal affairs and communities.

As the Chief Minister said: “I don’t think we hear enough about Arrernte people, not enough about the traditional owners of the country we are standing on. It’s something we should celebrate more of, we should appreciate the local people here more and more. The strength of the community, of the local Arrernte people of Mbantua country, is something that needs to be cherished and passed on down the different generations.”