Ulysses bikers: On the road again 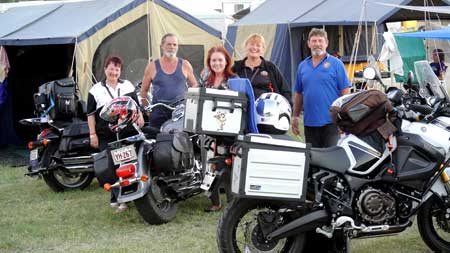 It’s one of the more than 1000 big toys of the big boys – and girls – at the annual gathering of the Ulysses Club, motto: “Growing old disgracefully.”

I put to its owner, Chris Pusey, from Bundaberg: for 50 grand you could get a car, couldn’t you?

Geoff and Kathy Shew from Kalgoorlie have a TourOz with a turbo charger which drives its price to $55,000.

Is it a converted Harley, I ask innocently.

Geoff: “Oh my God. That is sacrilege. It’s not a Harley. It’s got a Ford 1600 motor in it. I’ve got a Harley sitting at home being lonely. This thing will kick most things off the road.” 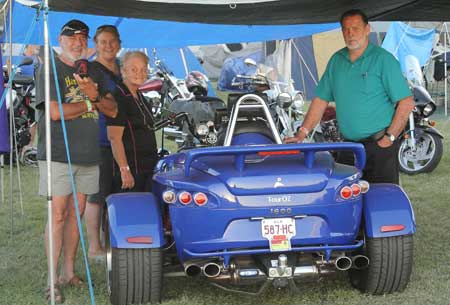 Sheryl: “They are a lot of fun and they are very comfortable. You see a lot more of the country.”

What about in a corner, being a three wheeler?

Chris: “It won’t tip. You’d have to do something wrong to make it tip.”

How fast do you go?

Chris: “Whatever the speed limit is.” (Laughs.)

And without a trailer?

Geoff: “How long’s a piece of string? I don’t know whether your cousin or brother or someone you know is a policeman.” All laugh.

These four visitors to Alice have at least two things in common with the other 2500 campers on Blatherskite Park: they are over 40 and love bikes.

They’re in town for the week-long Ulysses AGM.

From the show grounds, access to which is tightly controlled, they spill over into the Mall. Yesterday every table except one in an outdoor eatery was occupied by Ulysses members, swapping yarns about the trip to The Centre, thousands of kilometres for most of them.

Today and tomorrow they will fan out into the East and West MacDonnells and many will call in at The Rock on the way home.

Diminutive Dianne rides a 750 Honda. Why is she doing it? “You get the bugs in your teeth and the wind in your hair.”

But that’s what the other guy just said.

Dianne: “Well, we are motorcyclists! That’s what happens.”

The variety, standard and value of the equipment are staggering: gleaming bikes, many towing sophisticated camper trailers, standard caravans and motor homes side by side, with the yarns flying thick and strong.

Annette: “I’ve never been to The Centre before. It’s something I wanted to do. It’s just a beautiful place.”

“Everything.” Tracey points at the setting sun, turning the hills to the south a vivid orange.

Not so good is the smell from the sewage plant just across the fence. The view is great but the smell is not: that’s how the 2014 Ulysses AGM will be remembered, she says.

Dianne has all her gear strapped to her bike – no trailer. Same with Annette, who is on a 800cc Suzuki. The two women ride together and usually overnight at a camping ground.

Has she ever dropped her bike?

Annette: “Yes. My first time at a Ulysses AGM at Townsville, doing a U-turn. That’s the worst part of heavy bikes, riding slowly, until you learn how to do it. Remember the throttle.”

Did she hurt herself?

Why doesn’t she ride pillion with partner John?

“Because he doesn’t stop. We are not riding with Ian because he goes from A to B and doesn’t stop in between. We left on Monday from Bundaburg and he left on Wednesday. We just take our time.”

Dianne: “Once you have ridden a bike you can’t be a pillion.”

How can you avoid getting a sore bum?

Ian: “What you do is you set the things up. Handle bars are important, positioning your arms. There are now air cushions to sit on, air riders. You pump them up. You just have to be careful you don’t slide on them. Sheepskin seats, it all keeps your sweat off your rear end.”

Dianne: “And you stop at least every hour, or two hours.”

Ian: “Or three hours or four.”

It seems partners Ian and Annette don’t get to spend much time together on these trips.

Ian: “We meet up every now and again. When she needs a decent sleep.”

Ian tows a trailer behind his 1500cc Suzuki Boulevard which carries – amongst other gear – a swag, esky and a 3m by 6m tent. The trailer top converts into a queen size bed.

Annette: “He’s got the camper. I’ve got my camp. Di and I have just been riding, setting up tents and when we want an extra day we get a cabin and spend an extra night there. Just having a rest.”

Ian stops pretty well anywhere he feels like: “I’ve got a swag. I just roll it out and go to sleep.”