Council’s desire to move quickly towards new skate-boarding facilities is welcome, but Matty Day, youth advocate and leading light of local skateboarders with extensive experience in the industry, says the plans before council are flawed and cautions against haste.

Councillors last night considered a preliminary master plan drawn up by a local architectural firm. There were two options, fairly similar but with Option B recommended to them as a “shovel-ready project” – in other words, all set to go once finances are secured.

The price tag was estimated at half a million, an amount that “amazed” Mayor Damien Ryan. 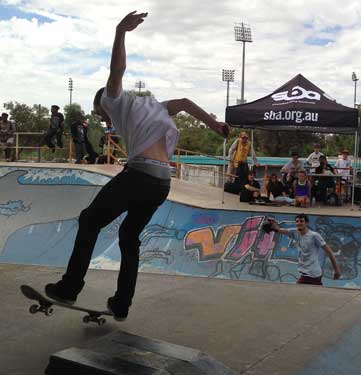 Councillor Brendan Heenan wanted to know what the figures were based on: had they been out-sourced to firms who do skateparks all around Australia?

Right: The recent Alice Springs Titles at the skatepark.

No, they were based on in-house construction data, replied Director of Technical Services, Greg Buxton. He said he would review the costs prior to council’s Ordinary Meeting at the end of the month.

Cr Heenan’s question was spot on as was Cr Eli Melky’s wish to consult with stakeholders – skaters and riders – before committing to the plan, says Mr Day. He also appreciated Cr Liz Martin’s understanding that providing a better space for skaters is a great opportunity for council to work with the town’s youth.

Skatepark design is a matter of expertise, says Mr Day, and council had before it excellent examples of what has been achieved in the regional towns of Port Augusta and Geelong. In the case of Port Augusta, it was with a similar price tag.

He had provided these in a detailed submission, done without fee in his own time, that urged council to seek direction from the CONVIC Constructions, original builders of the skatepark, and Skateboarding Australia, of which he is the local representative. (He is also the owner of a shop with skateboarding wares.)

On the basis of current plans, council would be investing in expensive new facilities that would be partially un-skateable and potentially dangerous.

For example, the plans include two very large sets of stairs but with no run-up, which renders them useless. In any case, such stair sets are for very advanced skaters, says Mr Day, and thus not suitable for the majority of local users.

The peanut bowl either does not have a flat bottom or its size is inadequate – an elementary mistake, he says.

There are a numbers of sheer drops whose safety issues are dealt with by fencing, but that is an inefficient use of materials. Skaters basically want to be able to ride out of every obstacle, moving on to the next: “The key to a skatepark is good flow!”

Council already has a relationship with CONVIC Constructions. Why don’t they go back to them now to finish off what was started, Mr Day asks. Why spend money instead with an architectural firm which appears not to have knowledge of this specialist field?

CONVIC have 600 skateparks around Australia to their credit, with the “latest and greatest” being the Fremantle Youth Plaza, “a huge success”, says Mr Day.

“This is the type of facility we should aim for in the long term for Alice Springs,” he says, suggesting that it be located in the vicinity of the Flynn Church as was recommended in the Todd Mall revitalisation consultation.  Such a state of the art facility would cater to multiple user groups, with a fitness circuit and ball sport spaces as well as riding surfaces.

In the meantime, council should proceed to “finish off and fix up” the existing facility, which is developing significant safety issues. His submission included photographs of cracked surfaces, eroding embankments, and gravel and sand spilling on to the skatepark from its un-landscaped surrounds, greatly increasing the chance of injury to skaters and riders.