After 30 years the Todd Tavern has shut its doors to the Monday Jam Nights of the Alice Springs Desert Music Club. But don’t despair, the club is far from dead, merely taking a short break, with plans to restart mid-May at the Memo.

Chairman Michael Carmody says he has high hopes for the new location and looks forward to the new Mondays at the Memo: “See you every Monday night, for the rest of your life,” as he puts it.

Time will tell if the new venue becomes as popular as the old one used to be. But for now, it’s no more crowded tavern until 2am. No more people squished along the stairs and railing of the second floor, sloshing their beer onto the ground. No more employees calling in sick on Tuesday mornings.

Phil Blackburn recalls some nights with more than 700 in attendance. “Crazy nights,” he reminisced. “The traveling musos that used to play couldn’t believe we used to pull those sorts of numbers on a Monday night.

“Herman Marcic and myself started the original jam session in the front bar of the Stuart Arms Hotel, but it got so big we moved it to the Todd Tavern.” 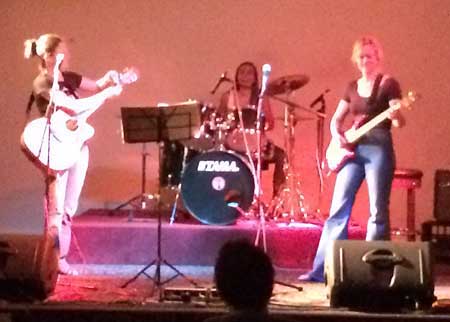 The party scene had morphed into soda water nights and there wasn’t enough money in it for the pub.

It was a place where anyone could go and play live music in a public setting. From locals to backpackers, amateurs to professionals, these performers shared their talents, all for the love of music – and a gold coin donation.

It was a bittersweet final jam last Monday evening with a giddy, full house. We asked Carmody, what three words he would use to describe the final Monday night: “Girls, diversity and packed”.

We couldn’t agree more. The acts were as diverse as one would expect from our colourful, lovable little town. There was an all-girl jam from The Kates (yes, all three are named Kate). They combine a sultry feel of country and folk meeting Stevie Nicks.

Our one and only Jenn even dabbled on the drum kit with them, bringing a hint of rock and Aussie crawl to the set.

Professional flutist, Markus Kuchenbuch, from Germany, made his first jam night appearance and boy, was it one to remember. He has only been in Alice Springs for two weeks, but he bravely took to the stage with his flute (or “booga whistle” as we’ve been told).

Wanting to keep in the spirit of the jam, Markus offered an open invitation for anyone to come up and drum alongside him. Local drummer Phil Morosoli quickly jumped at the opportunity to hit the skins.

It was a unique combination of instruments, mesmerising improvisation. Markus’ innate sense of humor shone through his flute and microphone, improvising bass sounds as he was lacking an impromptu bassist to join him.

Our favourite of the night goes to Thorny Devil Samba Bloco of Central Australia. Band members on stage included Carmen Robinson on surdo (bass drum), Sarah Thorne on tambourine, Be Ward on agogo (bells), Rana Mitra directing and on repinique (tom drum) and to keep the improv coming, Kuchenbuch jumped in with his flute.

The booming drums, whistles and bells were completely infectious. Nearly the entire audience were clapping or tapping their toes.

Since 2012 Thorny Devils have been providing us Samba and Batucada beats of the Brazilian Carnival. They will be playing at the Wide Open Spaces opening, the first long weekend in May 2014.

For Mitra and many other jam goers “the sessions were great for people to get experience playing in front of a supportive crowd, getting much needed airtime, up on stage in front of people despite their nerves.

“We also have people sometimes getting up and jamming along with us, so it’s great for networking too.”