Kumunjayi Pollard was hunted “like a kangaroo”. This was among statements made by Lawrence Collin, one of the defendants accused over the death of Kumunjayi Pollard in February last year, during a record of interview with police. The hearing looking at whether he and his co-accused will be committed to stand trial has adjourned while Magistrate John Birch considers the records of interview made by most of the defendants and other documents of the prosecution’s brief against the accused.

The court has heard evidence of attacks on Kumunjayi Pollard in two locations – Ilparpa Camp (location 1 on the aerial photo) and Charles Creek (location 2)– on the night of February 18. His decomposing body was found two days later on the Stuart Highway north of the town (location 3).

Lawrence Collin admitted to being at Ilparpa Camp where Kumunjayi Pollard ran before he was “captured”, said prosecutor Stephen Robson today in summarising his brief.  He said Mr Collin admitted kicking the deceased and hitting him on the shoulder with a stick. Later he said “that’s enough” – Kumunjayi Pollard could be taken “to that mob in the creek”, referring to “the Andy mob”, said Mr Robson.

The court was to hear today from Paul Andy – described as “an important witness” – but he could not be found. If the accused are committed to stand trial ­ there may be an application by defence counsel to hear from Paul Andy and cross-examine him before a jury is empanelled.

Mr Collin also told police that the deceased was stripped of his shirt and pants and that he, Mr Collin, was in the car when it got back to Charles Creek, said Mr Robson.

Christopher Daniel in a first record of interview denied any involvement with the events.  In a second interview he eventually admitted that he was present during the events at Ilparpa and Charles Creek.

He admitted to kicking Kumunjayi Pollard four times and hitting him four times when he ran to the fence between Ilparpa camp and Yirara College. He admitted using a stick to strike him at Charles Creek.

He also referred to petrol being put “on private parts” of  Kumunjayi Pollard in Charles Creek. (Evidence was heard about this from witness Petrina Andy, but no evidence of burning of the genitals was detected at autopsy.)

Robert Daniel – whose grey-white hair and beard suggest that he is the oldest of the accused (three others having greying beards or hair) – walked into the Alice Springs police station on February 21 and gave a voluntary statement. He admitted to being involved in taking Kumunjayi Pollard’s body in a car to the north Stuart Highway. Mr Robson said the prosecution contends that there was a “degree of minimisation” in this statement.

Grant Inkamala in a record of interview given on February 26 said he saw the deceased “sleeping” at Charles Creek before he took himself off to the Central Land Council to drink. Around midnight he was picked up by the car bearing Kumunjayi Pollard’s body. When the occupants of the vehicle saw a police car, they went “the other way” (presumably to the north Stuart Highway).

He said the car ran out of fuel; when he saw it alight he walked away. He did not admit he was an active participant in the attack on Kumunjayi Pollard.

Kasman Andy – who looks to be the youngest of the accused (probably in his twenties) – was with Robert Daniel at the police station on February 21. He said he had been driving the car and wanted to show police where the body was.

Mervyn Wilson, an uncle to Kumunjayi Pollard, admitted in a record of interview that he was with the group at Ilparpa Camp but claimed to have ceased his involvement at Charles Creek. He said he had gone to Ilparpa to “teach his nephew a lesson”. He said he had hit him on the head with a stick and on the leg with an iron bar. When Kumunjayi called to him, “Uncle”, he said “You’re the one who wanted to fight me.” 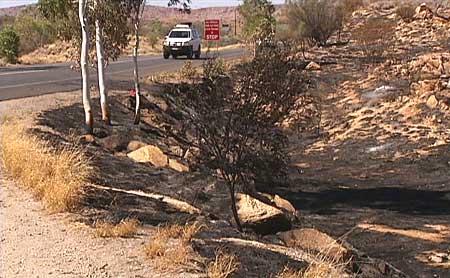 He claimed he told Kasman Andy to take Kumunjayi to the hospital on the way to Charles Creek. He said at Charles Creek Grant Inkamala had tried to cover Kumunjayi’s face with a sheet and he told him not to; he claimed that at that point Kumunjayi was still a live, although he was “talking very slowly”.

Only Silas Raggett, aka Chicka, did not give a record of interview. But a forensic scientist identified his DNA on the jeans found near Old Timers’ Camp on the Stuart Highway, which also had DNA matching the deceased’s and were thought to be the pants stripped from him. DNA and blood of the deceased were also found on the front of Mr Raggett’s shorts.

DNA and blood of the deceased were found on Mervyn Wilson’s thongs and shirt.

There were no forensic findings relevant to Lawrence Collin, Robert Daniel, and Grant Inkamala.

Court resumes in the morning.