The tiny Aboriginal community of Titjikala south of Alice Springs is sending a delegation to the national Keep Australia Beautiful, Australian Tidy Towns awards after winning the top spot in the Northern Territory.

It now hopes to win the Australia wide competition to be announced on Friday at Victor Harbour in South Australia.

The national judge, Dick Olesinski, who has judged the program for 20 years, comparing Titjikala with the six other finalists across the country, said: “The efforts of Titjikala are outstanding. 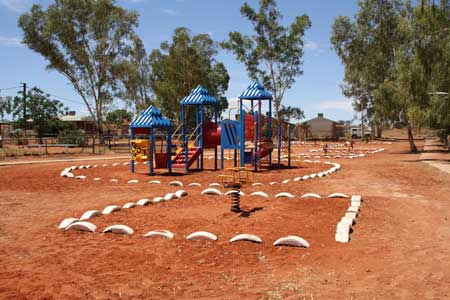 The organisers said in a media release that most residents of Titjikala have long ancestral relationships to the region with significant traditional knowledge of survival in the extreme arid conditions of the Simpson Desert.

“Solar energy hot water systems are used on all houses and all additional residential power is supplied by local generator through a pre-paid power supply system. Consumers directly learn efficient power consumption and adjust to living effectively by this power supply.

“The Marie Shilling ‘Naive Style’ painting, born from pride of their territory win, was lovingly created with Marie holding the brush while eight local artists and well respected colleagues from the Tapatjatjaka Art and Craft Centre contributed in an advisory capacity, as a very proud community of celebrating artists. The painting shows a ‘snap shot’ of a day and life in Titjikala.”

Other state and territory finalists announced include Nundle in New South Wales, Mundubbera in Queensland, Sheffield in Tasmania, Wangaratta in Victoria, Walpole in Western Australia, and Kingston South East in South Australia.

The awards are sponsored by the Do the Right Thing Program of the Australian Food and Grocery Council’s Packaging Stewardship Forum.