Anderson not losing sleep over dismissal from CLP 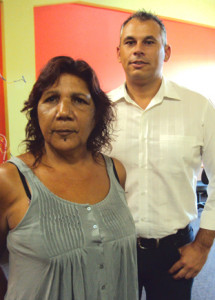 Rebel Parliamentarian Alison Anderson expects to be dismissed from the Alice Springs branch of the CLP but she says she will wear this as a badge of honour for someone whose main focus is representing her electorate.

She says she will put her case to the party’s management committee but does not expect to be able to keep her membership in the ruling party. Ms Anderson says she is not losing sleep over it.

She will now move to the cross benches together with Top End bush Parliamentarians Larissa Lee and Francis Xavier. The three, as a tight group, will vote on legislation on its merits, on “good policy”.

No deals have been done with Labor nor independent member Gerry Wood.

Ms Anderson says the reason for the rift is entirely the government’s failure to keep election promises for the 18 months it has been in power, involving “heaps of money”.

She says there is a long list of unfulfilled promises – including football lights at Hermannsburg, men’s sheds at Santa Teresa and Ampilatwatje, where senior men can educate young men, and sealing of the Santa Teresa road. So far just $10m has been allocated for the road, enough for just 10km of the 85 kilometers.

In Alice Springs shops are closing, there are no major projects: “Nothing is happening.”

Ms Anderson says the trio’s “suggestion” that bush MLA Bess Price, elected with keen support from Ms Anderson, be removed as a minister was not a personal issue, but related to Ms Price’s “non performance”.